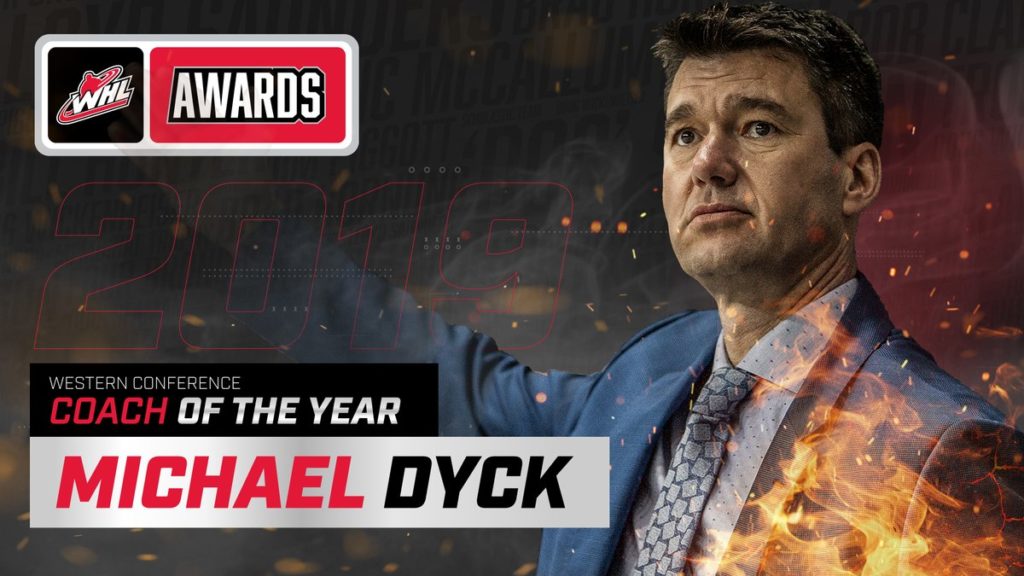 The Vancouver Giants are pleased to announce that Head Coach Michael Dyck has been named the WHL’s Western Conference Coach of the Year. The Western Hockey League announced all league award finalists for both the Western and Eastern Conference earlier this afternoon. You can find all award nominees here.

In his first season as head coach of the Vancouver Giants, Michael Dyck led the team a Western Conference leading record of 48-15-3-2 and the second best overall record in the Western Hockey League. The Giants winning percentage of .743 was the second highest recorded in the 18-year history of the franchise. With Dyck at the helm the G-Men surrendered the third fewest goals-against (162) and had the fourth-best goal differential (+66). The Giants also finished in the top-five in both power play (24.6 percent, fourth) and penalty kill (84.9 percent, second). Nine different Giants either matched or surpassed their previous career highs in points this season with Dyck in charge.

For his career, Dyck’s WHL record behind the bench is 180-135-21. Internationally Dyck has served as Team Canada Pacific’s Head Coach twice (2009-10 and 2011-12) at the World Under-17 Hockey Challenge. He also served as Alberta’s Head Coach at the 2015 Canada Winter Games and an Assistant Coach for Canada at the Youth Olympic Games in 2016. Dyck’s playing career in the WHL spanned five seasons (1985-1989). He played with the Calgary Wranglers, Brandon Wheat Kings and Regina Pats.

The Eastern Conference Coach of the Year was Marc Habscheid of the Prince Albert Raiders. One of Dyck or Habscheid will receive the Dunc McCallum Trophy for WHL Coach of the Year at the WHL Awards Banquet which will take place on Wednesday, May 1 in Red Deer, AB.

Michael Dyck’s Giants will take the ice for Game 1 of their first-round WHL Playoff matchup with the Seattle Thunderbirds on Friday, March 22 at 7:30 PM at the Langley Events Centre.