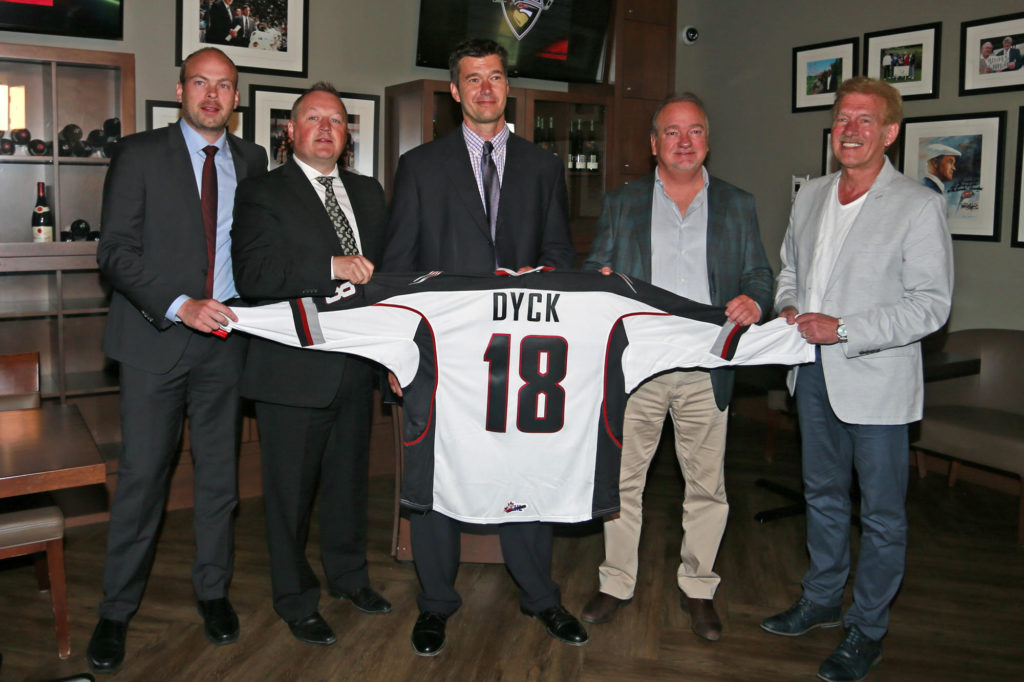 The Vancouver Giants announced Thursday that Michael Dyck (Lethbridge, AB) has been named the franchise’s new Head Coach. Dyck was officially introduced as Giants Head Coach this morning at a media conference that took place at Pat Quinn’s Restaurant at Tsawwassen Springs.

“I am very honored to once again join the Vancouver Giants organization,” said Michael Dyck. “The Giants have always been a model franchise in the Western Hockey League and I am very excited to contribute to that legacy and lead this exciting group of players.”

“We are very happy to welcome Michael and his family back to the Vancouver Giants,” said Giants Majority Owner, President and Governor Ron Toigo. “Michael was somebody that we identified as a great fit early in our hiring process. He is held in high regard by former players and fellow colleagues within the hockey world.”

Internationally Dyck has served as Team Canada Pacific’s Head Coach twice (2009-10 and 2011-12) at the World Under-17 Hockey Challenge. He also served as Alberta’s Head Coach at the 2015 Canada Winter Games and an Assistant Coach for Canada at the Youth Olympic Games in 2016. Dyck’s playing career in the WHL spanned five seasons (1985-1989). He played with the Calgary Wranglers, Brandon Wheat Kings and Regina Pats

Giants General Manager Barclay Parneta adds, “Michael Dyck is the right man to lead us into this exciting chapter of Vancouver Giants hockey. His past success speaks for itself and when you combine his passion, work-ethic, and his ability to motivate and mentor today’s young hockey player – He checks all of those boxes for us.”

Dyck adds, “I am thankful to the Toigo family, the Giants ownership group, Barclay Parneta and the entire Giants organization for welcoming my family and I back to the Lower Mainland.”

Dyck will be joined in Vancouver by his wife Charlene. Together they have three children: A daughter Bailey, and two sons Carson and Brennan. Bailey is 19 and is attending film school in Vancouver. Carson is 17 and will be playing with the AJHL’s Okotoks Oilers next season and Brennan is 10 and will be entering the fifth grade.

The Vancouver Giants are thrilled to welcome Michael and his family to the organization.

Season Tickets for the 2018-19 season are available now!