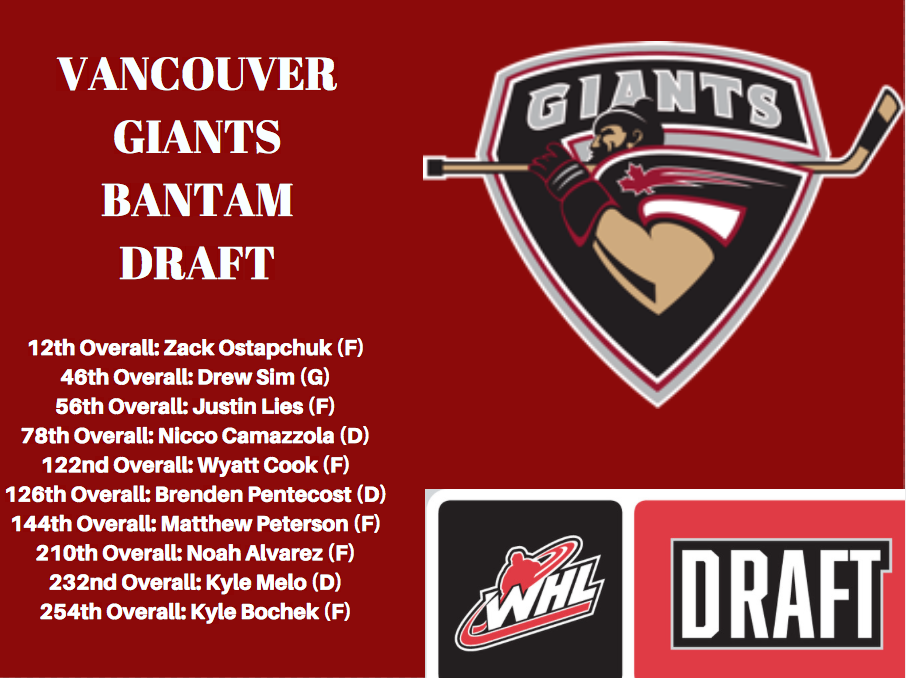 It was a busy, rewarding day for the Vancouver Giants on Thursday in Red Deer, AB.

General Manager Glen Hanlon and his team of management and scouts added six forwards, three defencemen and a goaltender to the Vancouver Giants organization.

Ostapchuk, a center, checks in at 6’2” and 175 pounds. In 30 games with Northern Alberta Xtreme’s Bantam Prep program he registered 24 goals and 21 assists for 45 points along with 12 penalty minutes. He finished with one goal and four assists in six games at the 2018 John Reid Bantam Tournament and added four assists in five games at the Alberta Cup with Team Northwest.

Extremely honoured and excited to be selected by the @WHLGiants. Looking forward to the years to come with such a fantastic organization.

“Getting drafted by the Vancouver Giants is a dream come true,” said Zack Ostapchuk moments after learning he had been selected by the Giants in Round 1. “Vancouver was always the team that I wanted to play for, and I was through the roof when I heard my name called by the Giants.”

Ostapchuk adds, “Skating, size and strength are all positive parts of my game. I also take pride in my 200-foot game. Putting the puck in the net is important, but keeping it out of your net is twice as important.”

“Zack is a competitor who brings a solid mix of skill, size and strength up the middle,” said Giants General Manager, Glen Hanlon.  “He leads by example in all areas of the ice, skates well and does whatever it takes to win. We’re thrilled to welcome Zack and his family to the Vancouver Giants organization today.”

“Getting drafted by the Vancouver Giants is a dream come true. Vancouver was always the team that I wanted to play for, and I was through the roof when I heard my name called by the Giants.”

Zack Ostapchuk moments after learning he had been selected by the Giants in Round 1.

Congrats to @OHAEdmonton student athlete Drew Sim on being selected in the third round, 46th overall, by the @WHLGiants!#WHLBantamDraft pic.twitter.com/AdiHcqiSQv

Sim is 6’2” and 190 pounds and played with the OHA Edmonton Bantam Prep program and helped guide them to a league championship. In 16 regular season games Sim posted a record of 13-0-1 with a 2.05 goals-against-average, a .920 save percentage and three shutouts. He was 4-0 in the playoffs with a 1.00 goals-against-average and a .966 save percentage. He played on Team Central at the Alberta Cup and helped them win the tournament championship.

“I was super excited when I heard the news that I was drafted to the Giants,” said Sim who’s currently in Philadelphia competing in the 2018 U15 World Selects tournament. “I’m a big goalie and I like to use my athleticism to be mobile and to be square to the shooters coming in on me.”

“Drew Sim’s compete level is off the charts,” adds Giants General Manager, Glen Hanlon. “He’s a proven winner who rose to the occasion numerous times throughout his season. He’s a big-game goaltender that we’re happy to add to our franchise.”

Sim was the second goaltender selected in the 2018 WHL Bantam Draft.

Congratulations to Flin Flon’s Justin Lies (left) who got drafted by the @WHLGiants 56th overall and The Pas’s Chase Bertholet (right) who was drafted 94th overall by the @Rebelshockey pic.twitter.com/bbnNjUiMcX

“I’ve been working towards this for a long time, and It’s great to see it all pay off today,” said Lies. “I tried to focus on coming to the rink prepared to play well in each game. I’d say my skating and my shot are my two best attributes.”

Giants Director of Scouting Dan Bonar adds, “Justin’s a natural goal scorer who competes hard and skates exceptionally well. He adds a strong element of character and skill to our organization.”

Congrats to @BWCAcademy student athlete Nico Camazzola on being selected in the fourth round, 78th overall, by the @WHLGiants!#WHLBantamDraft pic.twitter.com/XXcpQwOMJD

With the 78th overall pick in Round 4, the Giants selected their first defenceman and first BC-born player when they grabbed Burnaby native Nicco Camazzola.

At 6’1”, 179 pounds, Camazzola, a left-handed shot suited up in 30 games with the Burnaby Winter Club Bantam Prep program. He notched two goals and eight assists for 10 points along with 54 penalty minutes. In four additional playoff games he registered 10 penalty minutes.

Thank you @WHLGiants, I am incredibly proud and honoured to be selected by my home town team in this years draft.

Nicco competes hard, has a strong skill-set and plays a strong two-way game that should translate well at the next level,” said Giants Head Scout Terry Bonner. “He’s a steady skater with a strong shot and has loads of upside moving forward.”

Cook checks in at 6’0”, 180 pounds and just capped off a solid offensive season with the Sherwood Park Flyers. In 33 games with the Flyers he posted 22 goals and 15 assists for 37 points while adding 62 minutes in penalties.

“Wyatt Cook is legitimate scoring threat each time he takes the ice,” said Giants Director of Scouting, Dan Bonar. “He doesn’t back down from physical play, he skates hard and puts himself into great position offensively. This is a great pick for the Vancouver Giants!”

Cook was the third (and final) Alberta player selected by the Giants on Draft Day.

Four picks later the Giants went back to British Columbia with the selection of Surrey B.C. native Brenden Pentecost.

Congrats to @DeltaWildHockey student athlete Brenden Pentecost on being selected in the sixth round, 126th overall, by the @WHLGiants!#WHLBantamDraft pic.twitter.com/Wt2veRBTFl

Pentecost, a left-shooting defenceman, stands 6’1” and 160 pounds and played in 2017-18 season with the Delta Hockey Academy’s Bantam Prep Green program. In 30 games he recorded six assists and 10 penalty minutes and added an assist in three playoff games.

“Brenden is solid in all areas of the ice,” said Giants Head Scout Terry Bonner. “He’s not fancy, but he’s a ‘presence’ on the ice. He makes a strong first pass, defends hard and plays the game with the type of fire that we’ve been coveting in this draft.”

It was an honour to be selected by my hometown team @WHLGiants I would like to thank my family friends and coaches for getting me to we’re I am now.

Pentecost was the second defenceman and second B.C.-born player selected by the Giants.

In Round 7 the Giants stayed in B.C. to select Delta native Matthew Peterson.

With the 144th overall pick in the seventh round the Giants are proud to select forward Matthew Peterson from Delta, BC!

Terry Bonner says, “Matthew plays the game hard all the time. He loves to score, loves to hit and demonstrates the type of leadership that will be very valuable to the Vancouver Giants moving forward.”

Peterson was the third and final B.C.-born player drafted by the Giants on Draft Day.

The Vancouver Giants are happy to select forward Noah Alvarez (Los Angeles, CA) in the 10th round, 210th overall!

Giants Scout Mike Green comments, “Noah is tremendously skilled. He has terrific offensive instincts but has an equally impressive work-ethic. We’re thrilled that he was available to us at this stage of the draft.”

Noah Alvarez was the only American-born player selected by the Giants on Draft Day.

So proud to be apart of the @WHLGiants organization! Thank you to everyone who has helped me come this far

“He’s the type of player that always wants the puck on his stick,” said Giants Head Scout Terry Bonner. “He’s a leader who played top-unit power play and penalty-kill for his team. He competes hard every shift and shows no fear.”

Melo was the third defenceman and second Manitoba-born player selected by the Giants in the 2018 WHL Bantam Draft.

With their final pick in the 2018 WHL Bantam Draft, the Giants went to the Prairies again to select Moosomin, SK’s Kyle Bochek.

Giants Scout Bill Gibson says, “He plays the game hard. He’s willing to go into the corners to make a tough play and brings great hands and a strong shot to the table as well. He’s the kind of player that brings a little bit of everything to each game he plays.”

Bochek was the sixth forward and lone Saskatchewan-born player selected by the Vancouver Giants at the 2018 WHL Bantam Draft.