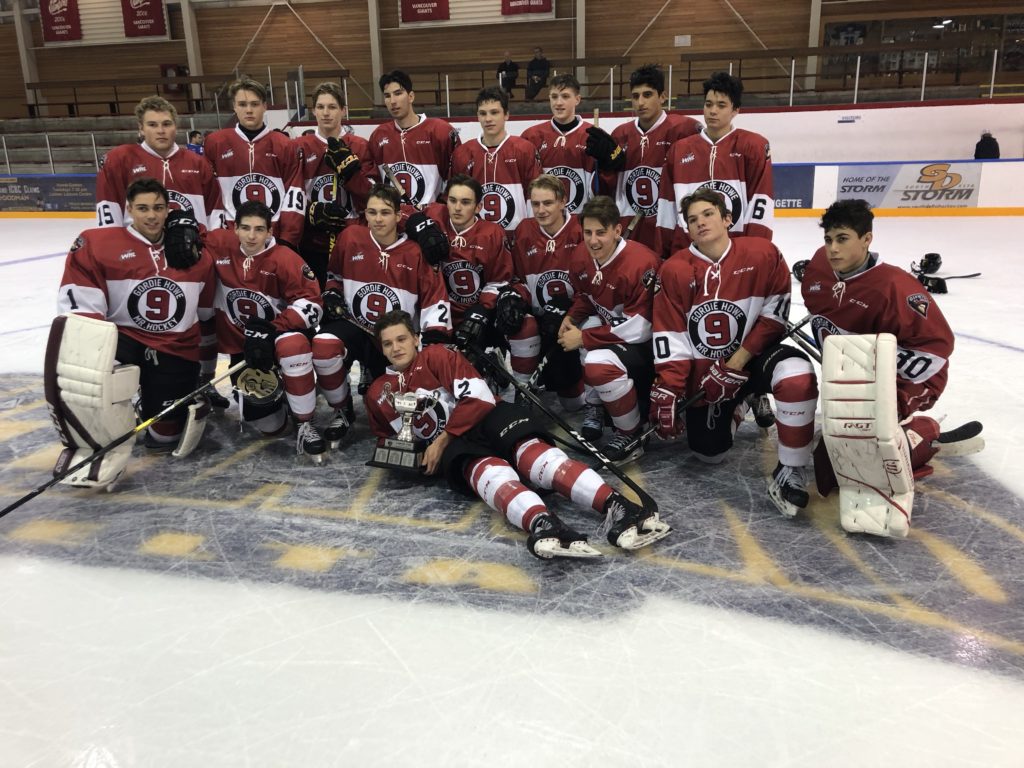 For a third straight season, Cyle McNabb will have his name etched on the Legends Cup Trophy. Sunday morning in Ladner Team Howe skated to a 4-3 regulation victory over Team Quinn in the annual Legends Cup Game. McNabb paced the Team Howe attack with three goals, two of which came 26 seconds apart in the third period breaking open a 2-2 tie.  Evan Patrician had the other tally for Team Howe while Tyler Ho, Zack Ostapchuk and Aidan Barfoot responded for Team Quinn.   Final shots favored Team Quinn by a 40-27 margin.

Both teams struck once in the opening period. Sophomore forward Aidan Barfoot put Team Quinn on the board first at 7:25 of the first period. Joel Sexsmith and Matthew Peterson both registered helpers. Late in the frame Team Howe responded with a marker from Evan Patrician. Starting goaltenders Braedy Euerby (Howe) and Drew Sim (Quinn) were sharp for their respective teams. Shots after one period were 12-7 for Quinn.

2:51 into the middle frame, Cyle McNabb netted his first of three on the day with an unassisted effort to move Team Howe ahead 2-1.

Mid-way through the period both teams switched goaltenders. Braedy Euerby finished with 16 saves for Team Howe and gave way to Jake Kovinsky for the final half. Drew Sim left the Quinn net with 13 saves to his credit before giving way to Jack Ford.

Team Quinn got back even shortly after the goaltending change when 2018 first-round pick Zack Ostapchuk pounced on a Krz Plummer rebound and shovelled it home. Brenden Pentecost had the second assist.

40 minutes through and the game was knotted 2-2 with Quinn outshooting Howe 25-19.

Neither team could solve the other one through the first 14 minutes of the third period. Both teams displayed an aggressive, tight-checking approach and overtime seemed imminent.

A late goal from Kyle Bochek at 16:29 moved Quinn back within one, but that’s as close as they’d come. Despite being outshot 40-27, Team Howe held on to earn the 4-3 victory. They did so without the benefit of a single power play. Team Quinn went zero-for-four on their power play chances.

Once the game ended, Giants GM Barclay Parneta presented the Legends Cup trophy to Cyle McNabb. The 2018 Legends Cup participants gathered at center ice for a group photo before leaving the ice.

Up next for the Giants: A week of preparation ahead of their preseason opener which goes Friday, August 31st at 11:30 AM against the Seattle Thunderbirds. That game marks the first of three straight games the Giants will play in Everett, WA.