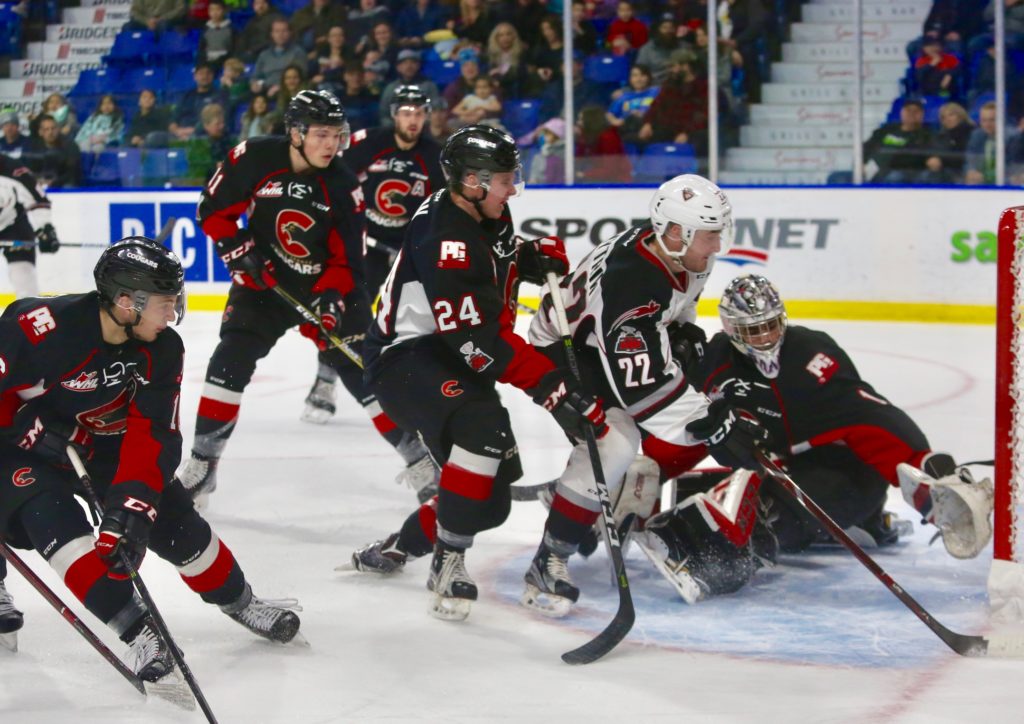 The Vancouver Giants are one point shy of second place in the B.C. Division thanks to some overtime heroics on Monday afternoon at the Langley Events Centre. James Malm helped the Giants earn their 20th victory when he snapped home his 15th of the season two minutes into overtime. Jared Dmytriw chimed in with two goals and two assists for the G-Men and Brayden Watts added a goal and an assist. Between the pipes Todd Scott stopped 12 of the `13 shots he faced in relief, earning his seventh win in the process. Dennis Cholowski responded with two goals for Prince George.

Not unlike their previous meeting two days ago, the Prince George Cougars jumped out to an early multi-goal lead thanks to two strikes 14 seconds apart. Dennis Cholowski bagged his first of two on the night on a wrap-around at 6:19, then 14 seconds later Kody McDonald snapped his 19th past Giants starter David Tendeck.

Jason McKee pulled David Tendeck after the 2-0 goal in favor of rookie Todd Scott. The move seemed to rejuvenate the Giants who responded with two goals of their own before the end of the period. The first one came via Brayden Watts at 8:21 who beat Cougars starter Tavin Grant with a high shot from the left circle on a power play. Jared Dmytriw then tied the game for Vancouver at 13:26 when he snuck past two Cougar defenders and stuffed home a forehand deke for his first of two goals on the night. Shots were 14-9 favoring the Giants after one period and the score was tied 2-2.

Vancouver outshot Prince George 13-3 in the second period, and controlled much of the period territorially. It took the Cougars the better part of 11 full minutes to register a shot. The Giants to their credit made good on one of their chances off the rush at 9:05. The trio of Owen Hardy, Brayden Watts and Jared Dmytriw combined on Dmytriw’s second of the game and 10th of the season off a point-blank chance from the slot. Period two ended with the G-Men ahead by a goal and outshooting Prince George 27-12.

Cougars captain Dennis Cholowski had some theatrics up his sleeve though in the third period of Monday’s game. At 12:44 of the final period, Cholowski snuck past a Giants defenceman and tipped home a pass from Jackson Leppard underneath Todd Scott and home for his 12th of the season and second of the night. Cholowski now has five goals and five assists for 10 points in six meetings against Vancouver.

The two teams traded good chances in the final minutes, but both Todd Scott and Tavin Grant held their ground and for a second straight meeting between the two sides, overtime would be required.

Two nights ago the Cougars were on the winning side of things in overtime, but that would not be the case on Monday in Langley. James Malm helped the Giants match their victory total from last season when he skated down the left-wing, toe-dragged to the middle and ripped home a shot past Tavin Grant to send the LEC crowd into a frenzy. For Malm it was his team-leading seventh game-winning goal. Malm’s goal was assisted by Jared Dmytriw who finished tops among all skaters with four points on the game.

The final shots were 38-19 for the Giants who went one-for-five on the power play and two-for-two killing penalties.

With the victory and some help from the Kamloops Blazers, the Giants (20-14-3-2) now sit just one point back of the Victoria Royals for second place in the B.C. Division standings.

Up next for Vancouver: A five-game, 10-day road trip beginning Wednesday in Edmonton against the Oil Kings.

– The Giants are a perfect 14-0 in games when they lead after two periods.

– The Giants are now 3-2-1-0 in their season series with Prince George.

– Monday’s four-point outing from Jared Dmytriw was the first of his WHL career.