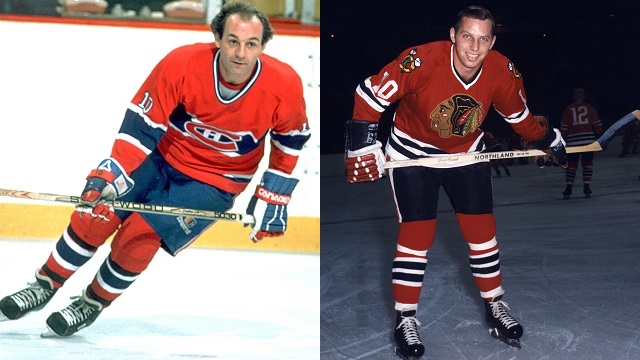 The Vancouver Giants, in partnership with the Scotiabank Hockey for Alzheimer’s Tournament, announced on Thursday that Guy Lafleur and Dennis Hull will be at the Pacific Coliseum for White Spot Legends Night presented by The Hockey Shop on November 14th when the G-Men host the Portland Winterhawks. 100 lucky fans in attendance at the game will have a chance to meet either Guy or Dennis!

“Our involvement with the Scotiabank Hockey for Alzheimer’s tournament started because of our relationship with Gordie Howe, and the efforts of the Gordie and Colleen Howe Foundation to raise money for dementia research,” said Giants Vice President, Business Development Dale Saip. “We are honoured as an organization to participate with hockey legends like Dennis and Guy in their support of this worthwhile cause.”

Lafleur tallied 1,353 points in 1,127 NHL games over his 17 year career with the Montreal Canadiens, New York Rangers and Quebec Nordiques. “The Flower” won five Stanley Cups, three Art Ross Trophies, two Hart Trophies, one Conn Smythe Trophy and was inducted into the Hockey Hall of Fame in 1988. Lafleur is also the Canadiens’ all-time leading scorer with 1,246 points in a Habs uniform.

Hull played 14 seasons in the NHL — 13 with the Chicago Blackhawks and one with the Detroit Red Wings. He was a five time NHL All-Star and tallied 654 points in 959 career games. “The Silver Jet” also spent eight seasons playing alongside his older brother Bobby for the Blackhawks. Internationally, Hull represented Canada at the 1972 Summit Series.

The Scotiabank Hockey for Alzheimer’s tournament is a three-day co-ed event that gives players an exhilarating opportunity to play with and against NHL Alumni and enjoy all the camaraderie and excitement of a pro-am tournament, while raising funds that provide critical support to the Alzheimer Society of B.C. The Society delivers education programs and support services to help the more than 70,000 British Columbians who face dementia. The Society also supports research for a cure. This year’s event runs from November 13th-15th at Planet Ice in Delta.