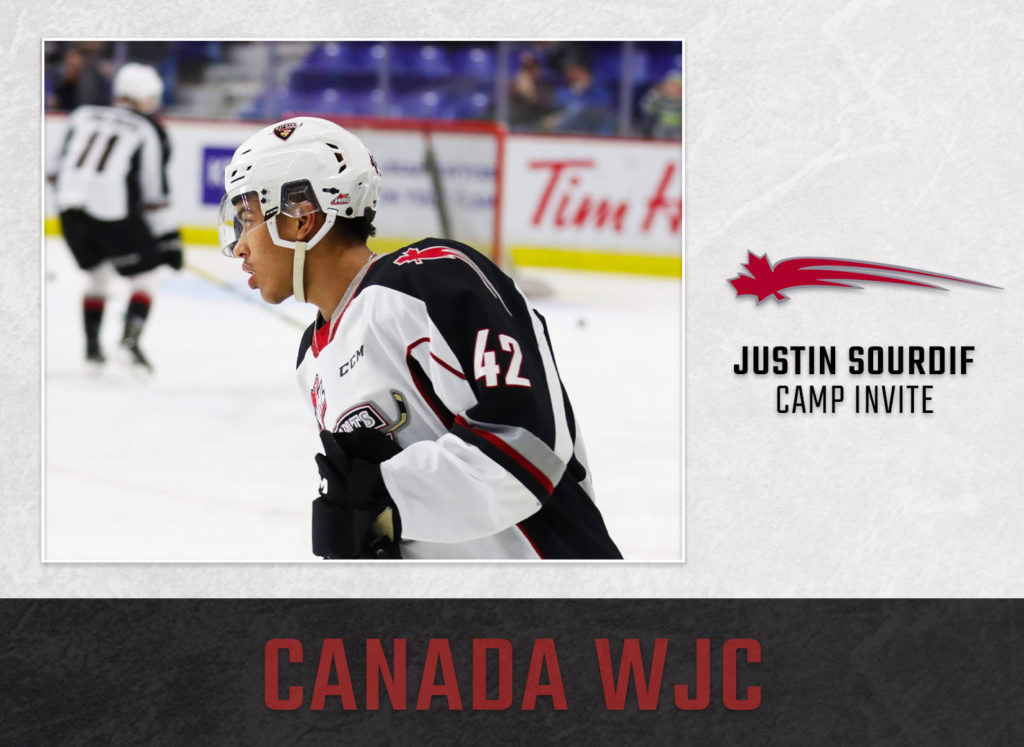 The Vancouver Giants in conjunction with Hockey Canada are thrilled to announce that 2002-born forward Justin Sourdif (Surrey, B.C.) was one of 51 players invited to attend Hockey Canada’s National Junior Team Summer Development Camp. The eight-day camp begins on July 28th and runs through August 4th.

SOURDIF TO JOIN MICHAEL DYCK AND MIKE BURNSTEIN IN CALGARY

Justin Sourdif just finished his third full season with the Vancouver Giants. The 2020 draftee of the Florida Panthers (Round 3, 87th Overall) led the Giants and the entire B.C. Division with 34 points (11G, 23A) and was named the B.C. Division’s Player of the Year. He added nine power play points (2G, 7A), two shorthanded goals and four insurance markers. Offensively he recorded at least one point in 17 of the team’s 22 games, and had 10 multi-point games. He also led all Giants forwards with a +10 rating. For his entire WHL career, he’s appeared in 147 regular season games and has notched 60 goals and 74 assists for 134 points, along with a +66 rating. He’s added two goals and six assists for eight points in 24 playoff games.

Internationally Sourdif is no stranger to representing Canada, having earned a Silver Medal during the 2019 Hlinka Gretzky Cup. He was also an alternate captain with Team Canada Red at the 2018 World Under-17 Hockey Challenge.

“Justin is deserving of this honour and we are very excited that he’s earned this opportunity with Hockey Canada,” said Giants General Manager Barclay Parneta. “He was one of the top players in the entire WHL last season, and his leadership, skill, and consistency are all characteristics that will serve him well at this camp.”

Sourdif was among 19 players from the WHL invited to attend.

Five goaltenders, 16 defencemen and 30 forwards have earned invites to the eight-day camp, participating in a variety of on- and off-ice sessions. The camp will also feature combined practices and intrasquad games with players attending Canada’s National Men’s Summer Under-18 Team summer development camp on Aug. 2-3.

The roster includes five players who won a silver medal at the 2021 IIHF World Junior Championship (Byfield, Drysdale, Garand, Guhle, Perfetti). Of the 51 players invited, 28 were selected in the 2020 NHL Draft, 20 hope to have their names called this week at the 2021 draft and one is eligible in 2022.