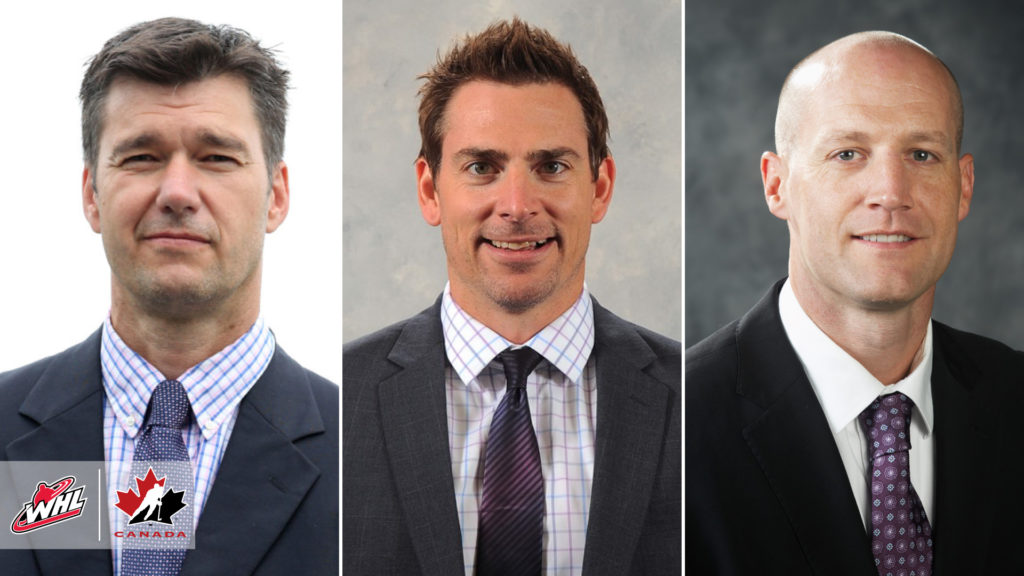 Calgary, Alta. — Three Western Hockey League coaches have been named to the coaching staffs of Hockey Canada’s 2019 World Under-17 Hockey Challenge which will take place in Medicine Hat, Alta. and Swift Current, Sask, in November.

“We are very excited for the group of coaches that has been selected,” said Shawn Bullock, Hockey Canada’s director of national men’s teams. “The coaches we’ve chosen have some incredible experience at all levels of the sport. The decision is never easy, but we’re confident that each of these coaches brings something different to the table, and we’re excited for them to guide the development of the top young players in Canada.”

Dyck recently completed his first season as the head coach of the Vancouver Giants, guiding his team to Game 7 of the 2019 Rogers WHL Championship Series. Prior to his work with the Giants, Dyck served as the head coach of the Lethbridge Hurricanes and was an assistant coach with the Hurricanes, Medicine Hat Tigers, Vancouver Giants and Kootenay ICE.

During the course of his WHL playing career, Dyck suited up in the WHL with the Calgary Wranglers, Brandon Wheat Kings and Regina Pats.

Dyck also coached the Lethbridge Hurricanes of the Alberta Midget Hockey League (AMHL) to a bronze medal at the 2018 TELUS Cup, Canada’s National Midget Championship. Additionally, Dyck served as the head coach of Team Pacific at the World Under-17 Hockey Challenge in 2010 and 2012, won a silver medal with Canada at the 2016 Winter Youth Olympic Games and coached Alberta to silver at the 2015 Canada Winter Games.

Marsh spent the 2018-19 season as an associate coach with the Saskatoon Blades after four years as an assistant with the Edmonton Oil Kings. As a WHL player, Marsh spent three seasons with the Tri-City Americans.

His coaching career has also included positions as an assistant coach with the University of Alberta of Canada West (CW), Spruce Grove Saints of the Alberta Junior Hockey League (AJHL), Northern Alberta Institute of Technology of the Alberta Colleges Athletic Conference (ACAC) and Fort Saskatchewan Traders (AJHL). Marsh, who was an assistant coach with Team Canada Red at the 2016 World Under-17 Hockey Challenge, won a pair of University Cup championships as a player with the University of Alberta in 1999 and 2000.

O’Rourke has been an associate coach with the Prince George Cougars for the past three seasons, prior to which he served as an assistant coach with the Red Deer Rebels. During his WHL playing career, O’Rourke skated with the Tri-City Americans and Moose Jaw Warriors.

Additional coaching experience for O’Rourke includes the head coach and general manager position of the Langley Rivermen of the B.C. Hockey League (BCHL), an assistant coach with the Abbotsford Heat of the American Hockey League (AHL) and the head coach of Team British Columbia at the 2019 Canada Winter Games.