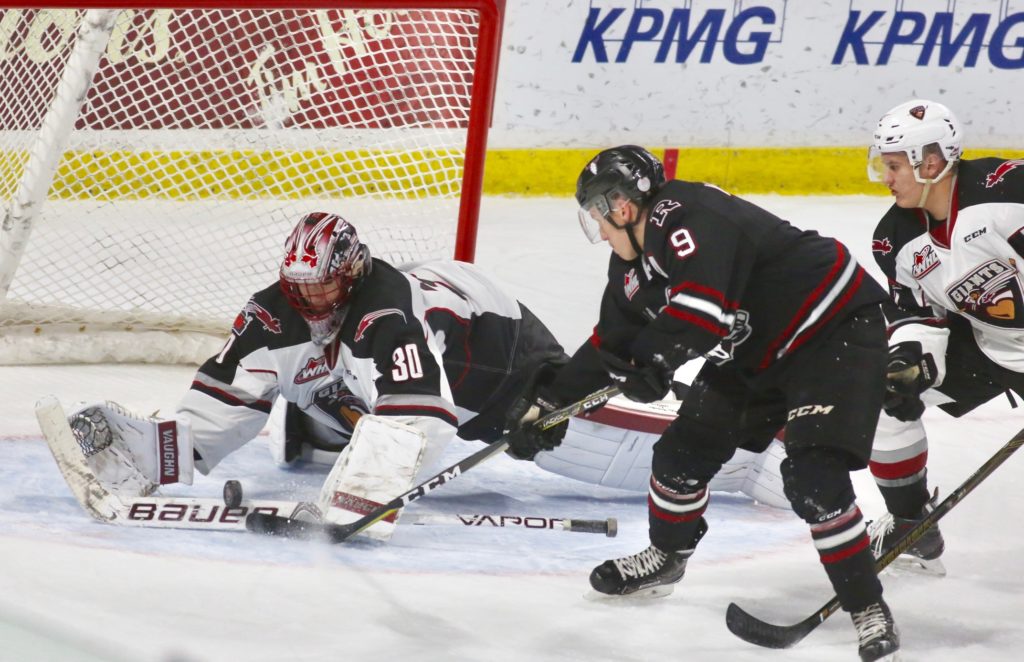 Sunday night at the Langley Events Centre, the Vancouver Giants (31-20-5-3) dropped a 4-2 decision to the Red Deer Rebels (21-26-10-3). Brandon Cutler and Kristian Reichel each scored twice for the Rebels while Dawson Holt and Jared Dmytriw countered with goals for Vancouver. In goal David Tendeck made 37 saves on 41 shots faced for the Giants while his counterpart Riley Lamb stopped 39 of Vancouver’s 41 shot attempts.

Brent Sutter’s Red Deer Rebels jumped out of the gates in period one, peppering the Giants net with an early onslaught of shots. At one point in the first the shots were 10-2 and David Tendeck was marvelous for the Giants keeping his team tied. Red Deer’s shot totals were aided by three straight power play chances, none of which were successful. In fact the Giants would end up capitalizing while shorthanded in the later stages of the first.

On an odd-man rush, Tyler Benson fed defenceman Brennan Riddle along the left-wing. Riddle raced wide on the defender before placing a perfect feed in front of the net to Dawson Holt. Holt’s initial shot was stopped by Lamb, but he won a race to his own rebound and tucked it home for his 11th. It was the fifth shorthanded goal of the season for Vancouver. Period one ended with the G-Men ahead 1-0 despite being outshot 15-9 and out power played 3-0.

Red Deer answered at 6:34 of the second off the rush when Kristian Reichel followed up a Brandon Hagel rebound and stuffed it home for his 26th. Then at 11:48, also off the rush, Brandon Cutler notched is first of two on the night when he one-timed home a left-wing feed from Arshdeep Bains.

Shots were 16-14 for Red Deer in the second, and the Giants certainly had their chances. But Riley Lamb did his part and didn’t allow the Giants to even up the score.

Early in the third at 3:49, Cutler struck again when he followed up a Brandon Hagel rebound and scooped it up and over David Tendeck. Of Cutler’s five goals this season, three have come against the Vancouver Giants at the Langley Events Centre.

Former Red Deer Rebel Jared Dmytriw answered for his club with a goal at 5:19 off a shot from the right circle that snuck through Lamb, but that’s as close as the Giants would come to completing their comeback.

Kristian Reichel put the game firmly out of reach for good at 11:35 when he one-timed home a pass from Cutler in close on David Tendeck to make the score 4-2.

A late surge proved unsuccessful for the Giants who finished tied 41-41 in shots with the visiting Rebels who have now won four straight and are 8-1-1-0 in their last 10. The victory pushed them two points clear of Kootenay for the third placed playoff spot in the Central Division standings.

The Giants finish their week 2-2, and will head into next week five points back of second and 13 points ahead for third in the B.C. Division standings.

Next up for the G-Men – A home matchup Friday night with the Everett Silvertips at 7:30 PM.

– 20-year-old defenceman Darian Skeoch returned to the Giants lineup for the first time since February 3rd. He finished the game with a +1 rating and two shots on goal.

– Fellow 20-year-old defenceman Brennan Riddle was named third star of the game after he finished with an assist, a +1 and two penalty minutes.

– The Giants loss to Red Deer marks just the second time in 12 games this season that the Giants have lost to a Central Division opponent.