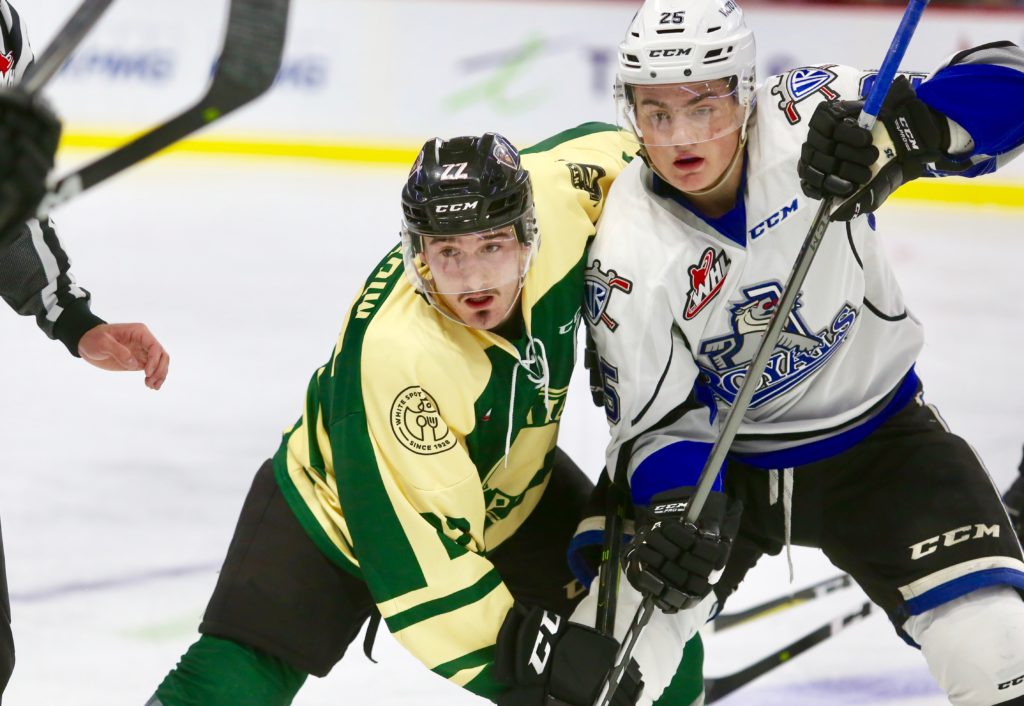 Sunday night at the Langley Events Centre the Vancouver Giants (14-6-2-0) dropped a 3-1 decision to the Victoria Royals (12-6-0-0). Dylan Plouffe provided the Giants with their lone goal early in the first period while the Royals answered with two first period strikes of their own via Logan Doust and D-Jay Jerome. The Royals would add a shorthanded empty-netter in the final period from Dino Kambeitz. Griffen Outhouse stopped 28 shots fired his way for the Royals to earn first star honours while Trent Miner was solid making 22 saves at the other end for the Giants.

Dylan Plouffe notched the Giants lone goal of the game at 5:03 of the first period. Griffen Outhouse made a terrific save off Tristen Nielsen’s initial attempt, but the puck was freed to Plouffe at the point, and he made no mistake off a shot through traffic. At 7:43 of the period, Logan Doust answered with his first career WHL goal which came off a slick feed from Phillip Schultz. Then veteran forward D-Jay Jerome gave the Royals the lead at 13:12 when he snuck his 11th by Trent Miner. Shots were 14-10 Giants but the score was 2-1 Royals after one.

The Giants outshot the Royals 8-6 in the middle period, but neither Griffen Outhouse or Trent Miner gave an inch. Miner did some of his best work in the second period making a number of tough saves, including a point-blank stop on Royals leading scorer Kaid Oliver late in the frame to keep the Giants within striking distance. Outhouse to his credit made a gorgeous glove save off Dawson Holt to keep his team in front.

Royals netminder Griffen Outhouse may have only made seven third period saves, but at least half of them were of the ‘A’ grade variety. He got some help from his goal post in the later stages of the period as Lukas Svejkovsky’s one-timed shot found iron and kept Victoria ahead. The Giants drew some late penalties and had a five-on-three power play chance with a minute and six seconds remaining. But Griffen Outhouse stood his ground and made the saves he had to make and then Dino Kambeitz added some empty net insurance for the Royals at 19:47 to seal the 3-1 deal for the Victoria Royals in Langley.

Trent Miner – 22 saves on 24 shots faced for the Giants

Griffen Outhouse – 28 saves on 29 shots faced for the Royals

Vancouver Giants: 0/4 on the power play

Victoria Royals: 0/3 on the power play

Next Giants Game: Wednesday night in Seattle at 7:05 PM.