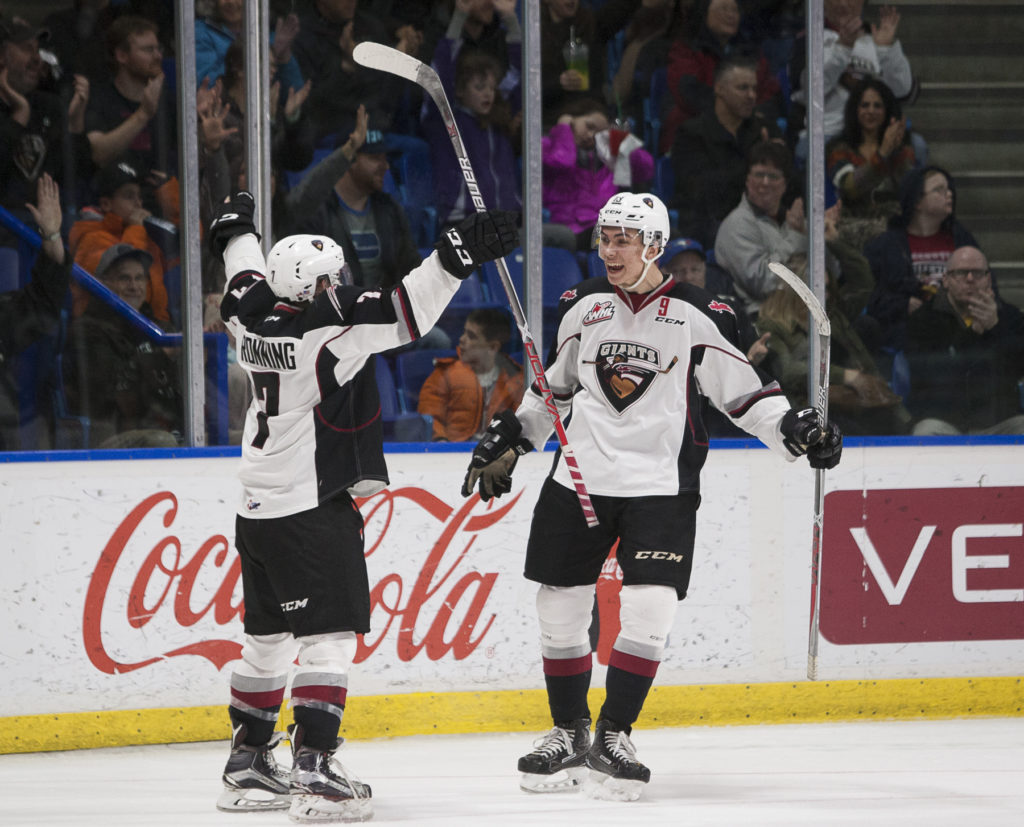 Fact: A 1700 kilometre-plus drive home from the Prairies is a lot more fun with a victory in your back pocket. Saturday night in Regina, SK the Vancouver Giants (5-5-1-1) defeated the 2018 Memorial Cup hosts, the Regina Pats (7-5-1-0) 5-2. Ty Ronning had a goal and two assists for Vancouver while three other Giants (Brad Morrison, Brendan Semchuk, and Dawson Holt) recorded multi-point games. Todd Scott was solid in goal making 33 saves and the Giants posted a season-high 50 shots on goal to improve their season record to 5-5-1-1 and their road trip record to 3-2-1-1.

For a fifth straight game the Giants struck first. James Malm snapped his third of the season past Pats starter Max Paddock at 2:35 from the slot. Brendan Semchuk and Dylan Plouffe added helpers.

Later in the first at 15:07, Brendan Semchuk knocked home a Brad Morrison rebound to make it 2-0 for the Giants. With that assist, Morrison reached the 200-point mark for his WHL career. He’d add another assist in the third period.

The Giants kept the pedal down in the second period by peppering the Regina goal with 19 shots. Max Paddock held his own for the Pats, making some key saves and Todd Scott matched that effort at the other side. Scott’s best save of the period was with the glove and it came off Wyatt Sloboshan’s shot off a two-on-one rush.

With time winding down in the second the Pats would eventually solve Scott when the WHL’s leading rookie scorer Emil Oksanen turned at the top of the right circle and fired a low shot that made its way through Scott and in for his 10th of the season. Oksanen’s goal came at 15:28.

Through 40 minutes Vancouver maintained the 2-1 lead and held a 31-28 edge in shots on goal.

Early in the third at 2:29, the Giants gained their two-goal cushion back when rookie defenceman Bowen Byram blasted home his first ever Western Hockey League goal from the top of the left circle on the power play. Vancouver’s power play would finish the night one-for-four while the penalty kill went three-for-three.

Milos Roman then further extended the Giants lead when he ripped his fourth of the season past Paddock from the slot at 7:09. His linemates Ty Ronning and Brad Morrison assisted.

The two teams would trade shorthanded goals in the later stages of the game to round out the game’s scoring. Braydon Buziak struck for Regina on a shorthanded breakaway at 11:47, but Ty Ronning answered with a shorthanded empty-net goal at 17:58 to solidify the Giants victory.

The final shots were 50-35 for the Giants who finished off their seven-game road trip with a record of 3-2-1-1. They earned at least a point in five of the seven games on the trip and remain tied with the Kelowna Rockets for the second-best record in the B.C. Division, one point ahead of the Prince George Cougars who are coming to the Langley Events Centre to face the Giants on Friday, October 27th at 7:30 PM.