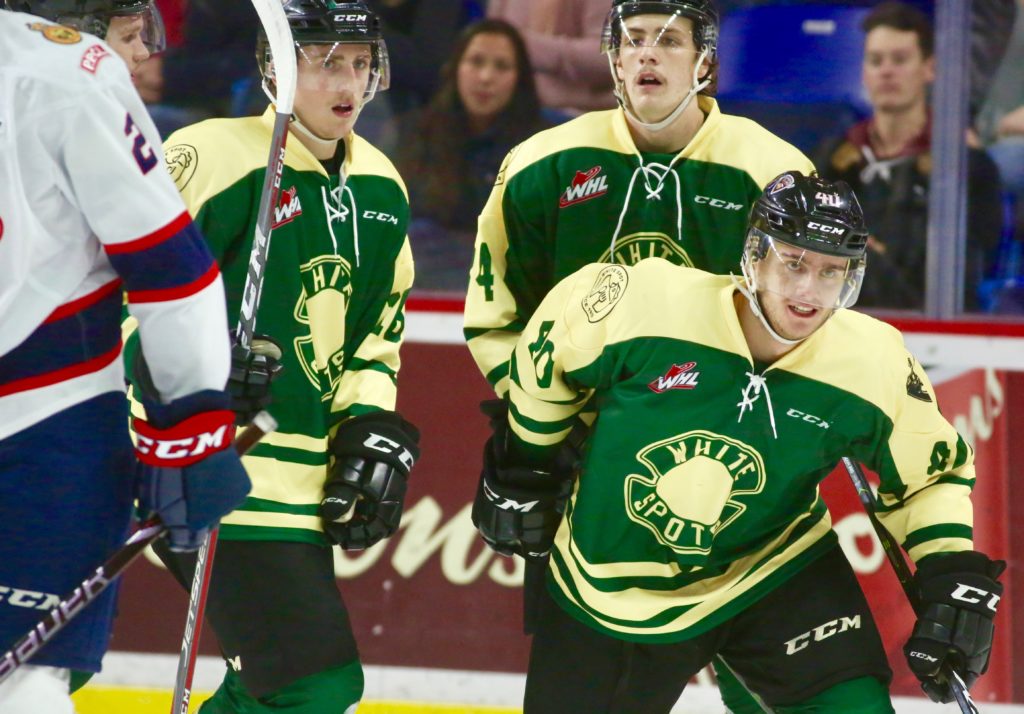 The Vancouver Giants (14-4-2-0) wrapped up their eight-game home stand in convincing fashion Friday night with a 10-goal outburst. Milos Roman, Tristen Nielsen and Yannik Valenti each scored twice and nine Giants recorded a multi-point game in a 10-4 victory over the visiting Regina Pats. Nick Henry responded with three goals and an assist for the Pats (7-14-0-0). The win vaulted the Giants back into a first-place tie for first in the Western Conference with Everett, and moved them nine points ahead of the Prince George Cougars for first place in the B.C. Division.

The Giants rushed out of the gate with four unanswered goals. Rookie Justin Sourdif (5) opened the scoring 54 seconds into the game, and exactly two minutes later Bowen Byram (6) snuck a back-hand shot through Pats starter Max Paddock on a power play. Jared Dmytriw (3) extended Vancouver’s lead at 9:17 with his third of the season, and then Dawson Holt (3) beat Paddock off a two-on-one rush off a shot from the left-wing circle. The Pats then pulled Max Paddock out of their net in favor of Dean McNabb. Nick Henry (9) answered with his first of three on the night at 16:57. Shots were 19-10 for the Giants after one.

Nick Henry scored shorthanded for the Pats at 4:56 of the period to move the Pats deficit to two goals. But 26 seconds later Milos Roman (9) scored on that same Giants power play to extend their lead to 5-2. Roman wasn’t done. He added a shorthanded marker on a breakaway at 13:01 to make the score 6-2. Shots in the middle frame were 17-8 for the Giants.

The Giants attack kept coming in the third. Tristen Nielsen (1) potted his first goal in a Giants uniform at 2:25, and Yannik Valenti (3) beat Dean McNabb with a shot off the rush from the left circle to make it an 8-2 game. Jake Leschyshyn scored his team-leading 14th of the season for Regina on a power play at the six-minute mark but Yannik Valenti (4) responded at 10:43 to move the Giants lead to 9-3. Nick Henry completed his hat-trick for Regina at the 11:41 mark off a two-on-one rush with Jake Leschyshyn but under two minutes later Tristen Nielsen (2) answered with his second of the game to give the Giants their 10th goal of the game and the 10-4 lead.

Next Game for the Giants: A road matchup with the Everett Silvertips tomorrow at 7:05 PM.