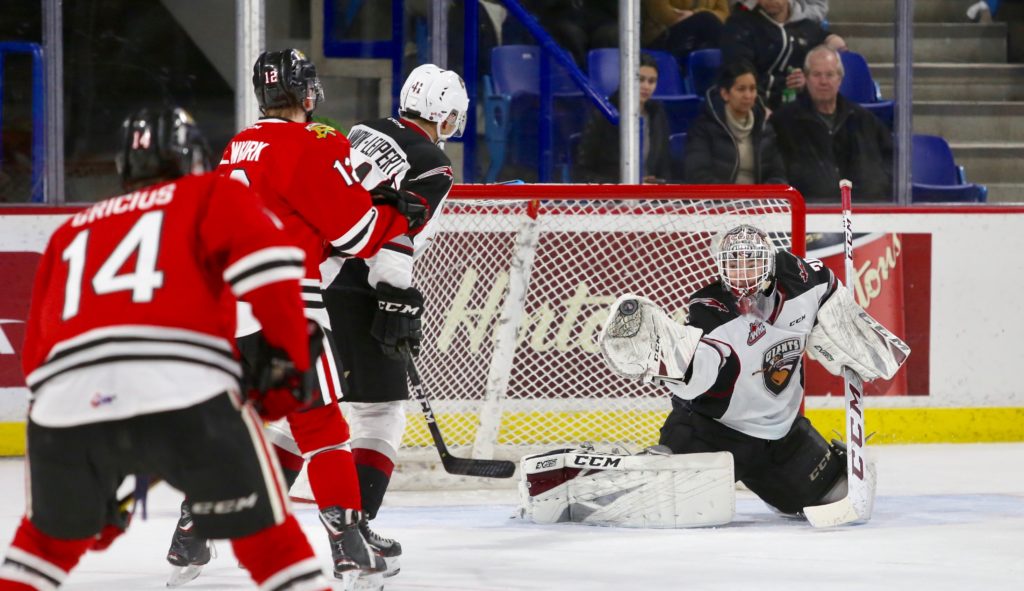 Monday afternoon at the LEC the Vancouver Giants (39-14-2-1) dropped a 5-3 decision to the Portland Winterhawks (36-16-3-3), ending their seven-game winning streak. Joachim Blichfeld led the Winterhawks attack with three goals and an assist, becoming the first WHL player to reach both 50 goals and 100 points. Justin Sourdif had a goal and two assists in response for the Giants who fell for just the second time in regulation over the course of a 19-game span.

POR – 12:05 into the first period the Winterhawks made it 1-0 on a power play when Joachim Blichfeld (49) one-timed a feed from Josh Paterson past the glove of Giants starter David Tendeck.

POR – Blichfeld struck again off the rush at 14:54. He skated into the right-wing circle, took a pass from John Ludvig and then snapped home his 50th goal of the season, extending Portland’s lead to 2-0.

POR – Exactly one minute into the second period Blichfeld completed his natural hat-trick when he wired home his 51st goal of the season from the high slot. Josh Paterson earned the lone helper on the 3-0 marker for Portland.

VAN – Dallas Hines (7) answered for the Giants at 7:37 when his one-timer from the slot beat Portland starter Shane Farkas. Justin Sourdif and Jared Dmytriw earned assists on the opening goal of the game for the G-Men.

POR – Seth Jarvis (15) restored the three-goal lead for Portland just 2:23 into the third period on a power play. Joachim Blichfeld set him up while Jake Gricius also earned an assist.

POR – Reece Newkirk notched the final goal of the game for Portland at 6:09. His 21st of the season was assisted by both Seth Jarvis and Nick Cicek.

VAN – The final goal of the game came at 18:44 off the stick of Giants leading scorer Davis Koch (23). Koch’s shot from the left-wing circle snuck through Shane Farkas on a late power play. Bowen Byram and Justin Sourdif assisted.

Portland: 2/5 on the Power Play

Vancouver:1/4 on the Power Play

Next Giants Game: Friday night at home against the Victoria Royals at 7:30 PM.