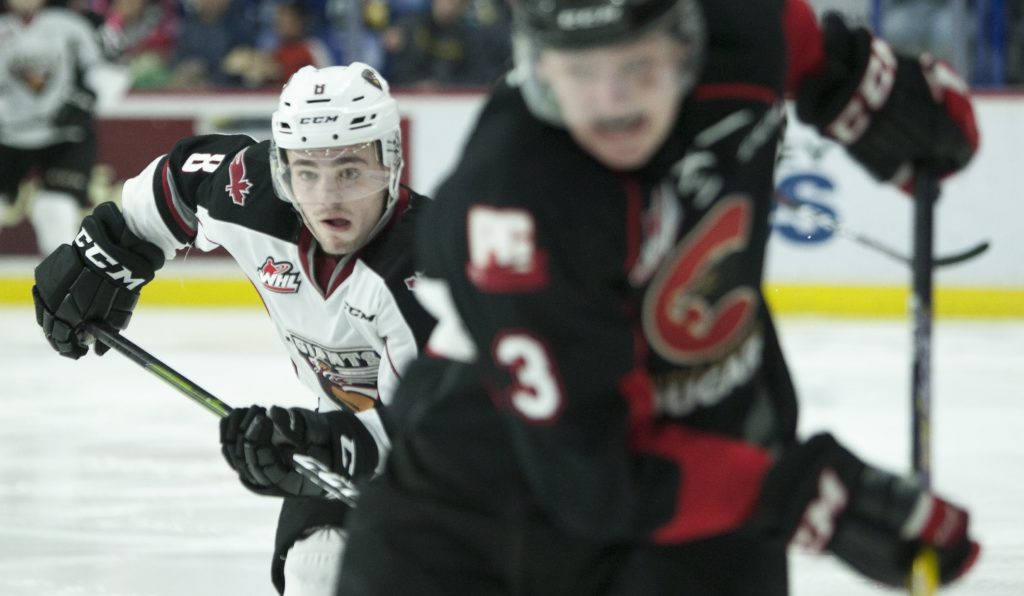 Tonight at the LEC the Vancouver Giants battle their B.C. Division rivals, the Prince George Cougars for the first time in the preseason. The Giants are coming off their third consecutive victory (3-2 last night over Victoria) while the Cougars are looking to avenge a 7-1 setback yesterday against Kamloops. The Giants will face the Prince George Cougars in 13 days up North to kick off their regular season, so today’s game should give both sides a decent glimpse of what is to come.

Up front the Cougars will lean heavily on 1999-born forward Josh Maser. Maser has registered 58 goals over the course of his past two seasons, including 30 a season ago. Fellow veterans Jackson Leppard, Ilijah Colina and Tyson Upper provide strong depth. Defensively Chicago Blackhawks prospect Cole Moberg will anchor a blueline that also includes returnees Ryan Schoettler, Rhett Rhinehart and Jack Sander. Between the pipes, Taylor Gauthier is the favourite to resume number one goaltending duties.

2003-born forward Craig Armstrong was selected ninth overall in 2018, and will likely play all season with Prince George. 2001-born forward Filip Koffer was selected 10th overall out of the Czech Republic in the 2019 CHL Import Draft and should make a strong offensive impact. Joe Kennedy is a 2001-born defenceman that will be interesting to watch. In goal Tyler Brennan hopes to crack the roster at age 16. He was the first goalie selected in the 2018 WHL Bantam Draft.

2000-born forward Tristen Nielsen scored all three goals last night for the Giants in their 3-2 win against Victoria. Nielsen leads all Giants so far in preseason scoring with five points. After back-to-back 35-point seasons, Nielsen appears poised to obliterate those totals in 2019-20.

2002-born goaltender Braedy Euerby made a strong first impression last night between the pipes. He faced 27 shots and stopped 25 of them. Early in the game, Euerby was tested as the Giants had to kill off four penalties in the first period. For the duration of the game, Euerby was poised and confident. It’s a strong starting point for Euerby who’s hoping to crack the Giants roster full-time.

The Giants successfully killed seven of their eight penalties on Friday night, and also finished two-for-three on their own power plays. Discipline is always a key factor, and tonight they’ll look for fewer penalties but equal effectiveness as they take the ice against the Cougars.