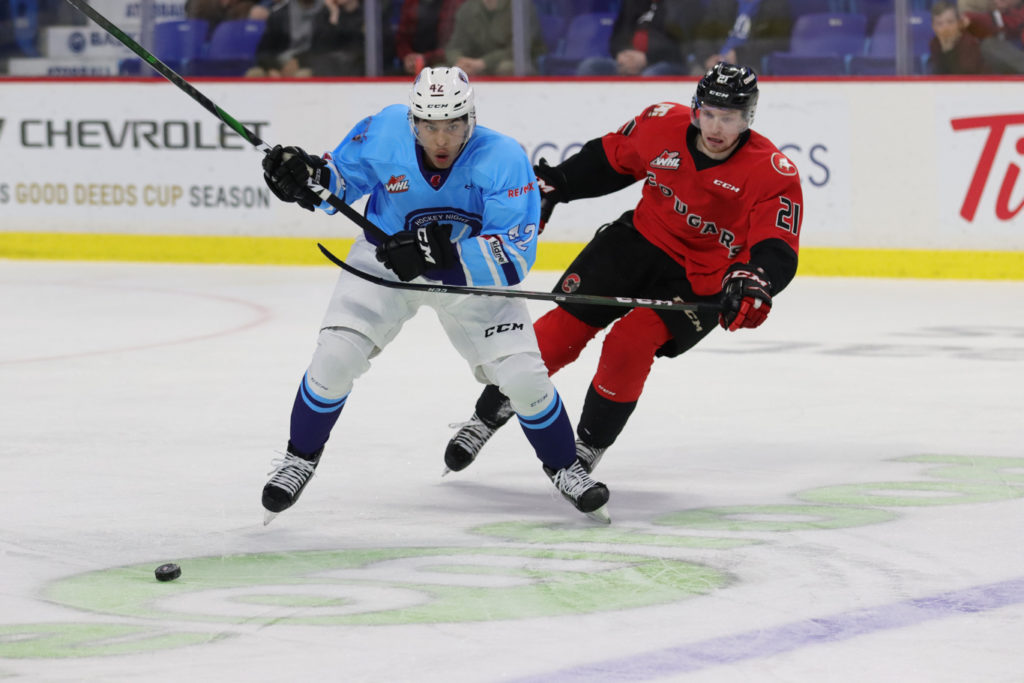 Saturday night at the Langley Events Centre the Vancouver Giants (24-20-3-2) skated to a 5-2 victory over the Prince George Cougars (16-27-3-4). Seth Bafaro had a goal and two assists for the Giants while Bowen Byram (2A) and Tyler Preziuso (1G, 1A) added multi-point games. Trent Miner stopped 27 in the Vancouver net to earn his 10th win of the season. Vladislav Mikhalchuk and Mitchell Kohner responded with goals for Prince George.

VAN – Holden Katzalay (4) opened the scoring for the Giants at 5:21, when he deflected Michal Kvasnica’s shot past Taylor Gauthier.

VAN – Tyler Preziuso arrived at the 20-goal mark for the second straight season at 12:42. Preziuso took a pass from Eric Florchuk, powered his way to the slot from the left-wing and snapped his shot home.

PG – Mitchell Kohner (7) put the Cougars on the board at 15:36 on a breakaway. Jack Sander and Cole Moberg both earned assists.

VAN – Justin Sourdif (18) extended the Giants lead to 3-1 at 13:00 of the middle frame. Sourdif’s goal was set up by both Bowen Byram and Seth Bafaro.

PG – Vladislav Mikhalchuk (7) responded with a power play marker off a one-timer at 15:53. Ilijah Colina and Ryan Schoettler secured the assists.

VAN – Seth Bafaro (4) restored the two-goal cushion for the Giants at 9:48 off a shot from the right-wing point.

VAN – Milos Roman (17) then ended all hopes of a Cougar comeback at 12:53 on a power play one-timer off a feed from Bowen Byram. Tyler Preziuso added the second assist on the play.

Next Giants Game: Tomorrow at 4:00 PM against the Kamloops Blazers. Tickets are available HERE.

“Our third period was very good. We played the way we needed to play to close out the win.” – Giants head coach Michael Dyck.

“We feel really good for Trent Miner. We wanted to go back to him because it was important that he get his confidence back. Tonight was a really good game for him.” – Michael Dyck.