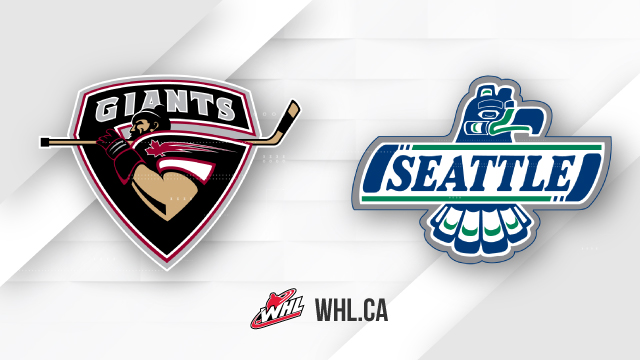 Friday afternoon in Everett, WA the Vancouver Giants kicked off their 2019 exhibition season with a 4-2 loss to the Seattle Thunderbirds. Seattle scored four unanswered goals beginning at the 15:12 mark of the second period. Giants goals came courtesy of Justin Sourdif and John Little. Little led all Giants scorers with a goal and an assist. Drew Sim played the whole game in net for the Giants, surrendering three goals on 21 shots faced.

VAN – Justin Sourdif wastes no time. At 4:25 he parked himself in front of the Seattle net and tipped home a low shot from John Little. Tristen Nielsen snagged the second assist. A power play goal.

VAN – At 13:32 John Little extended the Giants lead with a strong individual effort. He stole the puck from a Seattle defenceman at their blueline, skated in alone and converted up high. His goal was unassisted.

SEA – Michael Horon put Seattle on the board at 15:12 on a power play. He sliced through a pair of defenders and then ripped his shot home from the slot. Tyrel Bauer and Conner Bruggen-Cate with assists.

SEA – One minute and 27 seconds later Seattle tied it when Jared Davidson snuck a shot past Drew Sim from the left-wing circle. His goal was unassisted.

SEA – 1:33 into the third, Lucas Ciona moved the T-Birds ahead with an unassisted goal. He raced wide down the left-wing, skated in close and tucked it past the stick of Drew Sim.

SEA – Brecon Wood iced the game for the T-Birds into an empty net with 14 seconds to go. The Giants applied decent pressure in the final 90 seconds with their net empty, but could not convert.

Seattle: 1/6 on the Power Play

Giants Next Game: Tomorrow vs. Portland at 11:30 AM from Everett, WA.