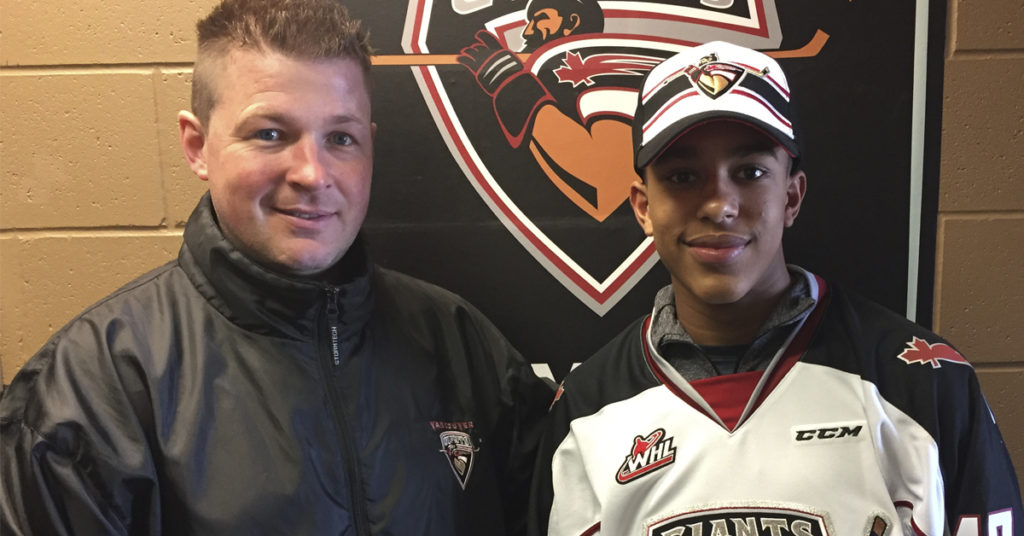 The Giants started out the day by selecting forward Justin Sourdif (pictured) with the third overall pick. The Surrey native played for the Delta Hockey Academy’s Bantam Prep team during the 2016/17 season. The 5’10”, 158lb forward amassed 32 goals and 34 assists in 29 regular season games and helped Delta to the CSSHL’s Bantam Prep Division championship game. Sourdif also took part in the 2017 U16 BC Cup in April, leading the tournament in scoring with five goals and four assists in four games while playing for the victorious Team White.

Vancouver made two selections in the second round, taking defenceman Tanner Brown at 24th overall and forward Cole Shepard at 33rd overall.

Shepard bagged 19 goals and 28 assists in 30 games with the Delta Hockey Academy’s Bantam Prep team during the 2016/17 season. The West Vancouver product was a teammate of Justin Sourdif who Vancouver chose in the first round. Shepard added a goal and two helpers in five playoff games. The 5’8″, 142lb winger scored one goal in four games for Team Blue at the 2017 U16 BC Cup.

The Giants had another two picks in the third round. Vancouver took forward Krz Plummer at 46th overall and forward John Little at 60th overall.

Plummer, who hails from Whitecourt, Alberta, scored eight goals and 13 assists in 27 games with the Pursuit of Excellence’s Bantam Prep team in the 2016/17 regular season. In the playoffs, Plummer tallied two goals and four assists in five games. The 6’0”, 195lb forward also played at the Alberta Cup last month where he scored four goals and one assist in five games for Team Northwest.

Little played for the Shawnigan Lake School Bantam Prep team in 2016/17. During the regular season, the Parksville native led his team in scoring with 13 goals and 14 assists in 27 games. Little, who is listed at 5’11”, 171 lbs, went on to net five goals and two assists in four post-season games. He also went to the 2017 U16 BC Cup, scoring one goal in four contests.

Vancouver didn’t have a pick in either the fourth or fifth round until General Manager Glen Hanlon made a trade to acquire the 103rd overall pick from the Moose Jaw Warriors in exchange for the 124th and 134th overall picks. With that pick, the G-Men selected goaltender Braedy Euerby.

Euerby is from Delta and played for the Delta Hockey Academy’s Varsity Green team in 2016/17. He went 11-0-0 in the regular season with a 0.45 goals against average and a sparkling 0.970 save percentage. The 6’0”, 170lb netminder also led his team to the Varsity championship, amassing a 4-0-0 record in the playoffs.

The Giants drafted defenceman Jacob Gendron in the sixth round at 126th overall.

Gendron, a 6’0”, 175lb rearguard, played for the Prince George Cougars Bantam Tier 1 team in 2016/17. The Prince George native helped his club to the BC Provincial Championships and scored one goal and one assist in five games at the tournament. Gendron also played at the 2017 U16 BC Cup, picking up one assist in four games for Team Yellow.

The G-Men didn’t pick again until the eighth round when they drafted forward Alec Saretzky.

The Giants then acquired the 178th overall pick from the Swift Current Broncos in exchange for a 2018 ninth round pick and selected forward Ryan Mulrenin.