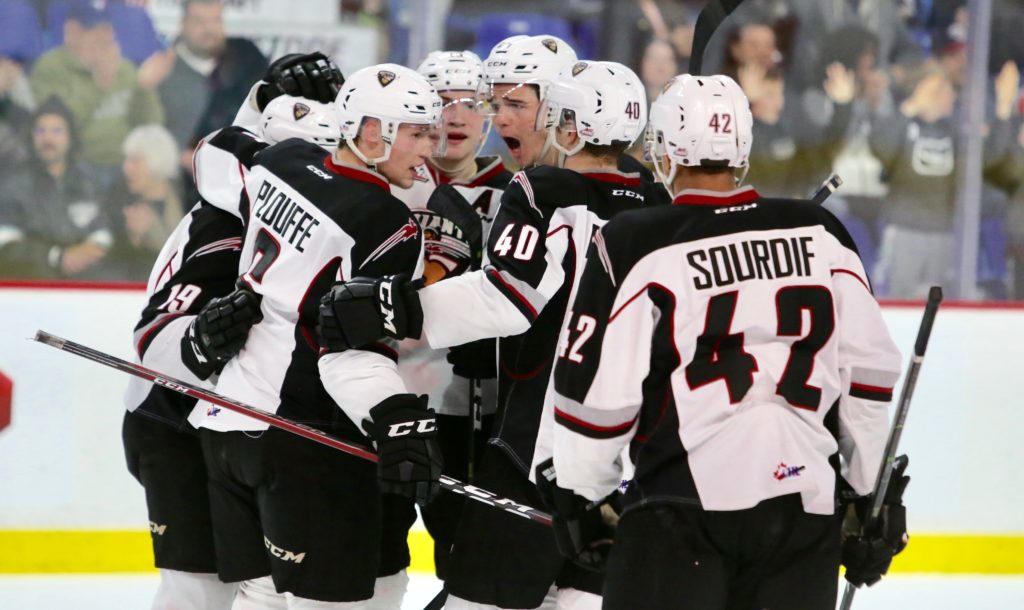 The Vancouver Giants have drawn first blood in their first-round playoff series with the Seattle Thunderbirds. Friday night at the Langley Events Centre in front of over 3500-strong the Giants downed the Seattle Thunderbirds 7-1. Dylan Plouffe paced the Giants with two goals and an assist while four other Giants recorded multi-point games. Six Giants altogether combined for the seven goals on 40 shots while Trent Miner was superb making 27 saves in net for the Giants. Andrej Kukuca had Seattle’s lone tally at 19:57 of the second period. The tandem of Roddy Ross and Cole Schwebius combined for 33 saves in the Seattle goal.

VAN – 1:20 into the second period Milos Roman put the Giants up 1-0 when he finished off a slick three-way passing play with Davis Koch and Jadon Joseph.

VAN – 23 seconds later Lukas Svejkovsky increased Vancouver’s lead to 2-0 when his low shot from the high slot slipped through traffic and past Roddy Ross.

VAN – Jadon Joseph sent the LEC into a frenzy at 6:47 when he stripped defenceman Jake Lee, skated in alone shorthanded and tucked home his first of the post-season to make it 3-0.

VAN – Dylan Plouffe’s first of two on the night came at 16:57 when he one-timed a feed from Dawson Holt from the left-wing point. Kaleb Bulych had the second assist on the play.

SEA – The Thunderbirds lone goal came with three second left in the second period. Andrej Kukuca skated into the slot and one-timed home a feed from Matthew Wedman that came from the right-wing.

VAN – Just 2:10 into the final period Dawson Holt extended Vancouver’s lead to 5-1 when he cut ot the front of the net and one-timed home a feed from Dallas Hines.

VAN – Then at 4:23 on a power play Dylan Plouffe roofed his second goal of the game from the right-wing circle to make it a 6-1 game. That spelled the end of the night for T-Birds starter Roddy Ross who was pulled for a second straight game against the Giants.

VAN – Bowen Byram rounded out the game’s scoring for the Giants at 6:41 off an odd-man rush. He cut into the slot and went upstairs over the glove of Cole Schwebius to give the Giants a 7-1 lead.

Vancouver: 2/7 on the power play

Seattle: 0/7 on the power play

Next Game: Tomorrow night at 7:00 PM against Seattle