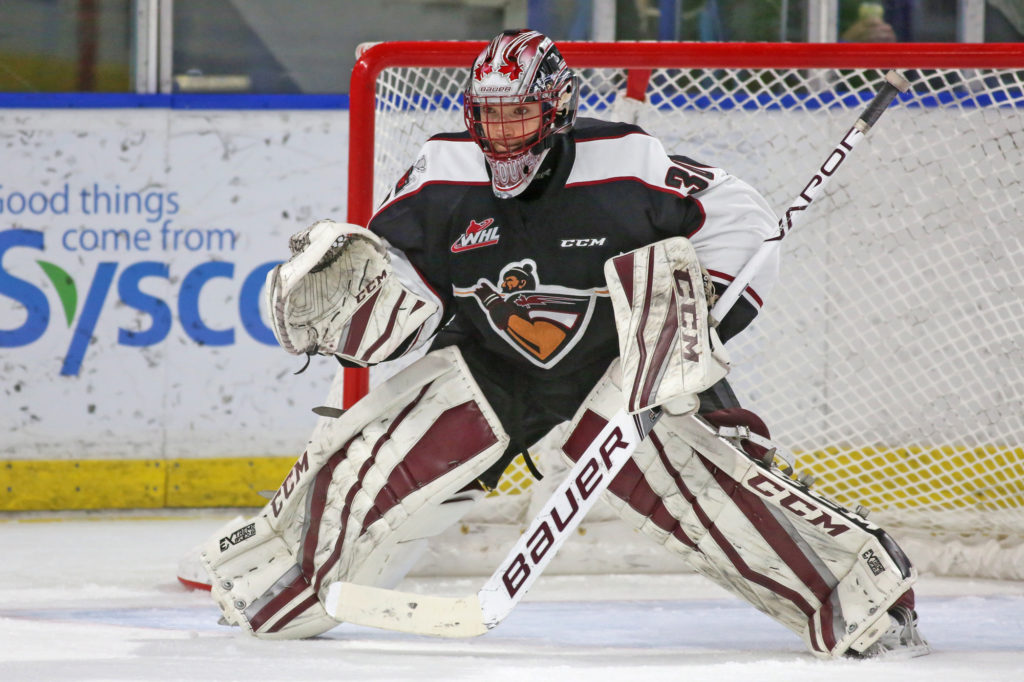 Wednesday night in Portland, OR the Vancouver Giants rallied from a 2-1 third period deficit to defeat the Portland Winterhawks 4-2. Ty Ronning’s 50th goal of the season tied the game, and his 51st gave the Giants the lead with less than three minutes to go. Brayden Watts and Dawson Holt added the other goals for the Giants who got A 47-save, first star performance from goaltender David Tendeck en route to their 30th victory of the season. Ryan Hughes and Reece Newkirk had the goals in response for Portland.

Dawson Holt staked the Giants to a 1-0 lead just a minute and 30 seconds in. Holt followed up a James Malm rebound and stuffed home his 10th of the season past Portland starter Cole Kehler. The 1-0 lead held up after one period for the Giants who were outshot 10-8.

Period two was a different story as the Winterhawks outshot the Giants 21-6, while converting on good two of those opportunities. Portland tied the game at 2:49 when rookie Reece Newkirk tucked his fifth of the season home off a Lukas MacKenzie rebound. Ryan Hughes then put Portland ahead at 17:02 on a power play when he shot from the top of the left circle made its way up and over the left shoulder of David Tendeck for his 12th. The score could have been much worse had it not been for the heroics of Tendeck, who’s best save of the period came off a shorthanded breakaway attempt from Alex Overhardt. Shots were 31-14 for Portland after two full periods.

Tendeck continued to keep his team within striking distance in the third as he thwarted off several good looks from the Winterhawks in the early stages of the third. Eventually Tendeck’s efforts would be rewarded with some offense at the other side courtesy of the Giants leading scorer.

Shortly past the mid-way point of the period, Ty Ronning became the first Vancouver Giant in the history of the franchise to score 50 goals in a season when he crashed the net, and redirected home a Tyler Popowich shot from the right circle.

Ronning wasn’t done. At 17:32 of the period, he wired a rebound past a sprawled Cole Kehler from the right-wing circle to complete the comeback, giving his team the 3-2 lead! He then assisted on Brayden Watts’ empty-netter at 19:30 a few minutes later to cement the victory for the visitors.

Final shots were 49-19 for Portland who went one-for-four on the power play. The Giants went zero-for-two on their power play chances.

With the win the G-Men improve their overall record to 30-18-5-3 and their road record to 13-9-3-2. They sit five points shy of both Kelowna and Victoria for first in the  B.C. Division and now sit 12 points up on Kamloops for third. The Winterhawks now sit at 35-19-1-3 and remain two points back of Everett for first in the US Division.

Up next for the Giants, a stretch of three games in three nights beginning Friday night at home against the Edmonton Oil Kings.

– With his 50th and 51st goals, Ty Ronning remains second in the WHL goal-scoring race, two back of Moose Jaw’s Jayden Halbgewachs and two ahead of Swift Current’s Glenn Gawdin.

– 2002-born defenceman Joel Sexsmith made his Giants debut. He finished the game with two penalty minutes and a -1 rating.