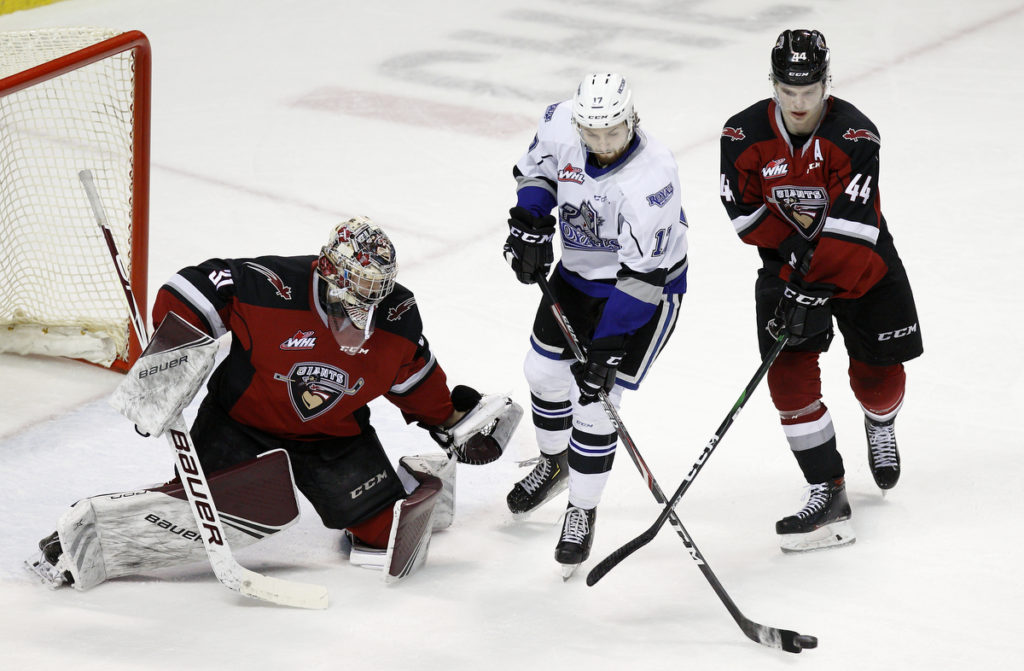 The Vancouver Giants (32-21-3-2) have now skated to five straight victories against their foes from Vancouver Island. Saturday night in Victoria the Giants downed the Victoria Royals (30-23-5-2) 6-2. Bowen Byram led the Giants with three assists while four other Giants recorded multi-point games. Trent Miner stopped 29 of Victoria’s 31 shots to secure his 14th win of the season. Phillip Schultz and Keanu Derungs responded with goals for the Royals. The win pushed the Giants two points ahead of the Victoria Royals for second in the B.C. Division standings with two games still in hand.

GIANTS ARE TWO FOR TWO SO FAR THIS WEEKEND

VAN – Holden Katzalay (6) got the offense started for the Giants off the rush at 5:10. He took a drop pass from Bowen Byram and snapped a shot home through traffic.

VAN – Eric Florchuk (21) made it 2-0 off a low shot from the right wing that snuck past the right pad of Royals starter Adam Evanoff. Florchuk’s goal was unassisted.

VAN – At 14:20 Tristen Nielsen (29) skated to the right side of the Victoria net and tapped home a cross-crease feed from Bowen Byram to make it 3-0 Vancouver. Justin Sourdif added the second assist.

VAN – Cole Shepard (11) made it a 4-0 lead for the Giants off a three-way passing sequence with Holden Katzalay and Michal Kvasnica. Shepard’s goal spelled the end of the night for Adam Evanoff in the Victoria net.

VIC – Royals captain Phillip Schultz (16) put Victoria on the board at 9;39 on an unassisted shorthanded breakaway to make it a 4-1.

VIC – With 3:07 left in the second period, Keanu Derungs made it 4-2 off an odd-man rush. Derungs’ 14th of the season was assisted by Brandon Cutler.

VAN – Michal Kvasnica (8) restored the three-goal lead for the Giants off a one-timer from the slot. Cole Shepard earned the lone assist.

VAN – Tyler Preziuso (24) made it 6-2 on a power play late in the third period off a shot from the left-wing in close beside the Victoria goal. Bowen Byram and Eric Florchuk both assisted.

Next Game: Tomorrow afternoon at 3:05 PM the Giants and Royals will square off for the 10th and final time during the regular season.