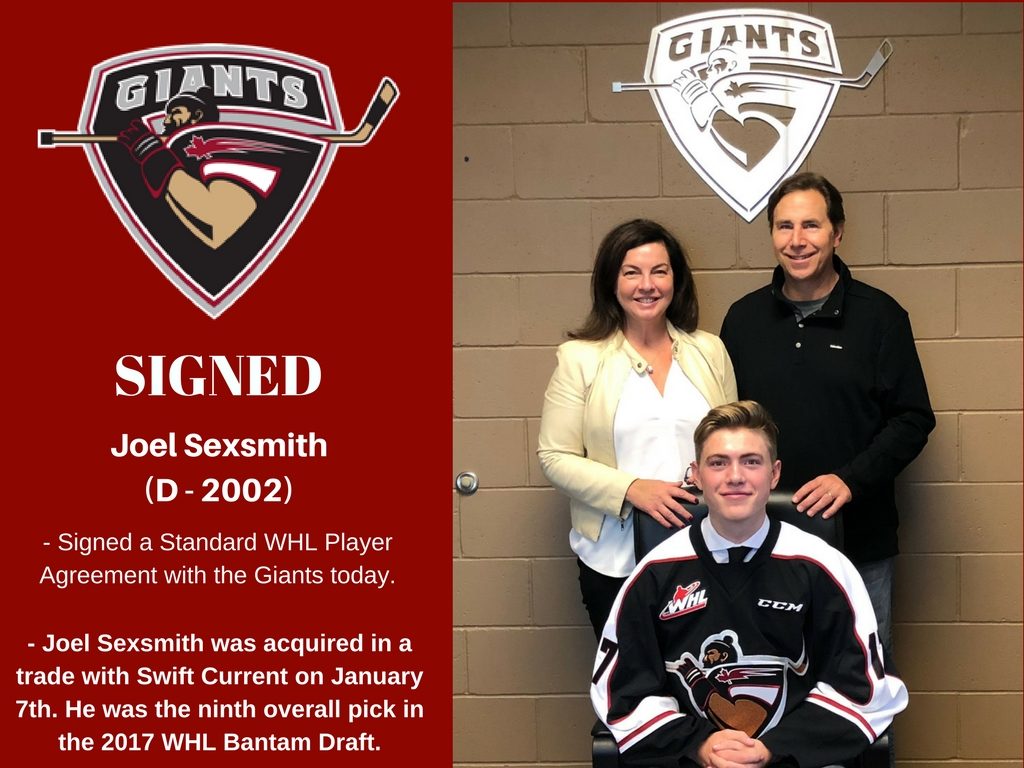 Originally selected ninth overall by the Swift Current Broncos in the 2017 WHL Bantam Draft, the 6’1”, 165-pound defenceman was acquired by the Giants in a trade on January 7th that sent a first-round pick in 2019 back to Swift Current.

In eight games with the Edge School Elite 15’s this season, Sexsmith has produced two goals and nine assists for 11 points. In October, he represented Team Alberta at the WHL Cup and finished with a goal, two assists, a +6 rating and a Silver Medal. During his second year of bantam, Sexsmith scored four goals while adding 12 assists for 16 points in 30 games with the Rink Hockey Academy Bantam Prep team.

“Today our franchise took another major step forward when we welcomed Joel and his family to the Vancouver Giants organization,” said Giants GM Glen Hanlon. “Joel is a very strong two-way defenceman who we expect to play a big part in our success in the years to come.”

Hanlon adds, “The addition of Joel Sexsmith now means that we have managed to draft or acquire six of our top 25 ranked players from the 2017 Draft. We believe very strongly in the direction we’re headed and we’re also very excited about what we’ve been able to achieve so far this season.”

It’s an honor for me to sign with the Vancouver Giants,” adds Joel Sexsmith who will join the team for practice today and tomorrow. “This is a great fit for my family and I and I’m very excited to begin the next chapter of my junior hockey career in Vancouver with the Giants.”

This weekend the G-Men (25-14-4-2) continue their eight-game home stand when they host the Victoria Royals on Friday (7:30 PM puck drop) and the Portland Winterhawks on Saturday (7:00 PM puck drop).