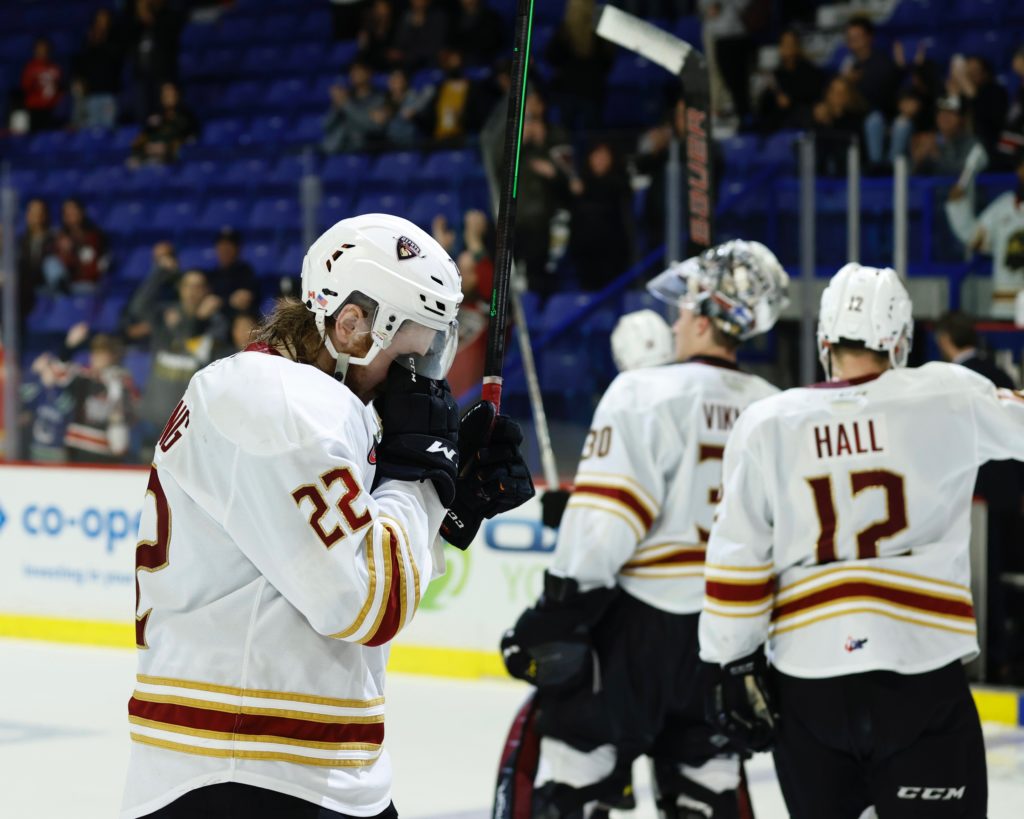 The Cinderella playoff run for the 2022 Vancouver Giants has come to an end. Sunday afternoon at the Langley Events Centre the Kamloops Blazers skated to a 6-0 shutout victory. Dylan Garand stopped all 24 shots he faced in the Kamloops net while Luke Toporowski paced the Blazers attack with two goals and one assist. Jesper Vikman made 30 saves in response for the Giants. With that result, a memorable 12-game, two-round playoff run for the eighth seeded Vancouver Giants has ended, and over-agers Alex Cotton, Connor Horning and Adam Hall have played their final games in the WHL.

BLAZERS TOP GIANTS AND ADVANCE TO ROUND 3

Alex Cotton – The Langley, B.C. product appeared in 200 career WHL regular games (Lethbridge/Vancouver) and an additional 19 in the playoffs. During the regular season Cotton produced 44 career goals along with 98 assists for 142 points. During the 2019-20 season Cotton led all WHL defencemen in scoring with 20 goals and 67 points. He was selected by the Detroit Red Wings in Round 5 of the 2020 NHL Draft. He was acquired by the Vancouver Giants in an early November trade with the Lethbridge Hurricanes. He finished the playoffs with six goals and 10 assists for 16 points in 12 games.

Adam Hall – The Edmonton, AB native wraps up a WHL career that spanned 122 games (Lethbridge/Vancouver). He was acquired by the Giants in a trade with Lethbridge in April, 2020 and notched seven goals and five assists with the Giants during the 2021 Bubble Season in Kamloops. This season, Adam Hall finished with 17 goals and 20 assists for 37 points in 60 regular season games, and he added 10 goals and five assists for 15 points in 12 playoff games. In Game 1 of Round 1, Adam Hall notched his first WHL hat-trick which included the OT winner in a 5-4 victory in Everett over the Silvertips.

Connor Horning – The product of Kelowna, B.C. led all active Vancouver Giants with 263 career WHL regular season games (Swift Current/Vancouver). After capturing a WHL championship with the Swift Current Broncos in 2018, Horning would eventually be dealt to the Giants in November, 2019. From there he would go on to appear in 145 regular season games with the Giants, spanning three seasons. This season he scored a season-high 10 goals and matched his previous season high with 31 points during the regular season and he added two goals and four assists for six points in 12 playoff games.