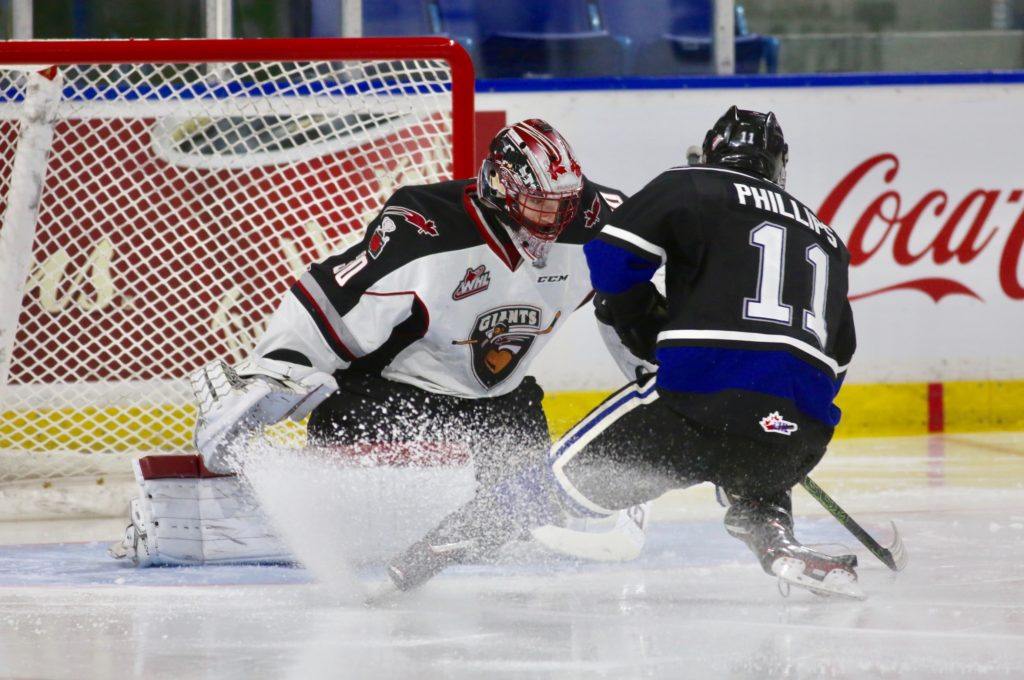 Tuesday night at the Langley Events Centre in front of 4683 strong the Vancouver Giants earned a 5-1 victory over the Victoria Royals in Game 3 of their first-round series. Milos Roman paced the Giants with a goal and two assists while Tyler Benson and Ty Ronning each added two points. David Tendeck returned to the Giants crease after missing the past five games and stopped 35 of the 36 Victoria shots fired his way to earn the win in goal. Noah Gregor had Victoria’s lone goal at 12:08 of the third period. Royals netminder Griffen Outhouse made 28 saves on the other side of the ice. The Giants now take a 2-1 series lead into Game 4 which goes Thursday, March 29th at 7:00 PM at the LEC.

6:32 into the first period, Vancouver took a 1-0 lead when Owen Hardy carried the puck from behind the Victoria net into the right-wing circle and snuck a low shot past Outhouse and home for his first goal of the playoffs. Hardy’s marker was assisted by Jared Dmytriw and Brennan Riddle.

David Tendeck showed no signs of rust for Vancouver as he turned aside all nine shots fired his way in the first period. His best save came off a 2-on-0 rush when he slid to his right and robbed Dante Hannoun with the glove.

Vancouver also caught a break at 13:52 of the first when the Victoria Royals had a goal called back. Matthew Phillips thought he had his first of the playoffs off the rush, but after review the referees decided that Phillips had directed the puck into the net with his left foot inside the crease, which resulted in no goal. Vancouver took a 1-0 lead into the first intermission.

Victoria outplayed the Giants for most of the second period. At one point the shots were 12-2 for the Royals, but they couldn’t solve David Tendeck. From the mid-way point of the period on though the Giants found their legs and it resulted in two power play chances – The latter of which resulted in a goal.

With under a minute remaining in the period, Giants captain Tyler Benson scored his first career WHL playoff goal off a shot through traffic from the right point to extend Vancouver’s lead to 2-0.

Before the second ended the Giants ran into some penalty trouble of their own when defenceman Matt Barberis was assessed a five-minute major penalty for cross-checking and a game misconduct. Shots were 26-19 for Victoria through two periods but Vancouver led by two.

Victoria was unable to capitalize on their five-minute power play to start the third and two minutes and 41 seconds later the Giants made it 3-0 when Milos Roman knocked home a Ty Ronning rebound for his team-leading third goal of the series.

Just over three minutes later off the rush, Bowen Byram made it 4-0 for the Giants when he backhanded home a feed from Tyler Benson off a two-on-one for his first career playoff goal.

Noah Gregor responded with Victoria’s lone goal of the game at 12:08 of the third period to end David Tendeck’s shutout bid, but the Giants answered with a strike of their own at 15:16 off the stick of James Malm to secure the 5-1 lead and victory.

Final shots were 36-33 for Victoria who finished the game one-for-five on the power play. They are two-for-14 on the series with the man advantage. The Giants countered with a one-for-three clip on the power play and are one-for-eight through three games.

With the win the Giants now lead the best-of-seven series by a 2-1 margin and will look to make it a 3-1 advantage when they host the Royals for Game 4 on Thursday, March 29th at 7:00 PM.

GET TICKETS TO GAME 4 HERE