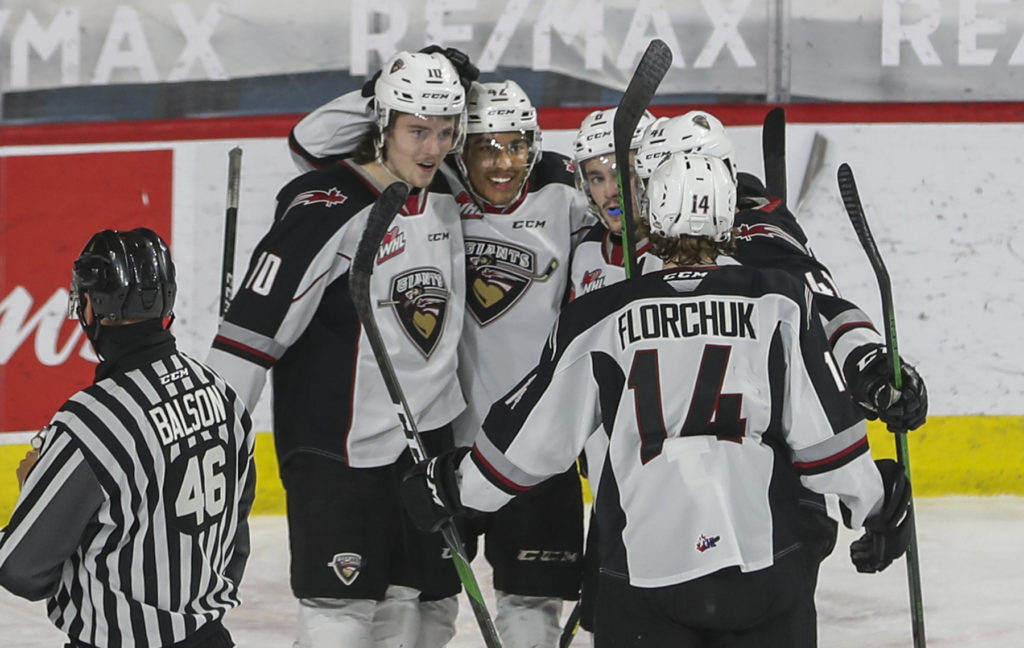 Friday night in Kamloops, the Vancouver Giants (11-9) earned a 6-2 victory over the visiting Kelowna Rockets (8-4-1-0). Tristen Nielsen (2G, 2A), Justin Sourdif (2G, 1A) and Eric Florchuk (2A) combined for nine points, and Trent Miner stopped 19 shots in the victory. Kaedan Korczak and Steel Quiring responded with the goals for Kelowna. The Giants power play went a perfect three-for-three and their penalty killing efforts landed them two shorthanded goals.

VAN – 1:52 into the game, Tristen Nielsen scored off a shorthanded two-on-one rush. Nielsen’s team-leading 14th of the season was set up by Eric Florchuk, and came off the first shot of the game for the Giants.

VAN – Tanner Brown extended the Vancouver lead to 2-0 at 5:13. His shot from the left-wing circle made its way up and over the right shoulder of Roman Basran. Zack Ostapchuk earned an assist that came off a Rockets turnover.

KEL – Back came the Rockets at 6:34. Steel Quiring knocked home his own rebound off a scramble in front of the Giants net for his second of the season. Elias Carmichael and Dylan Wightman both assisted.

VAN – A five-on-three power play goal moved the Giants back ahead by two goals. It came courtesy of Tristen Nielsen off a shot from the slot. Alex Kannok Leipert and Justin Sourdif both earned power play assists.

VAN – 34 seconds later on a five-on-four power play, the Giants struck again. It was Justin Sourdif converting off a tic-tac-toe passing sequence that also involved Tristen Nielsen and Zack Ostapchuk.

VAN – The final goal of the period came shorthanded off the stick of Justin Sourdif. Sourdif’s initial attempt off the rush was stopped by Roman Basran, but the rebound bounced off of traffic in front of the Kelowna net and in. That spelled the end of Roman Basran’s night who was pulled in favour of goaltender Cole Schwebius.

VAN – The Giants power play continued to click in the third period. Adam Hall took a feed from Eric Florchuk and wired home his seventh of the season. Tristen Nielsen also assisted on the third power play goal of the night for the Giants.

KEL – The final goal of the game came courtesy of Kaedan Korczak on a Kelowna power play. His third of the season came off a wicked shot from the high slot. Tyson Feist and Alex Swetlikoff both earned the assists.

Next Giants Game: Tomorrow night the Giants return to action with a home game against the Kamloops Blazers. The puck drops at 7:00 PM.