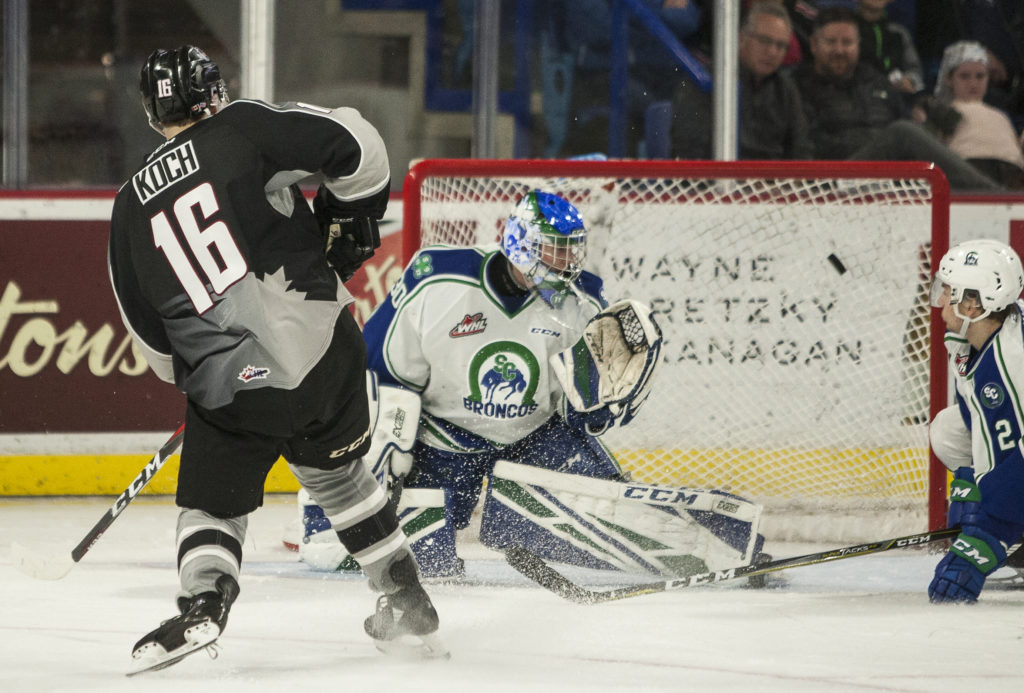 Tuesday night in Langley the Vancouver Giants set a new single-game franchise record for shots with 71 and earned a 6-2 victory over the visiting Swift Current Broncos in the process. Bowen Byram (two goals, one assist) and James Malm (three assists) each had three points for the G-Men while three other Giants recorded multi-point games in the win. Broncos goaltender Joel Hofer turned aside 65 shots and earned third star honors while Tanner Nagel and Ben King responded with goals for the visits who fell to 1-8 on the season. The win pushed the Giants Western Conference leading record to 9-1-1-0.

26 of the Giants 71 shots came in the first period while the Broncos responded with four. Bowen Byram grabbed the game’s first goal for the Giants exactly five minutes into the game on a power play that finished three-for-seven on the night for Vancouver. Alex Kannok Leipert secured the lone assist on Byram’s first of two goals on the night.

Dawson Holt extended the Giants lead to 2-0 at 13:18 when he drove wide on the defender down the left-wing, took a feed from Brayden Watts and snuck a backhand shot through Hofer and home for his second of the season.

Shots in the second period were 20-7 for the Giants who, for a second straight period got an early goal from Bowen Byram. This one came at 4:51 off a wrap-around. Owen Hardy and Dawson Holt earned the helpers on Byram’s fourth goal of the night.

At 8:38 of the second the Broncos got on the board thanks to a terrific individual effort from 20-year-old Tanner Nagel, who beat the defense wide, cut in front of Giants starter David Tendeck and snuck his first of the season past his right pad.

Davis Koch restored the Giants three-goal cushion at 7:09 of the third period off a two-on-one rush. Koch’s goal was assisted by both James Malm and Ty Ettinger.

Towards the end of the third, the Swift Current Broncos took a pair of major penalties which resulted in a lengthy five-on-three power play for the Giants that resulted in two more goals courtesy of Dylan Plouffe (14:15) and Alex Kannok Leipert (16:10).

Ben King added a late goal for the Broncos at 19:06 of the third period, but ultimately the Giants outshot the Broncos 25-5 in the final frame en route to the 6-2 victory and the 71-16 edge in shots.