Giants Rally To Earn a 4-3 Overtime Victory in Kelowna 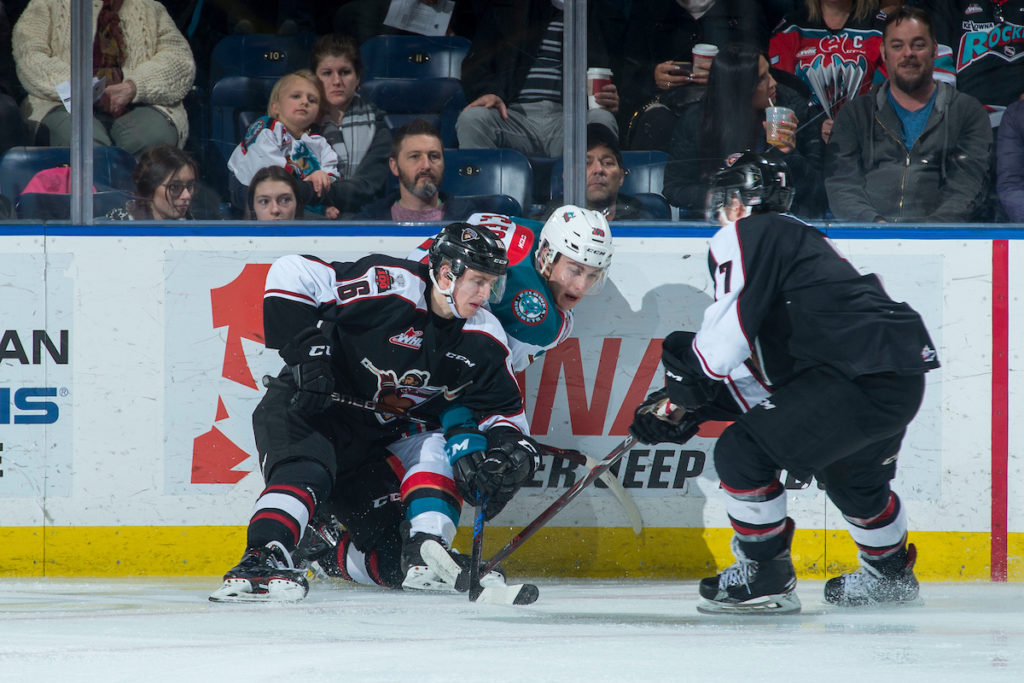 Wednesday night at Prospera Place in Kelowna, B.C. the Vancouver Giants erased a 3-2 third period deficit en route to a 4-3 overtime victory over the B.C. Division leading Kelowna Rockets. Alex Kannok Leipert tied the game with 3:38 remaining in the third and captain Tyler Benson won the game for Vancouver with a minute and four seconds remaining in overtime giving the Giants their 34th win of the season and their first in Kelowna since March 2011. Carsen Twarynski responded with two power play goals for the Kelowna Rockets who have now dropped five straight games.

The first six minutes of the first period belonged entirely to the Rockets. They built up a 5-0 shots advantage and a quick 1-0 lead. Erik Gardiner buried a Braydyn Chizen rebound past Giants starter David Tendeck at 2:19 of the first to give the home-side the early lead.

Back came the Giants at 7:44 when Owen Hardy, who hadn’t played in a game since February 9th against Seattle, skated in close on Rockets goaltender James Porter from the left-wing corner. Hardy then snuck a backhand past Porter’s glove and in for his 11th and a 1-1 tie.

Shots through one period were 12-9 Kelowna but the score was tied 1-1.

The two teams would combine for three goals in the middle frame, all of which came on the power play. First it was Ty Ronning for the Giants who parked himself at the right side of the Kelowna net and knocked home a pass from Brayden Watts for his team-leading 56th goal. Vancouver’s power play would finish the game one-for-two.

Back came the Rockets who caught a lucky break when Carsen Twarynski’s shot from the left circle bounced off the glass behind David Tendeck, back off a crowd in front of Tendeck and in for Twarynski’s 41st and his first of two on the night. That goal came just over five minutes after Ronning’s go-ahead goal for Vancouver.

Twarynski struck again in the final minute of the second on a four-on-three power play when he on-timed home a bullet shot from the high slot past the glove of Tendeck for his 42nd. Kelowna took the 3-2 lead into the second intermission holding a 24-17 shot advantage.

Vancouver burst out of the gate in the third period and came close to tying it a few times. Every time though James Porter had the answer for Kelowna who maintained their 3-2 advantage until the later stages of the third.

Fresh off a big penalty-kill, the Giants recorded the equalizer at 16:22 when Alex Kannok Leipert joined the rush and pounced on a James Malm rebound and wired home his fifth past a sprawled James Porter.

The remaining 3:22 of the final period came and went with neither team solving the other.

Both goaltenders came up aces in the early minutes of overtime. David Tendeck made a sliding save to his left off a one-timed shot from Conner Bruggen-Cate while James Porter robbed James Malm off a one-timed chance from the right-wing.

With time winding down in OT, David Tendeck made a massive glove save off Carsen Twarynski form in close. 35 seconds later the Giants got a point-blank chance of their own and made it count.

Tyler Benson ended the game and the Giants lengthy losing-streak in Kelowna when he wired home a snap shot from the left-wing circle past Porter for his 24th. His goal was assisted by both Dylan Plouffe and Jared Dmytriw. For Benson it was his second overtime winner of the season.

Final shots slightly favored Kelowna by a 38-36 margin. The Rockets went two-for-four on the power play while the Giants went one-for-two. The victory for Vancouver improves their overall record to 34-33-6-3 and moves them back within three points of the second-placed Victoria Royals in the B.C. Division standings. The Giants still hold two games in hand. The Rockets, with their single point lead Victoria by three points for top spot in the division.

Up next for Vancouver, a southbound trip to Kennewick, WA to battle the Tri-City Americans at 7:05 PM on Friday night.