Giants Down the Raiders 5-4 in Overtime 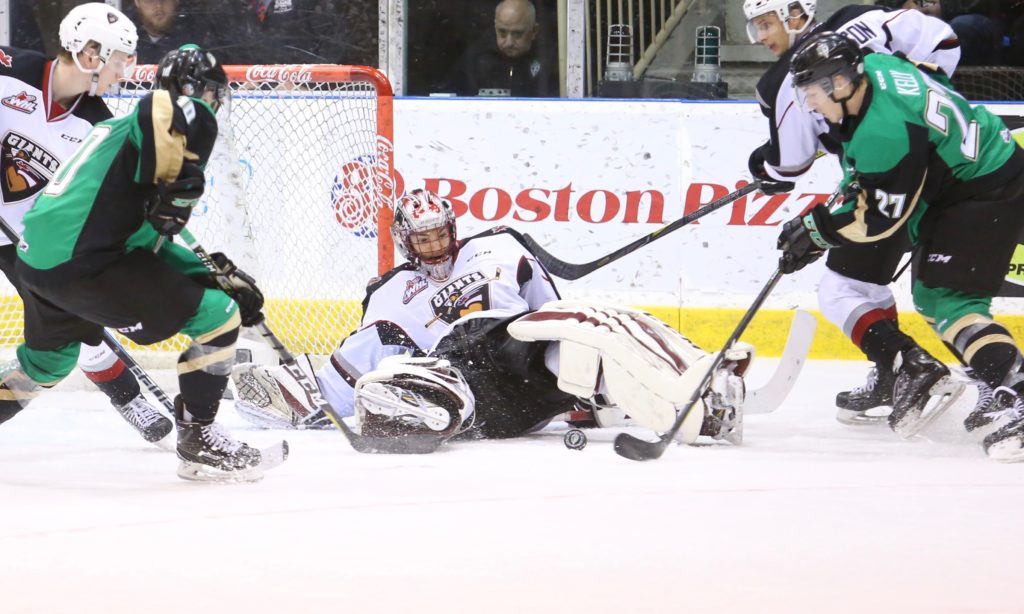 Saskatoon’s Dawson Holt picked the perfect opportunity to score his first of the season. Tuesday night in nearby Prince Albert, SK the Giants earned a 5-4 overtime victory over the Prince Albert Raiders thanks to Holt’s winner at 2:35 into the extra period. Ty Ronning struck twice in regulation for the Giants while goaltender David Tendeck rallied to stop the final 24 shots he faced to secure his third victory of the season in goal.

The two teams combined for five goals in the first 5:21 of the first period. Brayden Watts got the Giants on the board at 1:33 when he knocked a James Malm feed past Raiders starter Curtis Megre and home for his team-leading seventh of the season.

48 seconds later Ty Ronning grabbed his first of two on the night when he beat Curtis Megre on a breakaway with a backhand deke.

Prince Albert countered with two quick strikes of their own. First Jordy Stallard stepped across the blueline and snapped a high shot past the blocker of David Tendeck at 3:45. Then a minute and 15 seconds later Sergei Sapego pounced on a loose puck in a scrum in front of the Giants goal and snuck a backhander home for his first WHL goal.

31 seconds after the 2-2 goal, Ty Ronning made it 3-2 for Vancouver off a shot from the right-wing circle off the rush. That goal spelled the end of the night for Megre who left the game with one save off four shots faced. In came veteran Nicholas Sanders who finished with 33 saves on 35 shots faced.

Late in the first period the Raiders countered with two more goals of their own. Parker Kelly made it 3-3 when he finished off a three-on-two rush with Cole Fonstad and Jordy Stallard. Then with 1.4 seconds remaining in the first, Sean Montgomery buried his fourth off the season to give the Raiders the lead after 20 minutes of play.

Jason McKee elected to keep David Tendeck in the net for Vancouver and that decision paid off in a big way. Tendeck was flawless the rest of the way stopping eight in the second, 13 in the third and then three more in overtime.

Tendeck’s best save of the game arguably came early in the second period when he denied D-Jay Jerome off a redirect which came on a five-minute Raiders power play. Giants defenceman Darian Skeoch got kicked out of the game for an alleged check to the head, but the Giants managed to kill off the entire five minutes.

At 8:25 of the second the Giants got back on even terms when Alex Kannok Leipert’s point shot deflected off a Raider defenceman and past Nicholas Sanders. Kannok Leipert’s first of the season was assisted by both Brad Morrison and Owen Hardy.

Neither team would solve the other for the remainder of regulation time and for the third time in four games the Giants went to overtime.

Prince Albert thought they’d won the game early in the overtime period, but David Tendeck made a terrific save off Curtis Miske in close.

That set the stage for Dawson Holt who took a Brendan Semchuk pass in the neutral zone, cross the blueline and fired a low shot off the post that bounced off Sanders and in to seal the deal for the Vancouver Giants who improved their record to 3-4-1-1 with the win. The victory marks their first road victory of the season and moves their record on the road trip to 1-1-1-1. They outshot the Raiders 37-33 and both teams went zero-for-two on the power play.

Next up for the Giants: The Saskatoon Blades on Wednesday night from the Sasktel Centre in Saskatoon.