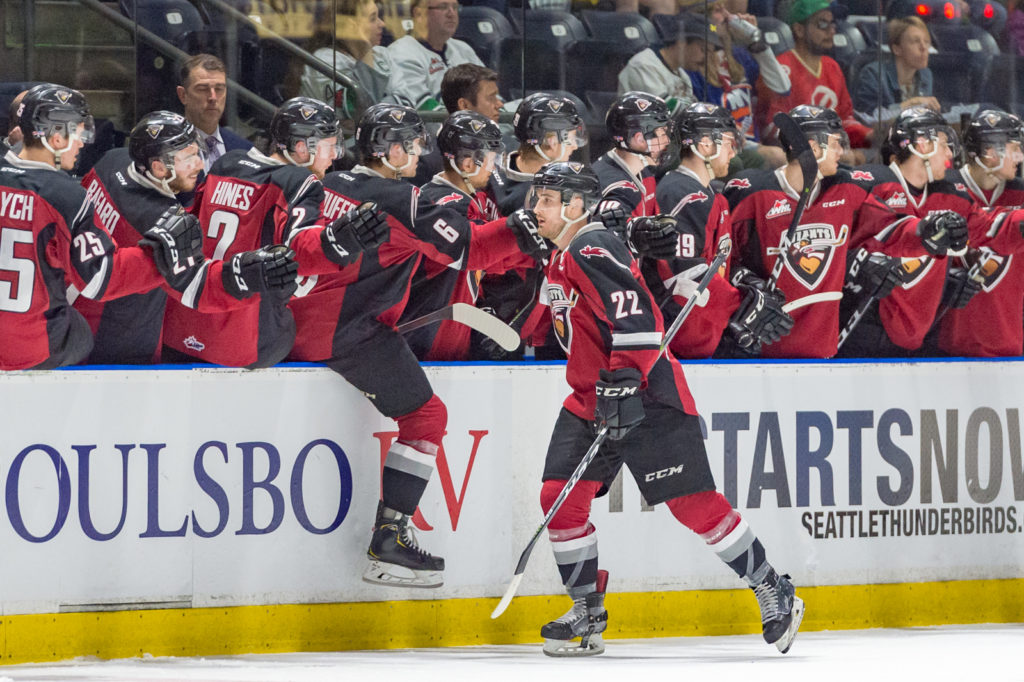 The Vancouver Giants are off to Round 2 of the Western Hockey League playoffs! Saturday night at the ShoWare Center in Kent, WA the Giants earned a 5-1 victory over the Seattle Thunderbirds, earning a 4-2 series victory in the process. Jadon Joseph scored twice for Vancouver while Davis Koch added three assists. David Tendeck stopped 33 of the 34 shots he faced between the pipes for the G-Men to earn his second victory of the series. Seattle’s lone goal came late in the third period off the stick of Andrej Kukuca.

VAN – 11:01 into the first period the Giants took a 1-0 lead when Bowen Byram took a Davis Koch feed from the right-wing boards, skated into the left-wing circle and wired home his third of the series past Seattle starter Roddy Ross.

VAN – At 7:14 of the middle frame, Giants captain Jared Dmytriw secured the eventual series-clinching goal while shorthanded. Dmytriw skated the puck out of his own zone down the left-wing, raced wide on a pair of Seattle defenders and then roofed his first goal of the series over the right-shoulder of Ross to make it 2-0 Giants. It was the second shorthanded goal of the series for Vancouver.

VAN – Jadon Joseph (5) potted his first of two goals on the night at 15:08 when he one-timed home a feed from Alex Kannok Leipert from the high-slot. Brayden Watts recorded the second assist on the play.

VAN – Jadon Joseph wasn’t done. At 18:13 of the second, Joseph notched his second of the period and sixth of the series off a Bowen Byram rebound in close. The second assist belonged to Davis Koch.

VAN – 2:40 into the third Tristen Nielsen nabbed the final goal of the game for the Giants when he skated into the slot, took a feed from Davis Koch and placed a perfect backhand shot past Ross for his second of the series.

SEA – At 15:32 of the final frame Seattle got on the board when Andrej Kukuca crashed the net and one-timed home a feed from Noah Philp from the left-wing. For Kukuca it was his team-leading fourth goal of the series.

Vancouver: 1/3 on the power play

Seattle: 0/5 on the power play

Next Giants Game: Friday, April 5th at 7:30 PM against either Kamloops/Victoria.