Giants Prevail In A 5-4 Overtime Thriller Over Edmonton 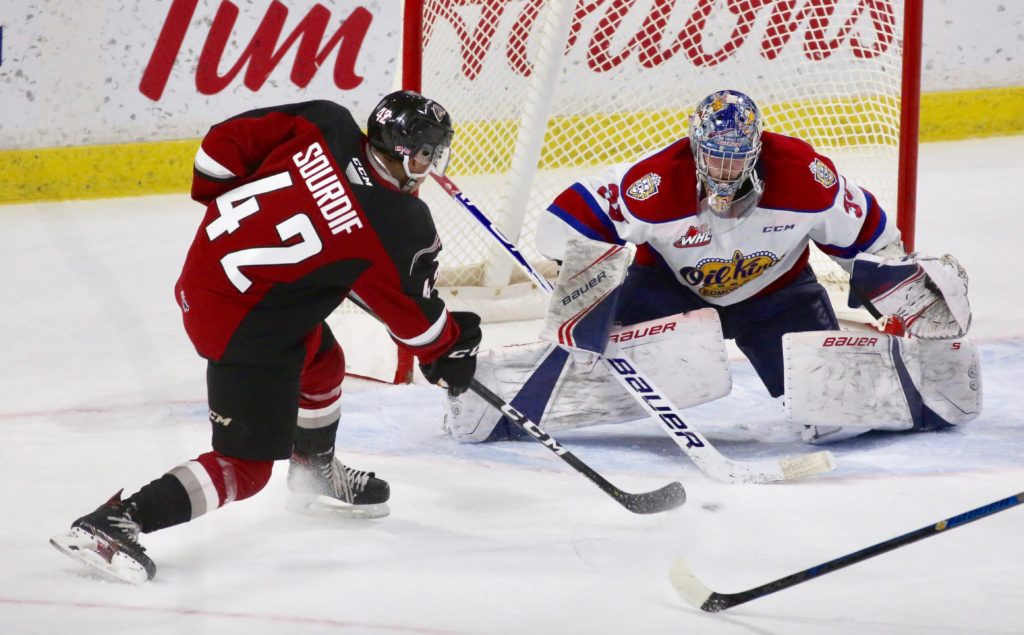 Saturday night at the Langley Events Centre the Vancouver Giants (12-10-1-1) earned a thrilling 5-4 overtime victory over the Edmonton Oil Kings (14-5-4-2). 2020 NHL Draft prospect Justin Sourdif ended the game at 2:57 of overtime off a feed from Bowen Byram. Tristen Nielsen added two goals and an assist for the Giants in regulation while Dylan Plouffe chimed in with three assists. Other goals came via Milos Roman and Cole Shepard. Riley Sawchuk and Jake Neighbours each had two points in response for the Oil Kings.  Giants goaltender Trent Miner stopped 32 of the 36 shots he faced in the game, including a Carter Souch penalty shot with 2.1 seconds left in the third period to keep the game tied. Todd Scott countered with 26 saves in the Edmonton net.

SOURDIF’S OT WINNER LIFTS THE GIANTS OVER THE OIL KINGS

VAN – 3:57 into the game, Milos Roman’s (11) shot from the left-wing point snuck through traffic and past Todd Scott to give the Giants the 1-0 lead.

VAN – Cole Shepard (5) extended the Giants lead at 18:56 off a quick shot from the slot. Dylan Plouffe and Jackson Shepard both assisted.

VAN – 14 seconds into the middle frame, Tristen Nielsen (11) knocked home a Justin Sourdif rebound off the rush to make it a 3-0 lead for Vancouver.

EDM – Dylan Guenther got Edmonton on the board at 2:18 off a one-timer from atop the left-wing circle on the power play.

EDM – Riley Sawchuk grabbed his team-leading 12th goal at 17:06 off the rush on a high shot from the slot that snuck under the bar and in.

EDM – Matthew Robertson (6) tied the score for Edmonton at 7:22 on a shorthanded breakaway.

VAN – Tristen Nielsen (12) countered with a shorthanded marker of his own at 8:49 off a Milos Roman rebound.

EDM – Josh Williams converted on a power play for Edmonton at 12:31 off a Jake Neighbours feed to even the score at 4-4.

*Edmonton forward Carter Souch was awarded a penalty shot with 2.1 seconds remaining in the third period. He skated in close on Trent Miner and rung his shot clean off the left post, ensuring overtime for the fourth time this season for the Giants.

VAN – Justin Sourdif cemented the victory for the Vancouver Giants at 2:57 of overtime off the rush when he snuck a low shot through the legs of Todd Scott and in. Sourdif’s 10th goal of the season was assisted by both Bowen Byram and Dylan Plouffe.

A first star performance from @tristen_080 tonight after a 5-4 Giants OT victory over Edmonton. pic.twitter.com/cCInG8dPiT

Next Giants Game: Friday, November 29th in Spokane against the Chiefs.