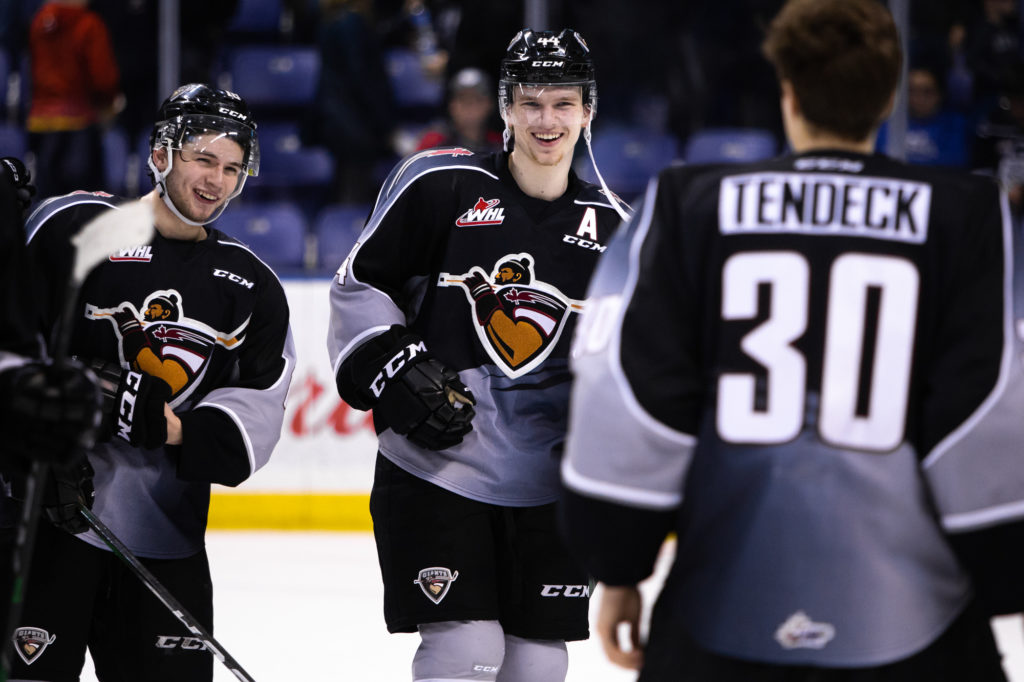 The Vancouver Giants are now two-thirds of the way towards a perfect weekend. Saturday night in Victoria the G-Men (19-18-2-2) earned a 6-2 victory over the Victoria Royals (25-15-3-0) in the back-half of a home-and-home series. Michael Dyck’s Giants scored a season high four power play goals as five different forwards recorded multi-point games. Jackson Shepard led all Giants with a goal and two assists. Trent Miner made 19 saves in goal for Vancouver who are now just three points shy of third place in the B.C. Division standings. Phillip Schultz and Gary Haden scored for Victoria.

VIC – Royals captain Phillip Schultz opened the scoring at 5:17. Defenceman Will Warm’s pass from the right-wing point found Schultz in front. From there, Schultz snuck a forehand shot past the stick of Trent Miner for his seventh goal of the season.

VAN – With one minute and 12 seconds left in the period, Jackson Shepard tied the game for Vancouver with a power play deflection. Shepard (7) parked himself in front of the net and tipped home a Michal Kvasnica point shot. The power play was far from done.

VAN – 22 seconds into the second, Tyler Preziuso (16) converted off a two-on-one rush with Tristen Nielsen to give the Giants the lead. Jackson Shepard added the second assist.

VAN – Rookie Zack Ostapchuk then got in on the act, one-timing his fifth of the season past Victoria’s Adam Evanoff in close off a Justin Sourdif pass at 2:56.

VAN – Eric Florchuk then notched his fourth goal of the weekend on a five-on-three power play chance for the Giants. Florchuk’s 15th goal of the season came off a one-timer from the right-wing circle. Bowen Byram and Tyler Preziuso assisted.

VAN – Justin Sourdif made it 5-1 at 13:57 off a scramble In front of the Victoria goal. Sourdif’s 14th goal of the season came via the power play and was set up by Holden Katzalay and Michal Kvasnica.

VAN – The final power play goal of the night for the Giants came courtesy of Cole Shepard (9) at 12:25 off a shot from the slot that was set up by both Jackson Shepard and Alex Kannok Leipert.

VIC – With 3:30 remaining, Gary Haden scored his 15th of the season on a power play. Brayden Tracey and Mitchell Prowse both added assists.

Next Giants Game: Tomorrow night at home against Kamloops at 4:00 PM.