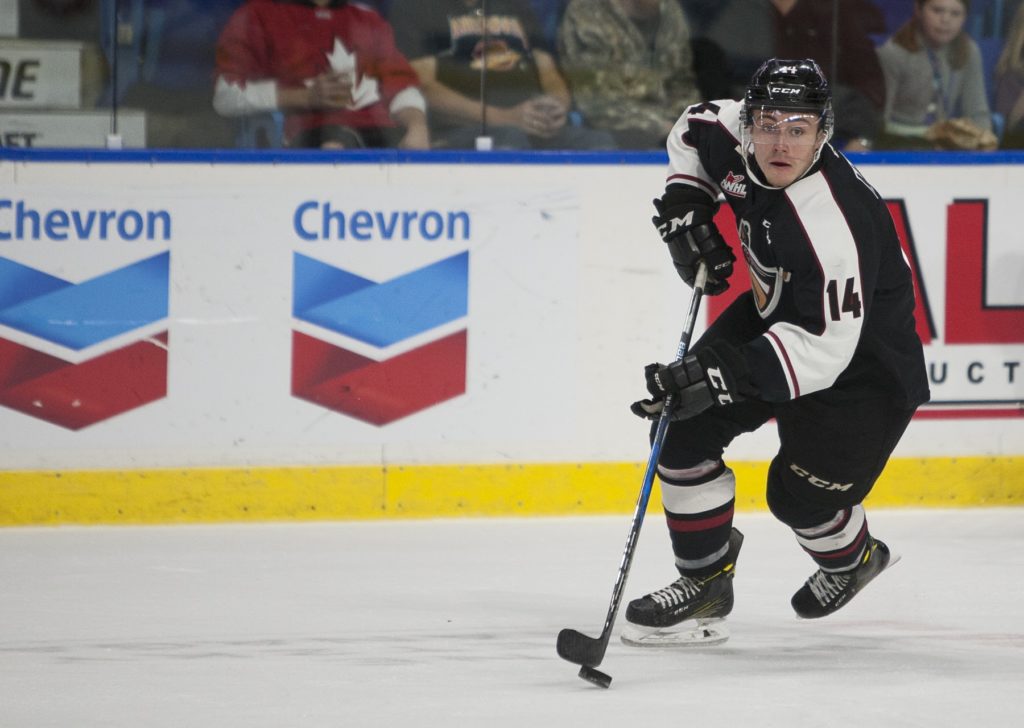 Originally selected by the Giants in the second round (44th overall) in the 2014 WHL Bantam Draft, James Malm has become a bonafide offensive threat in the Western Hockey League. Last season he finished third in team scoring with 19 goals and 47 assists for 66 points and was the only homegrown Giant to suit up in all 72 games during the 2017-18 season. He added two goals and an assist for the G-Men in seven playoff games. Through 166 career regular season games, Malm has notched 39 goals and 80 assists for 119 points. Expectations are high for the Giants heading into the 2018-19 campaign, and Malm has equally high expectations for himself as he looks to be one of the primary ‘go-too’ guys once again for the Vancouver Giants. Here’s a Q & A with James Malm from an interview that took place in Langley, B.C. on May 15th with Giants broadcaster Dan O’Connor.

DO: Game 7. Victoria Royals. Are you over it? Or do you still think about that game?

JM: “It bites you. It sucked. But as an athlete, it happens. Losing happens. I didn’t want to think about next year when it happened. But after four or five days your mind starts to change focus. You start thinking about next year and wanting to get back at it. Next year, let’s go to Round 2 and beyond.

DO: But there was a genuine belief right? Like, the whole team knew that they had a chance to win that series?

JM: “I thought we were going to win. Everybody in the room did. I mean, Game 6 at home, in overtime, we’re leading the series 3-2. It would have been nice, especially for the fans because they got really into it.”

DO: From a player’s perspective, how much of an impact did the LEC crowd have for you guys during the playoffs?

JM: “Our fans had a purpose. You felt it in a big way. I think you feel it more in a smaller rink. The fans were just so invested into every game. In some of the bigger rinks it doesn’t always feel like the fans can effect the game as much, but in Langley everybody got so into it, and they were so loud.”

DO: No Tyler Benson next year. No Ty Ronning next year. Tell me about the legacy that those two players leave behind?

JM: “Those were our top guys. We looked to those two to lead the way. Now somebody else has to step up and be that top guy. That’s how I think a lot of the guys are looking at it.”

DO: Do you want to be one of those top guys?

JM: “For sure. I definitely want to be one of those guys.”

Tip of the hat to @James_Malm as he pots his third of the evening to make it 8-1 pic.twitter.com/qYVozo2gwO

DO: In the playoffs you, Ty Ronning and Milos Roman were excellent together. Did you like playing with those two?

JM: “Definitely. And knowing that Milos is probably coming back is huge. I think we had great chemistry together and I could see that working really well next year.”

DO: Up front, who do you think is ready to break out next season?

JM: I think you’re going to see improvement from a lot of guys, but one of the big ones for me is Tyler Popowich. You saw the effort that he was making to get better this past year. He’s elite. Confidence is such a big thing for him and for any of us but I’m really excited to see what he can do next season. He’s a big guy. He’s strong. He’s the one for me that I’m rooting for the most.

DO: David Tendeck and Trent Miner coming  back in goal. Does it get any better than that?

JM: Both are elite guys. What I saw from Trent was a crazy-good 16-year-old goalie. I can’t think of another 16-year-old like him. And David was an all-star in our league, and improved so much from a season ago. As a player, it’s crazy how much more confident you feel when you’ve got either one of those guys between the pipes.

DO: And back to you. You’re coming into your 19-year-old season. How are you feeling?

JM: It’s time to shine. It’s time for me to step up. I’m not a middle-ager anymore. I’ll be an older guy and I’ll be ready to seize the opportunity and earn my ice-time and I want to be counted on to help the team win.

DO: Do you have a personal goal for yourself?

JM: I’ll just keep that to myself. Haha. But I’m excited about this summer. There’s a lot of time to get better. I think about getting better all the time.

DO: Lastly, do you feel that being a Vancouver Giant is maybe a ‘bigger deal’ now compared to a season or two ago for you? Have you noticed a change in the culture?

JM: Yeah definitely. We’re not a losing team anymore. We’re not an easy win for anybody anymore. It’s great coming to the rink when you’ve got confidence and when you’re winning. It makes everything easier. We had that last season and this season I’m expecting there to be more of the same.

“It’s time to shine. It’s time for me to step up. I’m not a middle-ager anymore. I’ll be an older guy and I’ll be ready to seize the opportunity and earn my ice-time and I want to be counted on to help the team win.”