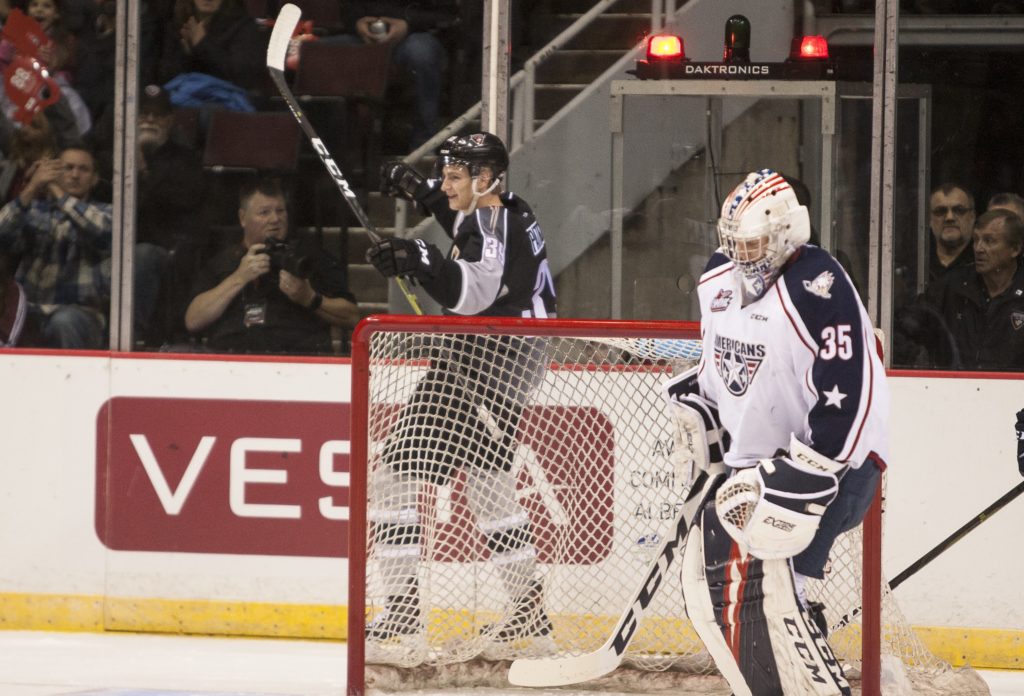 Vancouver Giants forward Evan Patrician is gearing up for an important second season in the WHL.

Originally drafted by the Giants in Round 7 in 2016, Patrician joined the team full-time in 2018-19 and set a positive tone for himself from the beginning. He practiced hard, asked the right questions, and became a trusted forward during the Giants pursuit of the Western Conference championship.

Patrician finished his rookie campaign with a goal and eight assists, but added a +13 rating which ranked sixth among all Giants. He appeared in 19 of the Giants 22 playoff games

DO: Game seven. Have you and your Giants teammates moved on?

EP: It still stings. Every time I step in the gym I push myself that much harder. I’ve never been that close to a championship before. It stings when people ask me about it. It makes me want to change the outcome next year.

DO: Were you happy with your first season with the Giants? Was it what you expected?

EP: It was good, I got a taste of it when I was 15 and 16 but it’s a lot different when you’re full time. it’s a lot harder and the days are longer. Once I got into a routine I got comfortable. I really enjoyed my first season.

DO: Take me back to training camp, was it Giants or bust for you?

EP: I had a lot of people telling me, “You’re going to make the team,” but I knew there were no guarantees with a new coach and a new GM. With training camp, I went out and tried to prove what I could do. I performed well and I was happy that I got to be a full-time member because I didn’t want to play anywhere else.

DO: Was there a moment that sticks out to you knew the Giants were that good?

DO: Who were some of the guys early on that really helped your transition to the Giants?

EP: When I was 15 Marcus Kichton really helped me. He talked to me a lot and I lived with him for the first time when I came to Vancouver. Then when I was 16, I lived with Darian Skeoch and he was probably the most liked guy on the team. This year Davis Koch was great.

DO: Who’s the guy on your team that maybe doesn’t get the credit he deserves?

EP: I would say Owen Hardy. He’s one of the hardest workers on the team and he might not put up the big numbers but he’s a big part of our team. Every rep against him in practice is hard and he pushes you. I think he deserves a lot of credit. He’s going to have a big season.

DO: What do you remember about your first WHL goal?

EP:  I remember coming out of the penalty box and the puck came to me. I put my head down and shot the puck as hard as I could. I don’t remember seeing it go in, I just remember seeing the red light turn on. I’ll never forget it. I had a lot of texts after the game from friends and family.

DO: Do the expectations change for you personally heading into next season with the Giants?

EP: They absolutely do, yes. I want to play a bigger role on the team next year, move up the lineup and just keep improving every day. Even more, I want to contribute to the team on both sides of the puck and be a consistent guy that the coaches can call upon for any situation.

DO: What was it like watching Bowen Byram and Trent Miner get drafted?

EP: It was awesome. They’re two of the hardest working guys I’ve ever met. They deserve all of their success. Not to mention, it’s really cool that they both get to go to Colorado and start their journey there together.

DO: How do you unplug from hockey?

EP: My buddies and I like to go to the Bow River and play spike ball. We do that quite a bit – Probably two or three times a week. But hockey is always in the back of my mind. Every day when I train, I think about the game.

DO: Are you okay with the even larger expectations that come with next season?

EP: Everyone thought we were in a weak division, but we proved in the playoffs that we were a top team. We’ve got a great core group coming back and we expect the same kind of push. Clearly the expectations are going to change, but I think we’ll handle it well.

DO: Which Giants teammate, above all, do you think is ready to breakout next season?

EP: Lukas Svejkovsky is going to have a breakout year. He showed some great signs this past season and he has unbelievable skill and playmaking ability. So, I feel he’s going to put up some big numbers and he’s absolutely going to be a key guy for us.

DO: Are you excited to return to Vancouver?

EP: I love it there. It’s my second home. It’s awesome going to the rink every day and battling with twenty of your brothers. The season is creeping up quickly and I can’t wait to come back.