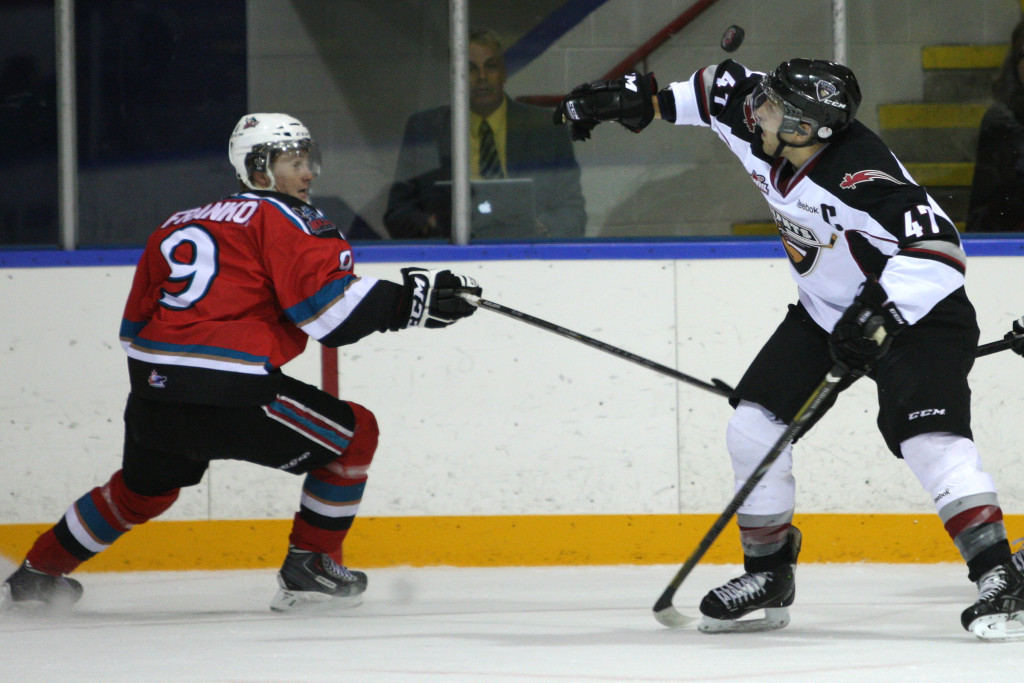 Dalton Thrower is back, and he might just be exactly what the Western Hockey League’s Vancouver Giants need.

The 19 year-old defenceman, who spent the last four seasons with the Saskatoon Blades, had an opportunity to be a part of the 2013 Memorial Cup Tournament as Saskatoon was the host city.

It didn’t go the way the Blades had planned.

Saskatoon (44-22-2-4) finished second in the Eastern Conference during the regular season, but when it came to the playoffs, the pressure seemed to be too much.

The Blades were matched up against the seventh-place Medicine Hat Tigers in the quarterfinals.

The Tigers swept the Blades, winning all four games in the series and advancing to the semifinals. Saskatoon was eliminated from the playoffs.

Most people in the hockey world were shocked. Eyebrows were raised and questions were asked.

What happened? How could a team that was given an opportunity to host the Memorial Cup Tournament fail to get past the first round of the playoffs? Are the Blades a legitimate contender?

There was one positive going for the Blades – when a team is the host city, they get an automatic berth into the tournament.

The Blades had a second chance, and had 51 days to figure out what went wrong. But even that didn’t help.

Saskatoon finished the round robin with a 1-1 record, and needed to defeat the Ontario Hockey League’s London Kings in a tiebreaker game in order to remain in the tournament.

The Knights defeated the Blades 6-1, and London advanced to the semifinal.

The Blades, however, had to pack their bags and go home. Their season was over.

“[The teams we faced] were able to find our weaknesses and they capitalized,” Thrower confessed. “We weren’t ready to play against those teams and it hurt us.”

Changes to the team were on its way.

Thrower was drafted by the Montreal Canadiens in the 2012 National Hockey League Draft.

The deal between Saksatoon and Vancouver was officially announced on May 27, just one day after the conclusion of the Memorial Cup Tournament. But it was revealed that the trade was actually done at the 2013 Western Hockey League Bantam Draft on May 2.

In exchange, the Giants gave up a conditional second-round pick in the 2014 WHL Bantam Draft. The condition was that if Thrower returned to play for Vancouver for his 20 year-old season, Saskatoon would receive the pick.

“I had talked to Mooner [Lorne Molleken, the Blades’ general manager] at the draft,” Scott Bonner, the Giants’ General Manager, said at the time. “In Dalton’s case, his goal is to play in the pros and he may not play for us next season. But we thought that with Montreal having six or seven defencemen coming back to the AHL, we had a decent opportunity of getting him.”

Kieser was the odd-man out, as he was moved to his hometown team, the Edmonton Oil Kings, in exchange for a sixth-round pick in the 2014 Bantam Draft.

“There is a decent chance that we’ll have Marek back,” Bonner stated after the trade. We thought that it wasn’t fair for him to come to camp knowing that there is a chance that will have guys coming back from pro teams.”

But in junior hockey, changes happen quick. The Giants added forward Tim Traber off waivers prior to their training camp opener, and were back at four overagers.

After the conclusion of the Giants’ pre-season, Traber and Franson returned to Vancouver, while Tvrdon and Thrower had not.

“In Marek’s case, he is a signed player with a salary cap contract and will be given every opportunity to turn pro,” Bonner explained.

We’re assuming that he is not coming back. We think it is the best way to handle it. Obviously, if they decide to send assign him back to us, we’d have a decision to make,” he added.

But on Sept. 29, at around 10:30 PST, the Giants were going to have another 20-year-old back. There was word that Thrower had been re-assigned back to junior by the Hamilton Bulldogs.

It was after the Bulldogs lost to the Toronto Marlies 2-1 in a pre-season game. Hamilton head coach Sylvain Lefebvre called a meeting with him along with a few others.

What was going on?

“We’re sending you back to junior,” Lefebvre told Thrower. “You’re still a young player and being back in Vancouver is probably best for your career and development.

“Obviously there was mixed emotions. You never like being cut from a team,” he admitted. “But I’m very excited to play in front of family and friends every time [we play at home] so it’s a great opportunity for me.”

It was officially announced in the morning.

“We were pumped to have Dalton back. We chased Lorne Molleken for his rights, and getting him back is a big break for us because not only do we get a high-end player, he has leadership abilities that not only help us this season but the seasons beyond,” said Bonner.

“There is no pressure,” Thrower said. “I feel very comfortable with the guys in the locker room and the coaching staff. I’m very excited for this opportunity because this isn’t just for me, but my family and friends because we watched the Giants growing up.”

It is Thrower’s first time of being a team captain in the WHL, so has he spoken to anybody for any advice?

“No, not yet,” he said. “I’m going to ask around, and I want to lead the team in the right direction,” he added.

The Giants have had some early struggles, but Thrower looks to upcoming six-game round trip to turn things around.

“We’re going to a big road trip,” he stated. “This is going to be a great bonding time for our team. We have some new guys so it gives me a chance to get to know all the guys. Good teams have great chemistry so we’re lucky that we have [a road trip] early in the season.”