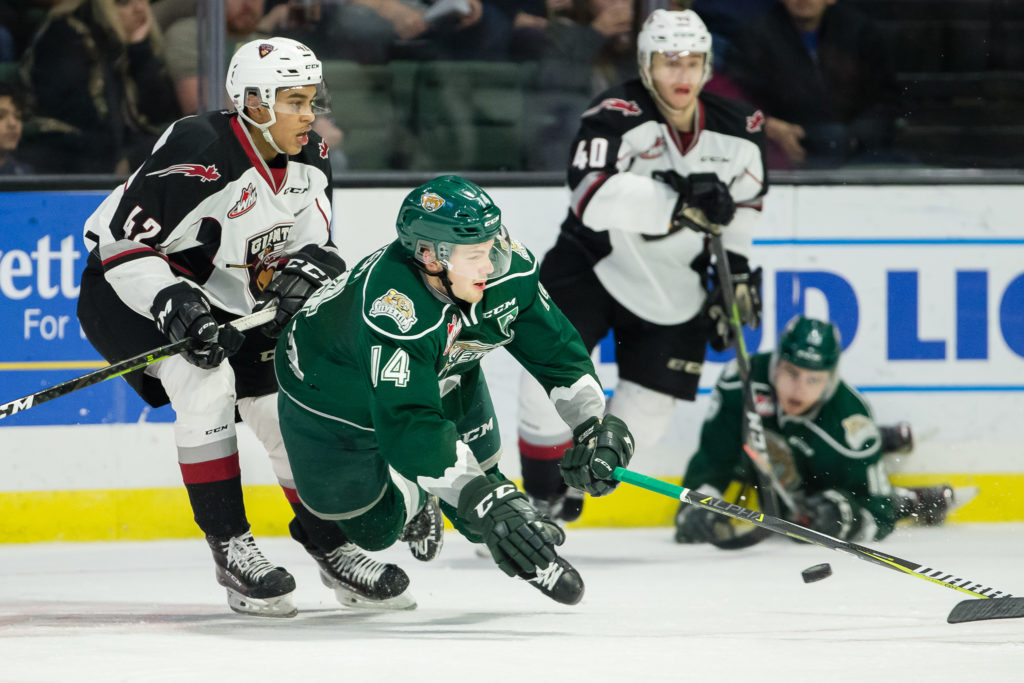 Saturday night in Everett, WA the Vancouver Giants (14-5-2-0) came up just short in a 6-5 decision against the Everett Silvertips (16-7-0-0). Connor Dewar led the charge for Everett with two goals and an assist while Artyom Minulin chimed in with three assists. Jared Dmytriw and Milos Roman each responded with three-points apiece for the Giants who lost in regulation for just the second time on the road this season. The Silvertips led 4-1 with under 10 minutes remaining in the third, but a late surge from the Giants made tonight’s victory anything but easy for the home side. Everett controlled the play for much of the first 40 minutes, and ended up outshooting the Giants 34-26 overall. The victory gives Everett a two-point lead on the Giants for first place in the Western Conference standings.

Giants goaltender David Tendeck was tested early and often in period one. Everett peppered the Vancouver goal with 13 shots and Tendeck stopped 12 of them. The only one that got by him did so at 15:05 off the stick of Minnesota Wild prospect Connor Dewar. The Giants managed five shots in response.

Luke Ormsby increased the Everett lead to 2-0 at the 9-19 mark off the rush. His goal came moments after David Tendeck made another five-alarm save off Connor Dewar off the rush. Davis Koch got Vancouver on the board at 16:02 of the second period off a shot from the high slot that slipped past Everett starter Dustin Wolf. It was Koch’s fourth goal of the season and his first of two on the night. 34 seconds later Everett restored their two-goal lead when Sean Richards buried his first of two on the night on a breakaway. Jake Christensen then made it 4-1 on a power play for Everett at 18:56. Shots through two were 28-15 for the Silvertips.

Goals came fast and furious in the final 10 minutes of the third period. Matt Barberis started the outburst at 10:04 from the point, when he notched his first goal of the season on a power play. Sean Richards responded with his second of the night at 12:50 to give Everett a three-goal cushion. Giants captain Jared Dmytriw beat Dustin Wolf on a power play wrap-around at 15:50 to give the Giants some late life, then Davis Koch moved the Giants back within one a minute and 22 seconds later with the Giants skating six-on-five. At 18:03 Connor Dewar scored the eventual game-winning goal for Everett into an empty net after an apparent trip on Giants defenceman Bowen Byram didn’t get called. 46 seconds later Dawson Holt roofed his fourth of the season past Dustin Wolf from in close off a give-and-go with Milos Roman to make the score 6-5, but that’s as close as the Giants would come. The Silvertips held on to earn their 16th victory of the season, and their first against the Giants in three tries.