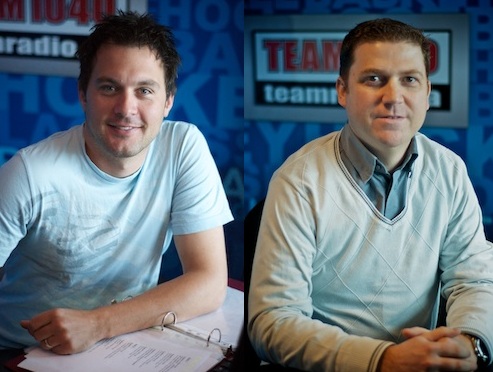 VANCOUVER, BC – With the regular season opener now just 2 weeks away on September 21st, today the Vancouver Giants, in conjunction with TEAM Radio, are proud to announce that two familiar voices will be joining the broadcast team for home games in 2012/2013.

Blake Price has been a staple on TV for many years now, from his early mornings in Saskatoon to his late evenings at Sports Page in Vancouver. Growing up in Winnipeg, he fondly remembers watching WHL hockey with the Winnipeg Warriors at the Arena. Now many years later, after 2 years of covering Junior A hockey on TEAM 1040, he is looking forward to sinking his teeth into the WHL once more. In the past, Price has also called international  hockey on TSN, calling the gold medal games of the World Junior A Hockey Challenge, and the World Sledge Hockey Challenge. At the same time, he has also been seen on CTV Sports and TSN, and had numerous years in sports talk radio before joining TEAM 1040, where he currently co-hosts the mid-day show with Matt Sekeres.

Jeff Paterson brings close to 500 games of Western Hockey League play-by-play experience to the Giants broadcasts. From 1994-1999, he was the voice of the Kamloops Blazers and had the opportunity to call the team’s Memorial Cup victory on home ice in 1995 — with Don Hay as head coach. During that time he had the opportunity to call games featuring up and coming superstars like Jarome Iginla and Shane Doan. Paterson has covered three Memorial Cup championships, a World Junior Hockey championship and has also been involved in a pair of Western Hockey League all-star game broadcasts. The versatile North Vancouver native has 20 years of broadcast experience and has served as a show host, reporter, sportscaster, game analyst and play-by-play announcer in his six years at TEAM Radio.

“It’s a great transition into TEAM Radio for the Giants and to have these 2 well-known broadcasters will make a great show,” stated Giants President and Majority Owner Ron Toigo. “It will also allow Alex Grebenyuk to work with other media at our home games.”

While Blake and Jeff Paterson call the home games and Alex Grebenyuk calls the road games, Bill Wilms will continue to serve as the primary colour commentator for both home and away broadcasts.

For a full breakdown of what games are broadcast where, please visit www.teamradio.ca/giants