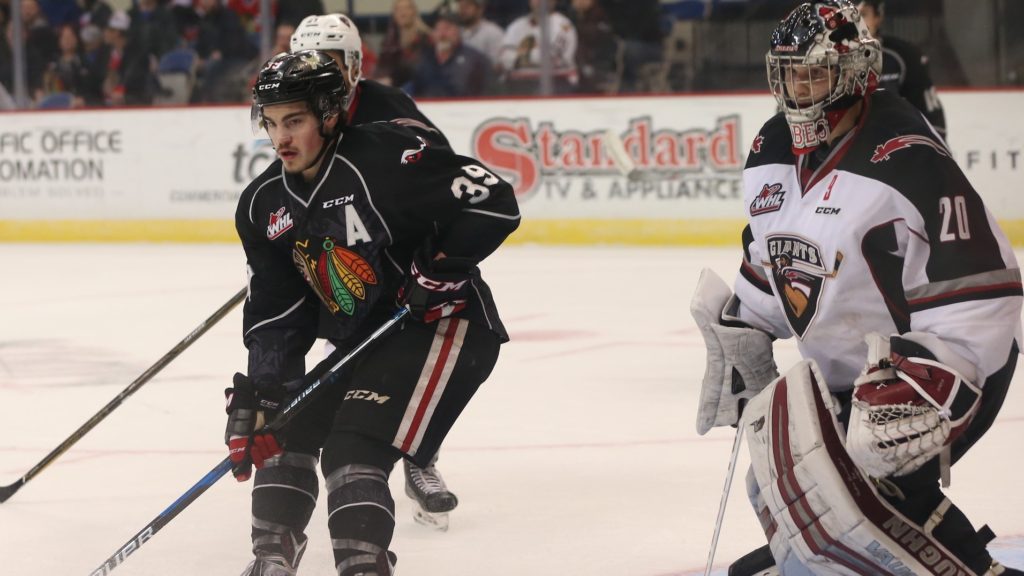 The Vancouver Giants stormed from behind in the closing minutes of the third period to force overtime, but they lost 5-4 to the Portland Winterhawks on Friday evening at Veterans Memorial Coliseum. Ty Ronning, Jack Flaman, Jordan Wharrie and Jordan Borstmayer scored for the G-Men.

Flaman had an opportunity to open the scoring in the first period on shorthanded breakaway, but Portland goalie Cole Kehler stopped his wrist shot from the slot.

Keegan Iverson drew first blood for the Winterhawks in the first minute of the second period, wiring a wrister past Giants’ goaltender Ryan Kubic from the top of the circles. Ronning responded for Vancouver, holding off a check to score on a partial break, and Flaman put Vancouver in front 51 seconds after Ronning’s equalizer with a one-timer from the slot after a nice setup by Calvin Spencer. The Winterhawks got a pair of goals before the end of the middle frame — Skyler McKenzie scored on a power play and Brad Ginnell found the net at even strength — to take a 3-2 lead into the intermission.

Matt Revel put Portland ahead by two goals when he scored his ninth of the season and second as a Winterhawk off the rush with 3:23 left to play in third period, but the Giants wouldn’t go quietly. Wharrie scored from the top of the crease with 1:20 to go after Johnny Wesley found him with a nice pass from the corner, and Borstmayer chipped home a rebound in the final minute to force overtime.

Ryan Hughes ended the game in the extra period when he found a loose puck in front after Iverson drove hard to the net and tucked the puck between Kubic’s legs.

The Winterhawks out shot the Giants 42-31. Vancouver was 0-for-3 on the power play while Portland went 1-for-3.

The two teams will meet again on Saturday night in Portland at 6:00pm.

Vancouver’s next home game will be on Tuesday, March 14th, when the Victoria Royals visit the Langley Events Centre for Don Cherry Night! For tickets, click here or call 604.4.GIANTS (604.444.2687).