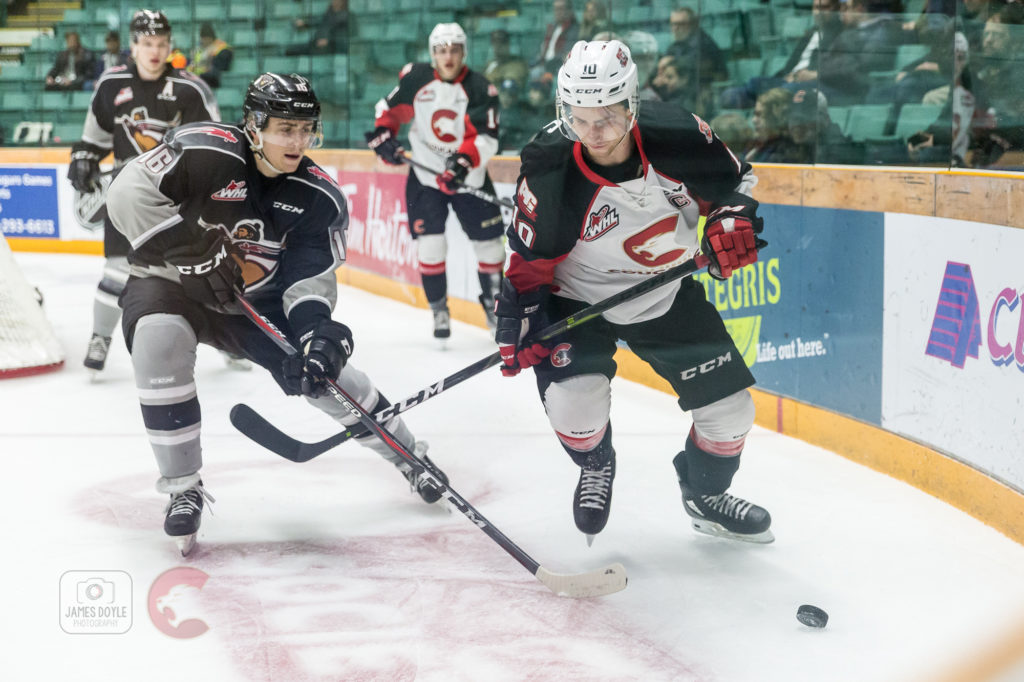 Tuesday night in Prince George the Vancouver Giants (34-13-2-1) skated to a 4-2 victory over the Prince George Cougars (16-30-3-2). Davis Koch, Owen Hardy, Justin Sourdif and Bowen Byram all scored for the Giants while Trent Miner turned aside 20 Cougars shots to secure his 18th victory. Josh Curtis and Vladislav Mikhalchuk responded with goals for the Cougars who have now dropped 10 straight. The win improved the Giants record to 6-1 on the season against Prince George and moved them 18 points up on Victoria for first in the B.C. Division and five points back of Everett for first in the Western Conference.

VAN – Davis Koch (21) opened the scoring for the G-Men off a two-on-one rush with Tristen Nielsen at 16:14. Trent Miner earned the second assist.

VAN – Owen Hardy (9) extended the Giants lead to 2-0 at 5:22 of the second period when he crashed the net and knocked an Alex Kannok Leipert rebound past a sprawled Taylor Gauthier.

PG – Cougars captain Josh Curtis (9) responded at 13:41 with a goal off a two-on-one rush with Tyson Upper.

VAN – 57 seconds later Justin Sourdif (14) scored his second goal in as many games when he took a Milos Roman feed from behind the net and outwaited Gauthier to move the Giants back ahead by two goals.

PG – Vladislav Mikhalchuk (19) moved the Cougars back within two at 16:53 when he one-timed home an Ethan Browne back-door feed that came from above the right-wing point.

Prince George: 1/3 on the Power Play

Next Giants Game: Tomorrow night at 7:00 PM against the Prince George Cougars