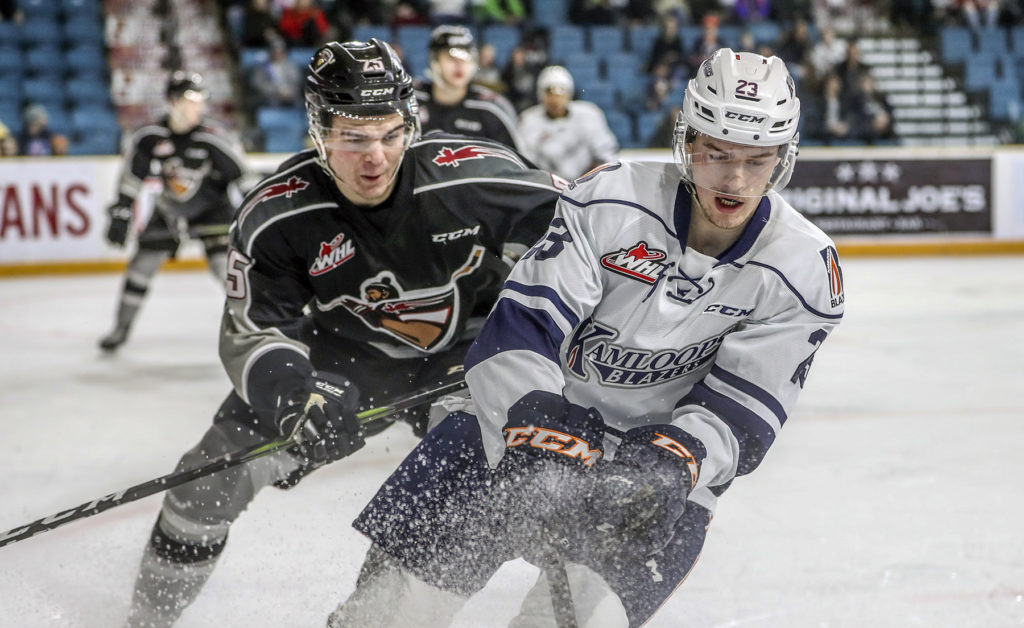 Saturday night at the Sandman Centre in Kamloops the Vancouver Giants (43-14-2-2) earned the sixth consecutive victory over the Kamloops Blazers (26-31-4-2), defeating them by a 5-4 score. Justin Sourdif paced the Giants offense with three assists while Aidan Barfoot, Bowen Byram, Davis Koch, Tristen Nielsen and Milos Roman all scored goals. Trent Miner stopped 26 of the 30 shots he faced in the Vancouver net while the tandem of Dylan Ferguson and Dylan Garand went 23-for-28 for Kamloops. Jermaine Loewen scored twice for Kamloops while Connor Zary added two assists.

VAN – Aidan Barfoot opened the scoring for the Giants at 3:09 when he tipped home a Jared Dmytriw pass for his fourth of the season. Justin Sourdif’s first of three assists on the night also came on that play.

KAM – One minute and 13 seconds later Kamloops answered when Brodi Stuart (17) knocked home his own rebound past Trent Miner at the right side of the goal.

VAN – Bowen Byram restored the Giants lead at the 15:50 mark when he snuck the right side of the goal and slid a Jadon Joseph pass by Dylan Ferguson for his 23rd of the season.

KAM – Jermaine Loewen (22) evened the score at 2-2 for Kamloops when he deflected a Connor Zary feed home from in front of the net. Loewen’s first of two on the night at 4:41.

VAN – One minute and 13 seconds later the Giants took the lead again when Davis Koch (26) one-timed a Justin Sourdif pass through a defender and between the pads of Ferguson to make the score 3-2. Dylan Plouffe added the second assist.

VAN – Tristen Nielsen (12) extended Vancouver’s lead to 4-2 when he beat Ferguson with a shot from above the right-wing circle off a slick feed from Lukas Svejkovsky. That spelled the end of the night for Blazers starter Dylan Ferguson.

VAN – Milos Roman (25) extended his point streak to eight games when he slid a low shot past the left pad of Grand and in at 8:24. It wrapped up a stretch of three goals for the Giants in two minutes and 30 seconds.Bowen Byram and Justin Sourdif both earned assists.

KAM – With 25 seconds remaining in the period, Jermaine Loewen (23) streaked down the left-wing, and tipped a Kobe Mohr feed up and over the right shoulder of Trent Miner to make it a 5-3 game.

KAM – 5:08 into the third the Blazers inched back within one goal when Ryley Appelt registered his second goal of the season off a shot from the left-wing circle off a setup from Connor Zary. But despite a large territorial advantage in the third period, that’s as close as Kamloops would get to completing their comeback.

Vancouver:1/2 on the Power Play

Kamloops: 0/3 on the Power Play

Next Giants Game: Tomorrow at 4:00 PM at home against Kamloops