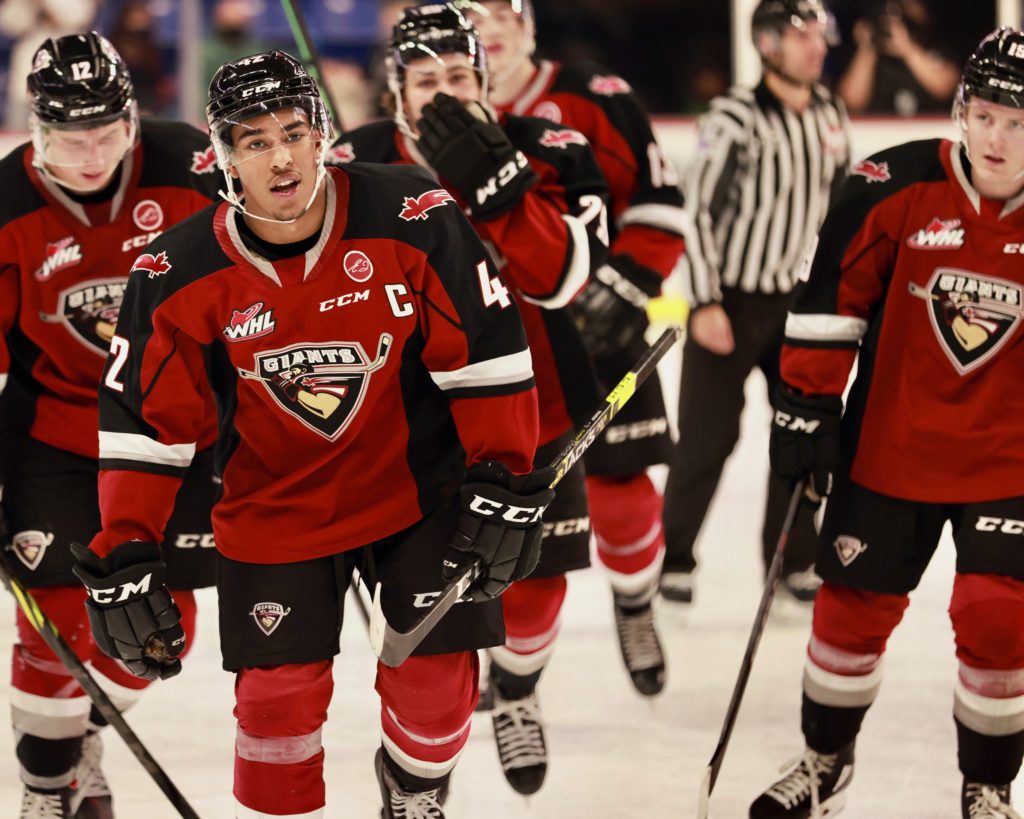 The 588 day wait between Giants games at the Langley Events Centre was worth the wait. Friday night in front of a half-capacity crowd of 2638 strong, the Vancouver Giants (2-0) earned a 6-4 victory over the visiting Prince George Cougars (0-2). Justin Sourdif (1G, 2A), Ty Thorpe (1G, 2A) and Mazden Leslie (3A) each had three points for the Giants while Adam Hall chimed in with two goals. Jesper Vikman earned his second straight victory in goal, turning aside 32 of the 36 shots fired his way. Hudson Thornton led the way for Prince George with a goal and two assists.

GIANTS VICTORIOUS IN THEIR LEC RETURN

PG – Carter MacAdams opened the scoring for the Cougars at 11:15 in close off a Mitch Kohner feed from behind the Giants goal. Fischer O’Brien earned the second assist.

VAN – Adam Hall quick responded with his first of two goals on the night for Vancouver. From beside the left goal post, Adam Hall snuck a low shot past Cougars starter Taylor Gauthier. Justin Sourdif and Mazden Leslie both earned assists on the goal that came at 13:35.

VAN – Justin Sourdif then moved the Giants ahead 2-1 thanks to a power play goal at 16:23. Sourdif followed up a Ty Thorpe rebound, and backhanded home his second goal in as many games. Ty Thorpe and Payton Mount both assisted.

VAN – Ty Thorpe increased the Giants lead to 3-1 at the 18:41 mark when he deflected home a Mazden Leslie point shot which came as a direct result of a Giants faceoff win in the offensive zone.

PG – Early in the second, Kyren Gronick moved Prince George back within one when he finished off a three-way passing play with Riley Heidt and Craig Armstrong. Gronick’s second of the season came at 1:15.

PG – Hudson Thornton then evened the score at 3-3 when his shot from the left-wing circle deflected off a Giants defenceman and past Jesper Vikman. Thornton’s goal was unassisted at 7:25.

VAN – At 12:31, rookie Ethan Semeniuk gave the Giants their second (and final) lead of the game. The 16-year-old rookie from Fort St. John followed up a Mazden Leslie shot, and knocked home his first career WHL goal to make the score 4-3. Fellow rookie Ty Halaburda earned the scond assist.

VAN – At 5:05 of the third period, Justin Sourdif and Adam Hall combined for the “Play of the Night” in the Western Hockey League. Sourdif made a nifty move down the right wing, slipped the puck through his legs, and fired a puck towards the Cougars goal. Adam Hall crashed the net, and redirected Sourdif’s feed home for his second of the night and third of the season. This goal would serve as the game winner.

VAN – Justin Lies supplied some insurance for the G-Men at 14:42 when he finished off a two-on-one rush with Ty Thorpe. Zack Ostapchuk earned the second assist on Lies’ first marker of the 2021-2022 season.

PG – A late goal from Jonny Hooker moved the Cougars back within two at the 19:20 mark. Hooker deflected Ethan Samson’s shot home for his second of the season.

Next Giants Game: Saturday, October 16th against the Kamloops Blazers at home.