Giants Head Into Holiday Break After A Road Win in Kelowna 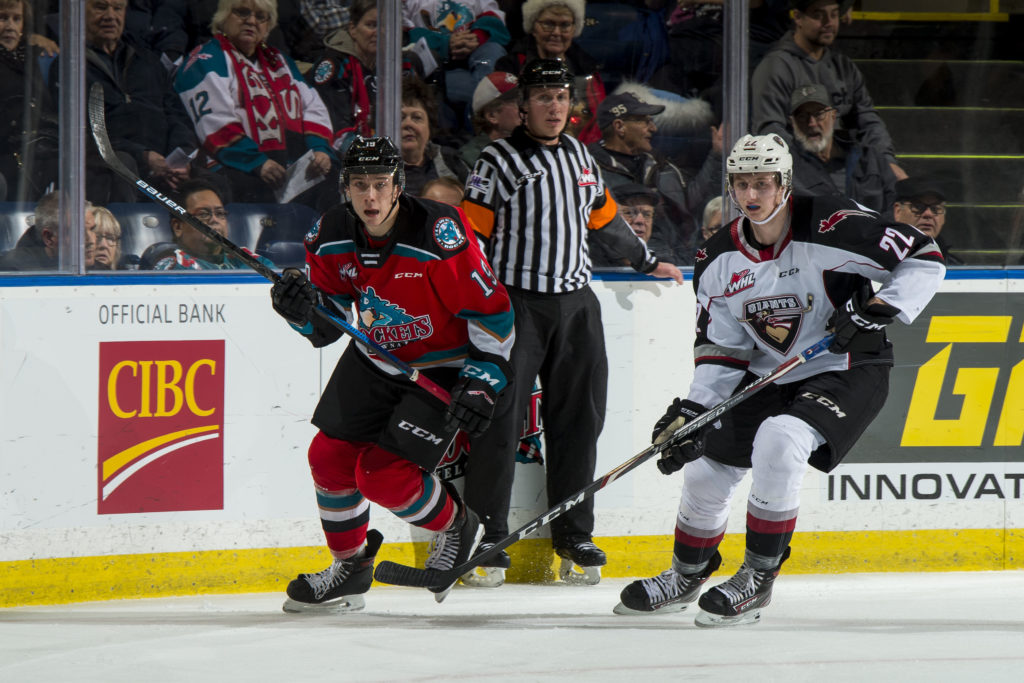 The Vancouver Giants are heading into their holiday break on a high note. Wednesday night at Prospera Place in Kelowna, the Vancouver Giants (15-15-1-1) earned a 4-3 victory over the Kelowna Rockets (18-11-1-2). Tristen Nielsen and Alex Kannok Leipert both posted a goal and an assist for the Giants while Tyler Preziuso and John Little also scored. Conner McDonald set up all three Kelowna goals which came courtesy of Matthew Wedman, Jadon Joseph and Pavel Novak. David Tendeck made 25 saves in net for Vancouver to secure his ninth win of the season.

VAN – Alex Kannok Leipert opened the scoring for the Giants at 3:34 off the rush from the right-wing. His shot deflected off Rockets goaltender Roman Basran’s right arm and in for his second of the season.

VAN – John Little padded the Giants lead to 2-0 on a power play at 6:06. The rookie charged hard to the net from the left-wing and deflected a Seth Bafaro feed past Basran for his first career WHL goal. Alex Kannok Leipert earned the second assist.

VAN – Tristen Nielsen increased the Giants lead to 3-1 off the rush at 9:44. His shot from the left-wing circle deflected off the crossbar, and off a Rockets defender before crossing the line. For Nielsen it was his  team-leading 16th goal of the season.

KEL – Jadon Joseph countered for Kelowna at 11:16 off a low shot from the slot that snuck through the pads of David Tendeck. Joseph’s first goal as a Rocket marked his eighth of the season.

VAN – Tyler Preziuso made it a 4-2 game for Vancouver at 14:20 off a feed from Tristen Nielsen. Preziuso’s fourth goal in a span of four games stood as the game winner. Evan Patrician also assisted on Preziuso’s 13th marker of the year.

KEL – The game’s final goal came 50 seconds later courtesy of Matthew Wedman. The 20-year-old parked himself in front of the Giants goal and re-directed a Conner McDonald shot home for his ninth goal of the season. That’s as close as the Rockets would come however as the Giants managed to hold on in the final minuts.

Up Next: A holiday break for the Vancouver Giants. They return to action on Friday, December 27th against the Victoria Royals.