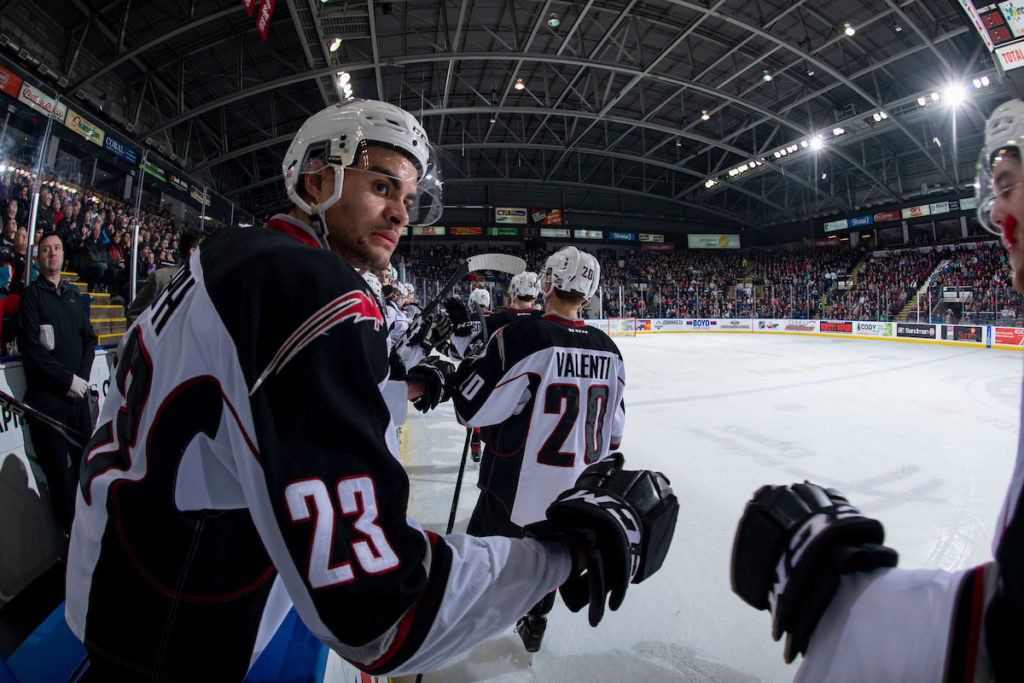 Saturday night at Prospera Place in Kelowna the Vancouver Giants (48-15-3-2) dropped a 3-2 overtime decision to the Kelowna Rockets in their final regular season game of 2018-19. Mark Liwiski scored at 3:40 of overtime to extend the Kelowna Rockets season to at least Tuesday night. Justin Sourdif and Jadon Joseph responded with goals for the Giants who also got 32 saves from goaltender David Tendeck. Brayden Watts assisted on both Giants goals.

VAN – 12:46 into the first period the Giants got on the board first when Justin Sourdif (23) converted off a Dallas Hines rebound. Brayden Watts also assisted on Sourdif’s power play marker. The Giants finished their night one-for-one on the power play.

KEL – 80 seconds later the Rockets caught a break when Cayde Augustine’s shot from the left-wing point bounced off a Giants defenceman and past David Tendeck to tie the game at 1-1.

KEL – Alex Swetlikoff (6) put Kelowna ahead 2-1 at 15:29 when he converted off his own rebound off a wrap-around chance.

VAN – With less than a minute remaining in the game and their net empty, the Giants tied the game 2-2 when Jadon Joseph’s blast from the right-wing point snuck through traffic and by Rockets netminder Roman Basran. For Joseph it was his 22nd of the season and was assisted by both Brayden Watts and Milos Roman.

KEL – After they were unable to convert on an overtime power play, the Kelowna Rockets extended their season when Mark Liwiski charged wide down the left-wing and placed a low shot through David Tendeck’s legs to give the Rockets the 3-2 victory, forcing a one-game playoff play-in game with Kamloops Tuesday night.

Kelowna: 0/2 on the Power Play

Next Giants Game: Friday, March 22nd at home against Seattle in Game #1 of their first-round best-of-seven series.