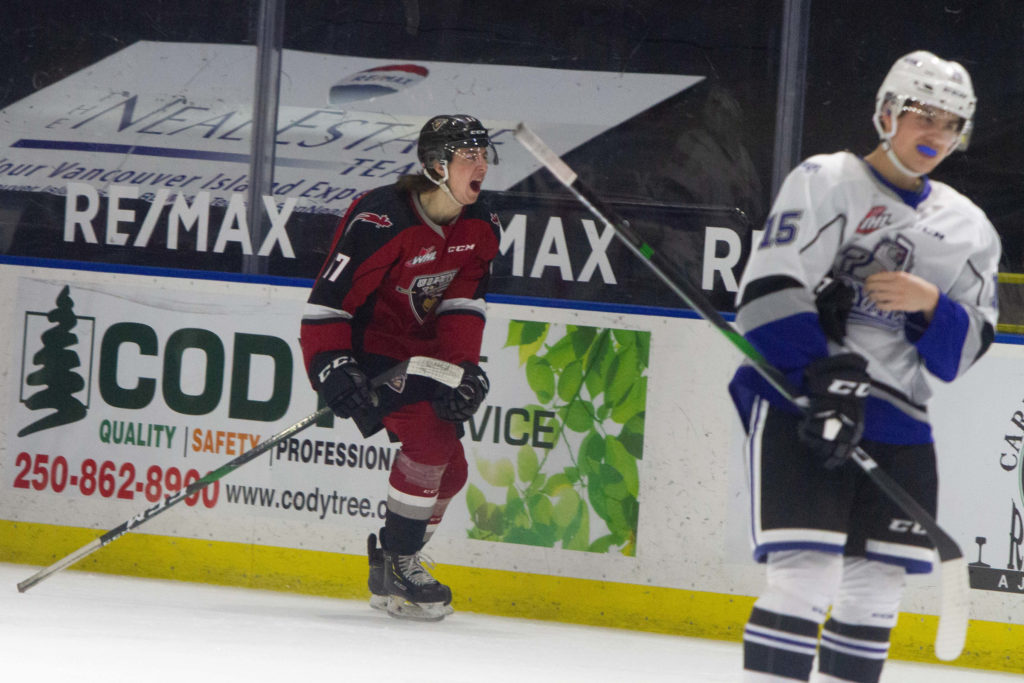 Saturday night in Kelowna, the Vancouver Giants snapped a four-game winless streak with a 5-4 shootout victory over the Victoria Royals. Justin Sourdif and Tristen Nielsen both scored in the shootout, while Kaden Kohle, Alex Kannok Leipert, Adam Hall and Connor Horning provided goals in regulation for the Giants (10-7). Brayden Tracey (2A), Brandon Cutler (1G, 1A) and Tarun Fizer (1G, 1A) each had two points in response for Victoria who got 38 saves from goaltender Connor Martin. The Giants received 15 saves from Drew Sim who improved his record to 4-1. For the Giants it was their fifth consecutive win this season against their rivals from the Island.

VIC – 1:46 into the game, Carter Dereniwsky notched his first career WHL goal for Victoria to stake them to a 1-0 lead. Brandon Cutler forced a turnover at the side of the Giants goal, and the puck came right out in front to Dereniwsky who did the rest.

VAN – The Giants evened the score at 7:01 when Connor Horning’s shot from the right-wing point snuck through the legs of Royals netminder Connor Martin. Eric Florchuk earned the lone assist.

VAN – With five minutes remaining in the period, Adam Hall gave Vancouver a 2-1 lead off a Bryce Bader rebound. Justin Lies earned the second assist for the Giants who snapped an 0/15 power play slump in the process.

VIC – Keanu Derungs tied the score for Victoria on five-on-three power play. Derungs one-timed home a pass from the right-wing circle at 2:39 to make the score 2-2.

VIC – 21 seconds later Brandon Cutler gave Victoria the lead on a five-on-four power play, as he went upstairs in close on Drew Sim for his seventh of the season. Brayden Tracey and Tarun Fizer both earned helpers.

VAN – Back came the Giants at 4:29. Alex Kannok Leipert snuck into the slot from the left-wing point, and knocked home a feed from Kadyn Chabot to tie the score at 3-3.

VAN – 33 seconds later the Giants took the lead when Kaden Kohle pounced on an Alex Kannok Leipert rebound and knocked it past Connor Martin’s glove to make the score 4-3.

VIC – Royals captain Tarun Fizer tied the score off a shorthanded rush. His shot from the left-wing circle snuck over the right soulder of Drew Sim and in for his fourth of the season. Fizer’s goal came unassisted.