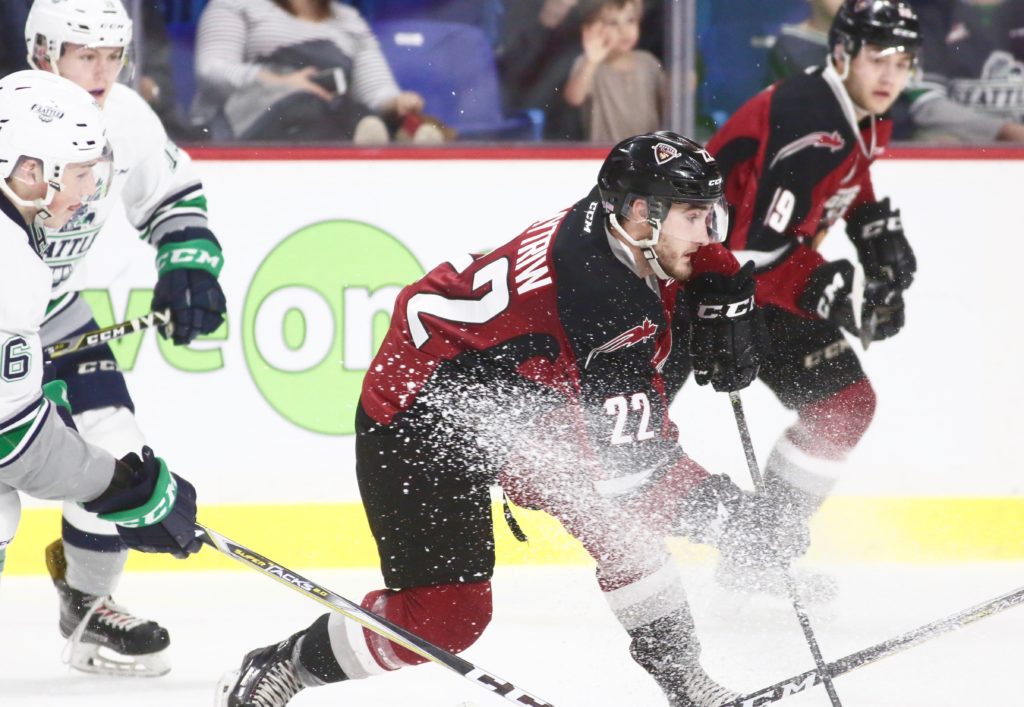 Two of the three regulation losses this season for the Vancouver Giants have come at the hands of the Seattle Thunderbirds. Saturday night at the Langley Events Centre the Giants surrendered two goals apiece in the first and second period in what ended in a 5-1 loss to the visiting Thunderbirds. Matthew Wedman paced the Seattle attack with two goals while goaltender Liam Hughes made 41 saves on 42 shots faced in the Seattle net to earn the victory. Milos Roman had the Giants lone goal in the third period while goaltenders David Tendeck and Trent Miner combined for 19 saves on 24 shots faced. It was the first regulation home loss for the Giants in 29 days.

Matthew Wedman put Seattle ahead 1-0 at 8:08 of the first period when he knocked Nolan Volcan’s rebound past Giants starter David Tendeck. The referees reviewed the play as it appeared Wedman may have kicked the puck into the net from inside the goal crease – But the referees ruled good goal. Exactly 10 minutes later Samuel Huo made it 2-0 Seattle when he pounced on a Giants defensive-zone turnover and beat David Tendeck from the left-wing circle for his first of the season.

Early in the second period the T-Birds struck twice in a span of a minute and 16 seconds to push their lead to 4-0. Noah Philp snagged his team-leading ninth of the season at 4:46 then Matthew Wedman stuffed a rebound past Tendeck at 6:02. Tendeck was removed from the Giants net at that point, having allowed four goals on 12 shots faced.

The first 30 minutes were rather uneventful for Seattle goaltender Liam Hughes, but the final 30 would be anything but. Hughes was tested often in the final half of the second period, and ended up making 17 saves in the middle frame to help send his team into the second intermission still leading 4-0.

At 4:36 of the third period the Giants finally solved Hughes when Milos Roman wired his sixth of the season past his glove from the slot. Brayden Watts and Justin Sourdif both earned assists on the play.

Michael Dyck’s Giants kept pressing, but Hughes made a handful of timely saves to keep his team comfortably ahead. He made 16 saves on 17 shots faced in the final period – Many of which were off quality looks. One of his best stops came with his glove, point-blank off Dawson Holt. For the second time this season, Liam Hughes earned first-star honors in Langley.

Seattle forward Dillon Hamaliuk ended all hopes of Vancouver comeback at the 17-minute mark of the final period when he dangled his way through the Giants defense and tucked home a backhand shot past Trent Miner for his seventh of the season. 5-1 would end up as the final score with the T-Birds improving their record to 7-3-2-0 on the season and 2-0 against the Giants.

The G-Men finished the night zero-for-seven on the power play while the T-Birds went scoreless on all three of their power play attempts.

Despite the loss, the Giants remain at the very top of the B.C. Division and the Western Conference with their record of 10-3-2-0 and they’ll look to climb back into the win column Sunday when they host the Brandon Wheat Kings at 4:00 PM.