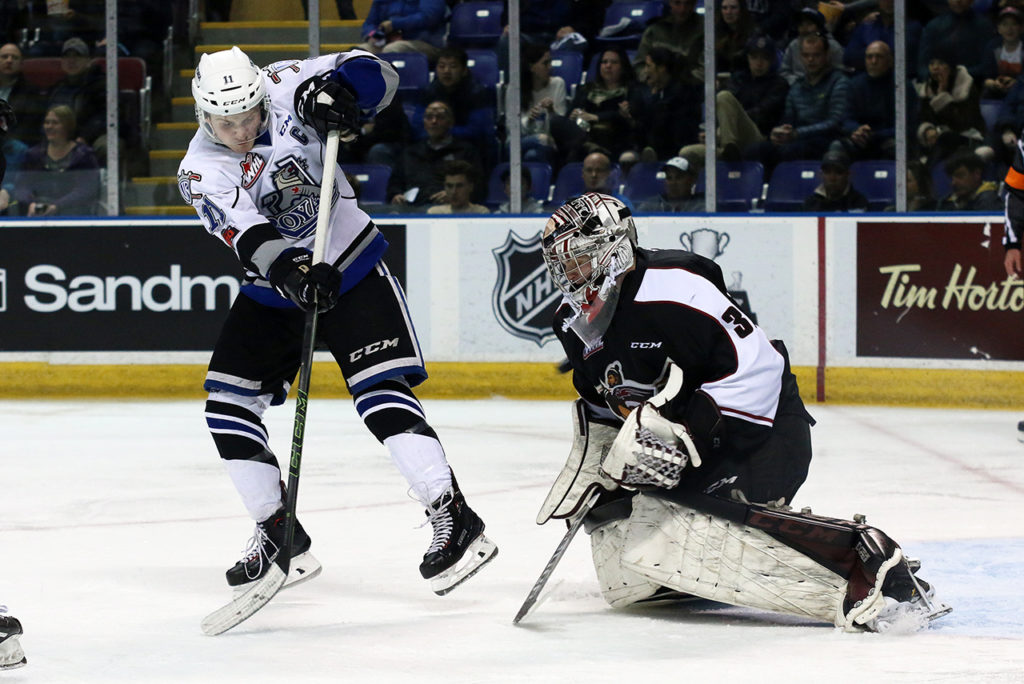 The Vancouver Giants are coming home tied 1-1 in their first-round playoff series with the Victoria Royals. Saturday night in front of 5272 strong the Victoria Royals held off the Giants by a 5-4 score. Royals forward Jeff de Wit broke up a 4-4 tie late in the second period with a goal off a two-on-one rush. That goal stood as the game-winner as the Royals survived a 13-shot onslaught in the third period by a desperate Giants team. Dawson Holt had two goals for Vancouver while Milos Roman and Brennan Riddle added singles. Noah Gregor, Jared Freadrich and Tanner Kaspick all had multi-point games for Victoria who also got 33 saves from goaltender Griffen Outhouse. Final shots were 37-26 for the visiting Giants.

Victoria took a 3-1 lead into the first intermission. Braydon Buziak struck at 8:44 of opening period to give the Royals their first lead of the series. Noah Gregor then snuck his first of the series past Giants starter Trent Miner off the rush at 15:04 to increase the score to 2-0.

90 seconds later Giants forward Dawson Holt parked himself in front of the Royals goal and deflected home a Matt Barberis point-shot past Griffen Outhouse to make it 2-1 game. Less than a minute later though Royals rookie Tarun Fizer snuck his first of the playoffs past Miner off a shot from the right-wing to help Victoria regain their two-goal lead. Shots were 11-10 for Victoria after one.

Vancouver struck twice in the first 4:26 of period two. First Brennan Riddle’s point-shot from the left-wing beat Outhouse to make it 3-2. Then Mlios Roman cut to the front of the net and snuck his second of the series past Outhouse’s glove to get the Giants back on even terms.

The first five power plays of the game were awarded to the Royals and although the Giants managed to kill off the first three, Victoria clicked on their fourth attempt when Jared Freadrich’s point-shot snuck past Trent Miner at 12:01 of the second to give Victoria their second lead at 4-3.

17 seconds later the Giants once again found an answer when Dawson Holt, again parked in front of the Royals net tipped home a point shot – This time off the stick of Bowen Byram. The score was tied 4-4 at the 12:18 mark of the second period.

Tempers erupted less than a minute later when Royals defenceman Chaz Reddekopp collided with Giants forward Brayden Watts along the left-wing boards. Watts left the game and did not return, yet thanks to a retaliation call, the Giants were the only team penalized on the play. Victoria did not score on their fifth straight power play.

The teams traded chances in the waning minutes of the second and with under two minutes to go in the middle frame, the Royals snagged what would end up being the game-winner.

Off a two-on-one rush, Royals winger Matthew Phillips raced down the right wing, centered a perfect pass across the ice to linemate Jeff de Wit, and from there de Wit one-timed the pass up and over the left shoulder of Trent Miner to give the Royals their third (and final) lead of the night. Shots through two were 24-22 for Vancouver despite Victoria’s five power play chances. The Giants did end up with one power play on the game which was unsuccessful.

Jason McKee’s Giants dominated the third period, outshooting Victoria 13-4, but Griffen Outhouse stopped everything the Giants fired his way and ultimately helped his team hang on to a 5-4 victory which evened the first-round series at 1-1.

Now the series shifts to the Langley Events Centre where the Giants and Royals will play Game 3 on Tuesday at 7:00 PM. With five games potentially remaining in the series the Giants have the possibility of playing three of them at home.