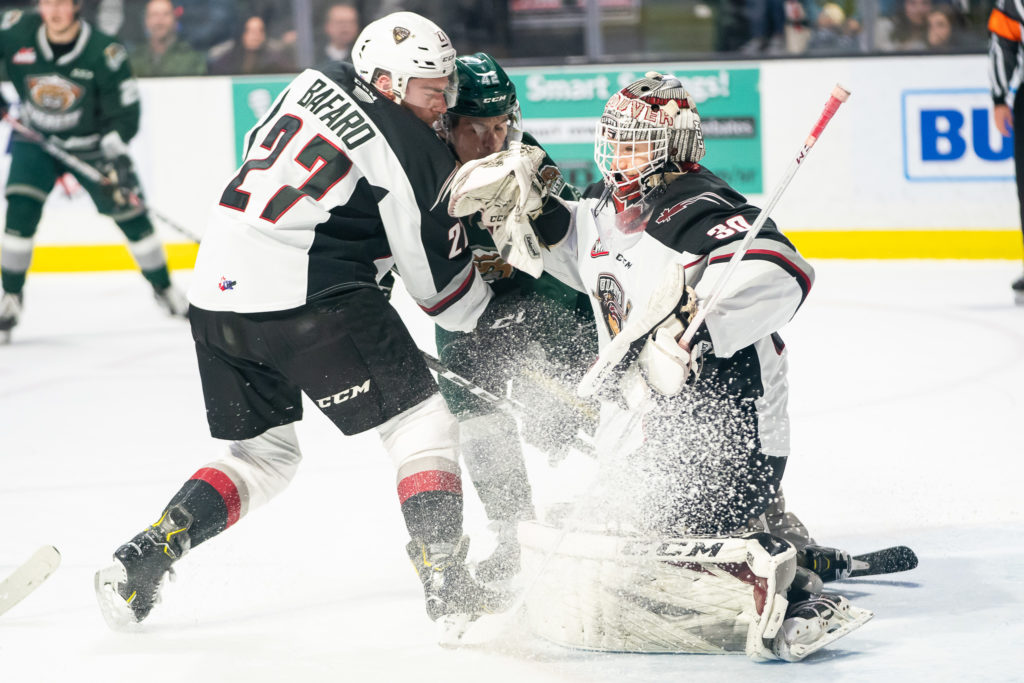 Saturday night in Everett, WA the Vancouver Giants (14-14-1-1) dropped a 3-2 decision to the Everett Silvertips (22-6-2-0). Bryce Kindopp scored twice for Everett, including their Teddy Bear Toss goal at 1:52 of the first period. Tyler Preziuso and Justin Sourdif responded with goals for the Giants who outshot Everett 27-20.

EVT – Bryce Kindopp’s first goal of the night came just a minute and 52 seconds in. The Silvertips leading scorer knocked his own rebound past David Tendeck off a shot through traffic from the slot. Cole Fonstad and Ronan Seeley assisted.

EVT – Gianni Fairbrother added to Everett’s lead at 16:46 of the first on a power play. His one-timer from the top of the right-wing circle snuck past the stretched left leg of Giants starter David Tendeck. Olen Zellweger and Ronan Seeley both drew the assists.

VAN – A minute and 13 seconds later the Giants got on the board when Tyler Preziuso knocked a Michal Kvasnica rebound past Dustin Wolf and home for his 12th goal of the season. Tristen Nielsen also earned an assist on that goal, giving him 11 points in his past seven games.

EVT – Bryce Kindopp pulled the Silvertips back ahead by two goals at 12:57 on a power play re-direct. He parked himself in close and tipped a Cole Fonstad feed past Tendeck for the eventual game-winning goal.

VAN – The Giants pushed back within one goal at the 17:38 mark when Justin Sourdif’s shot from the slot went up and over the glove of Dustin Wolf. Captain Alex Kannok Leipert drew the lone assist on Sourdif’s 12th of the season.

Next Giants Game: Tuesday night at home against the Prince George Cougars at 7:00 PM.