Giants Fall 8-2 to the Raiders, Now Trail 2-1 in the WHL Championship Series 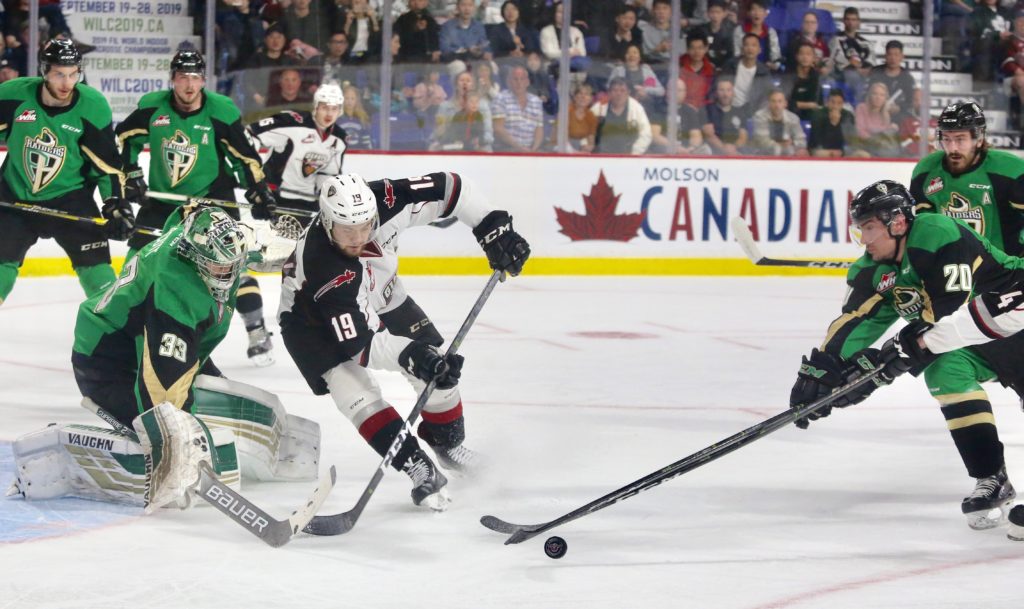 Tuesday night at the Langley Events Centre the Vancouver Giants fell 8-2 to the Prince Albert Raiders in Game 3 of the 2019 Rogers WHL Championship Series. Brett Leason (2G, 1A) and Dante Hannoun (1G, 2A) combined for six points for the Raiders who scored seven times in the first period en route to their second victory in as many games. Brayden Watts and Yannik Valenti responded with power play goals for the Giants who now trail a playoff series for the first time in 2019. The teams combined for 16 power plays with the Raiders finishing four-for-eight and the Giants were two-for-eight. Game 4 goes tomorrow night at 7:00 PM.

PA – 41 seconds into the game, Parker Kelly (5) snapped a shot through a screen and past David Tendeck to make it 1-0.

PA – Ozzy Weisblatt (5) extended the Raider lead to 2-0 at the 2:27 mark. David Tendeck was pulled from the Giants net in favour of Trent Miner. Weisblatt’s goal came via the power play.

PA – Brett Leason (8) extended his point streak to six games when he tallied at 4:15. Aliaksei Protas and Sergei Sapego assisted.

PA – With a delayed penalty on the way and the Raiders already up five skaters to three, Cole Fonstad (2) one-timed home a feed from Parker Kelly to make it 4-0 at 6:33.

PA – Brett Leason’s second of the night and ninth of the playoffs came at 8:20 on a power play to make it 5-0.

PA – With 16 seconds remaining in the first, Noah Gregor (10) roofed a backhand shot past Trent Miner’s glove to give the Raiders their seventh goal of the period.

PA – Late in the second period Dante Hannoun deflected a Brett Leason shot past David Tendeck (who started the second period for the Giants) to give the Raiders an 8-0 lead. For hannoun it was his 12th goal of the playoffs.

VAN – With less than a minute remaining in the period, Brayden Watts snuck into the slot and one-timed a Lucas Svejkovsky feed from behind the Raider net to put the Giants on the board. It was Watts’ sixth goal of the playoffs.

VAN – The final goal of the game came at 14:44 off the stick of Yannik Valenti who one-timed a Bowen Byram feed from his office in the left-wing circle. Valenti’s third goal of the playoffs was also assisted on by Dylan Plouffe.

Prince Albert: 4/8 on the Power Play

Vancouver: 2/8 on the Power Play

Next Game: Tomorrow night at 7:00 PM at the Langley Events Centre