Giants Fall 6-3 to the Spokane Chiefs Saturday At Home 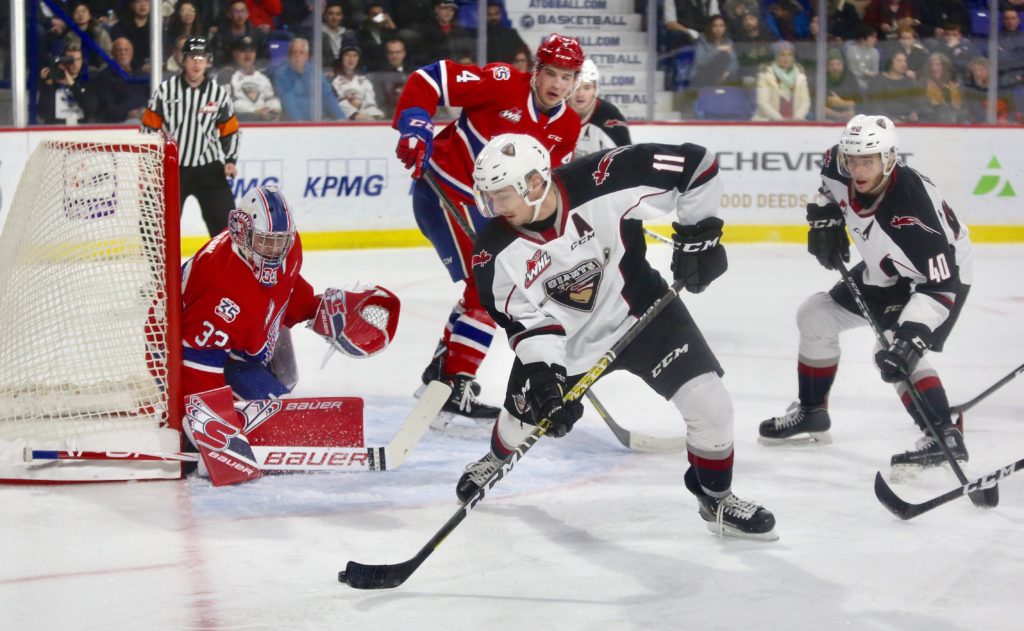 Saturday night at the Langley Events Centre the Vancouver Giants (17-18-2-2) dropped a 6-3 decision to the Spokane Chiefs (22-13-4-1). Eli Zummack paced the Chiefs with two goals and two assists to extend his point-streak to 17 straight games. Five other Chiefs recorded multi-point games. The Giants received first period goals from Tristen Nielsen, Tyler Preziuso and Zack Ostapchuk. Both Alex Kannok Leipert (3 assists) and Eric Florchuk (2 assists) added multi-point games for the Giants. For the Chiefs it marked their second victory in as many nights against the Giants.

SPO – Filip Kral struck a minute and 38 seconds into the first to put the Chiefs ahead 1-0. Kral’s 10th goal of the season came off an Eli Zummack rebound.

VAN – Tristen Nielsen answered with a power play goal at 6:14. For Nielsen it was his 20th goal of the season, marking the first time he’s reached that plateau in his four-year WHL career. Alex Kannok Leipert and Eric Forchuk both assisted.

VAN – The Giants power play clicked again at 9:59. This time it was Tyler Preziuso who snuck home his 15th of the season from the left side of the Chiefs net. Alex Kannok Leipert and Eric Florchuk both factored into that goal as well.

VAN – With 42 seconds left in the period, Zack Ostapchuk (4) tipped home a pass from Kaden Kohle off a two-on-one rush to push the Giants ahead by a 3-2 score.

*Tristen Nielsen was stopped on a penalty shot by Spokane netminder Lukas Parik at 8:41.

SPO – Adam Beckman’s 30th goal of the season moved Spokane back even at 15:04 of the middle frame. Beckman’s goal came off a feed from Jack Finley from behind the net.

SPO – Eli Zummack put Spokane back on top at 9:35 of the third period off another slick setup from Luke Toporowski. Graham Sward also factored into the eventual game-winning goal with his second assist of the game.

SPO – Leif Mattson’s empty-net goal with nine seconds to go in the third, moved the Spokane lead to 6-3. Both Eli Zummack and Adam Beckman assisted.

Next Giants Game: Friday night at home against the Victoria Royals at 7:30 PM. That night former GM Scott Bonner will be added to the Vancouver Giants Wall of Honour.