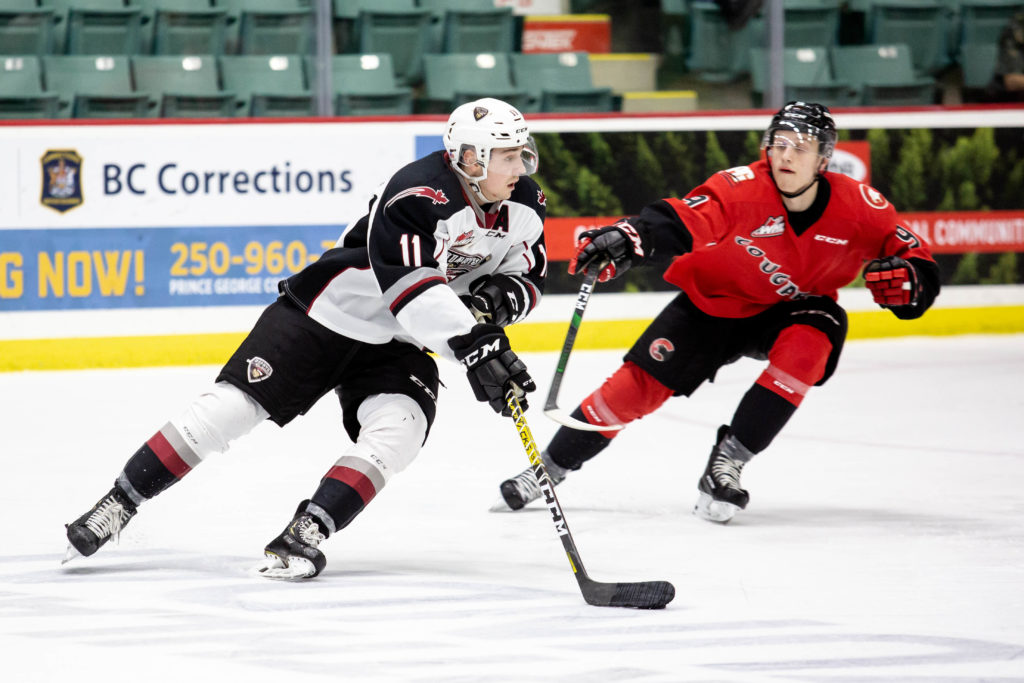 Friday night in Prince George, the Vancouver Giants (32-24-3-2) dropped a 5-4 decision to the Prince George Cougars (19-34-4-4). Josh Maser scored three times for Prince George while Tyler Preziuso responded with two goals for Vancouver. The G-Men badly outshot the Cougars by a 42-20 margin, and each team scored twice on the power play.

PG – At the 1:30 mark, the Cougars opened the scoring off a two-on-one rush. Jonny Hooker (14) finished off an Ilijah Colina pass to put Prince George up 1-0.

VAN – Back came the Giants at 15:56. Michal Kvasnica pounced on a Holden Katzalay rebound and tucked home his ninth goal of the season to tie the game 1-1.

VAN – Bowen Byram (12) put the Giants ahead 2-1 with a shot from the left-wing circle on the power play. Tristen Nielsen and Milos Roman both assisted.

VAN – Tyler Preziuso responded one minute and 18 seconds later with his 25th, lifting the Giants to a 3-2 lead. Preziuso stole the puck from a Cougars defenceman and roofed a shot home from in close.

PG – Majid Kaddoura moved the Cougars back even off the rush at 18:11. His backhand shot appeared to deflect off a body in front of the Giants goal and in. Kaddoura’s fifth goal was set up by Taylor Gauthier.

PG – Josh Maser (27) put Prince George ahead 4-3 56 seconds into the final period when he knocked home a Jack Sander rebound.

VAN – Tyler Preziuso (26) responded with a power play goal at 13:53 for the Giants to push the score to 4-4. Preziuso’s second of the game was assisted by Bowen Byram and Eric Florchuk.

Next Game: The Giants and Cougars will meet again tomorrow night at 7:00 PM in Prince George.