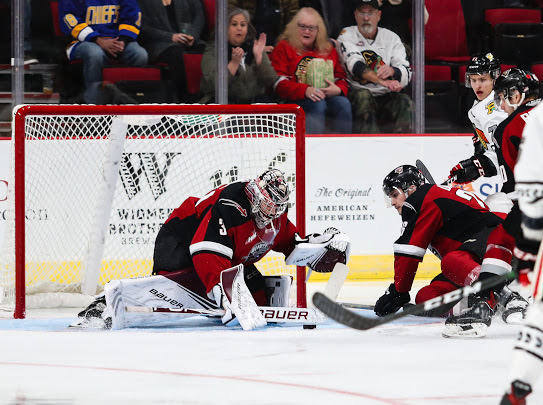 Saturday night in Portland, the Vancouver Giants (10-8-1-1) earned a single point in a nine-round 2-1 shootout loss to the Portland Winterhawks. Justin Sourdif had the Giants goal in regulation while Jack O’Brien responded for Portland. Goaltenders Trent Miner (Vancouver) and Joel Hofer (Portland) were both outstanding for their respective teams, combining for 57 saves. Portland forward Mason Mannek secured the shootout winner in Round 9 to help the Winterhawks to their 11th victory. The Giants have now earned at least a point in each of their past five games.

GIANTS FALL IN A DRAMATIC NINE-ROUND SHOOTOUT IN PORTLAND

VAN – 4:34 into the game, Justin Sourdif put the Giants ahead 1-0 with his ninth of the season. Dylan Plouffe supplied the lone assist on the play.

POR – At 10:24, rookie Jack O’Brien (2) responded for Portland when he re-directed home a point shot from Nick Cicek past Trent Miner.

Vancouver Giants: 0/4 on the Power Play

Portland Winterhawks: 0/4 on the Power Play

Next Giants Game: Saturday, November 16th against the Prince George Cougars at the LEC.