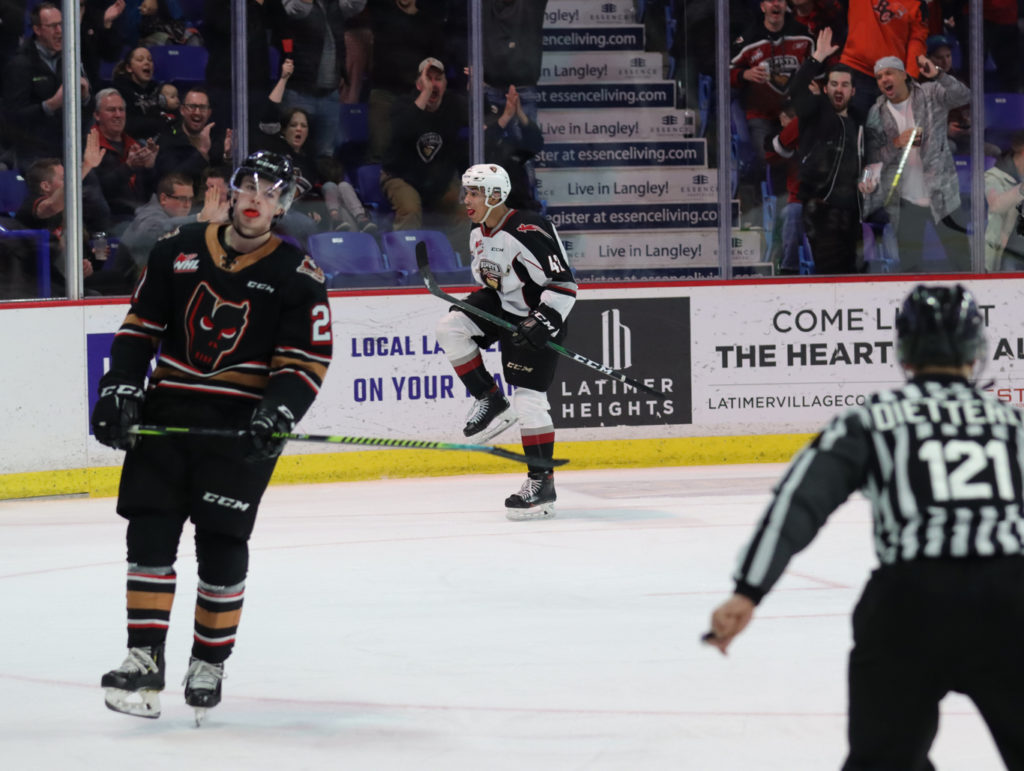 In front of 4139 strong on Friday night, the Vancouver Giants completed one of their most thrilling victories in recent memory to extend their winning streak to a franchise record-tying 11 straight (regular season) games. Michael Dyck’s Giants (30-20-3-2) scored four unanswered goals in the third period to erase a 5-2 deficit and give themselves a 6-5 victory over the Calgary Hitmen. Justin Sourdif led the Giants with three goals, including the tying and winning markers. Bowen Byram (1G, 2A) and Tristen Nielsen (3A) also added three point nights for the Giants who are now ranked second in the B.C. Division standings. Luke Prokop responded with two goals for Calgary while three others had multi-point games.

CGY – Mark Kastelic tipped home a Jett Woo point-shot for his 33rd goal of the season at 7:29.

VAN – Eric Florchuk (20) buried a shot from the right-wing off the rush to put the Giants on the board.

VAN – 34 seconds later Justin Sourdif (22) converted off a cross-ice feed from Bowen Byram to move Vancouver within a goal.

CGY – Luke Prokop followed up a Riley Stotts rebound and knocked home his second of the night at 9:54 to make it a 4-2 lead for Calgary.

*Calgary’s Riley Fiddler-Schultz was stopped on a penalty shot by David Tendeck at 11:35 of the second period.

CGY – With 36 seconds left in the period, Orca Wiesblatt knocked a bouncing puck past David Tendeck in the slot to give Calgary the 5-2 cushion.

VAN – Bowen Byram (10) kicked off the Giants comeback bid at 4:47 off a shot from a tough angle along the left-wing that beat Jack McNaughton up high.

VAN – Sourdif then completed his hat-trick and the comeback for the Giants with a breakaway goal at 15:53. The Giants would not relinquish their 6-5 cushion despite a valiant pushback from the Hitmen in the late stages of the game.

Next Game: The Giants look for their 12th straight win tomorrow night when they head to Everett to face the Silvertips at 7:05 PM.